With yesterday's signing by the Los Angeles Dodgers of Bobby Abreu who was recently released by the Anaheim Angels, I took a brief look at his statistics to see exactly what his recent offensive output has been. After seeing them, I was immediately reminded of another ex-Angel who played one final year in Dodger blue: Garret Anderson, whose cliff dive at the plate of Acapulcoesque proportions resulted in Ned Colletti releasing him on August 10 of his only season in Los Angeles.

As a very rough "analysis", I decided to compare OBP, Slugging percentage and a composite of those statistics, OPS, for the last four seasons for each player onto a graph to see just how similar the declining patterns might actually be. And because Vladimir Guerrero is still unsigned, worked out for the division-rival Arizona Diamondbacks in the Dominican Republic recently and is also an ex-Angel at the tail end of his career, I threw him into the mix also, but only for his last three actual seasons, with this year left blank, since he is unsigned but available. Also note that for Anderson and Abreu, the comparisons are at the same age, while Guerrero is a year younger.

Here's the resulting graph (click on it to view larger in a new tab/window): 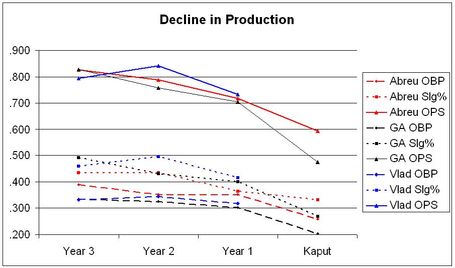 Obviously this is a fairly crude way of looking at it, but some clear similarities in the decline rates are evident, especially comparing Anderson and Abreu. It would be unfair to deduce from this simple exercise that BA will flail at the plate a la GA for the rest of the year with an OPS winding up in the low .500s, but it is clear that one should not be surprised if such an outcome occurs.

Adding a fourth player to the graph becomes too cluttered, but if ex-Angel Adam Kennedy was also included, one would seem similar trends in decline, but shifted lower. His OPS graph line [.758, .655, .632, .422] was particularly akin in shape to Anderson's and Abreu's.

Assuming this is Abreu's and/or Kennedy's last major league season, they could join a list that has grown in recent years: players that have had some success and longevity in the majors and finished out their careers with some dismal offensive numbers well below their career averages while toiling only that one year in Dodger blue.

For Loretta, thanks to Game 2 of the 2009 NLDS, all is forgiven. And man, could Boog Powell take a walk.

Stats from baseball-reference.com. Stats are through Thursday's games.