Share All sharing options for: Exciting Night At Dodger Stadium

The pregame festivities began with R&B singer Jeffrey Osborne, longtime veteran of the Fabulous Forum and Staples Center before Lakers games, signing what has been the best version of the national anthem at Dodger Stadium this season.

Then in taped introductions, Vin Scully introduced Rachel Robinson, Don Newcombe, and new ownership partner Magic Johnson. Magic got the loudest cheers of the evening, then escorted the group to the mound, where Newcombe threw the ceremonial first pitch to Matt Kemp. 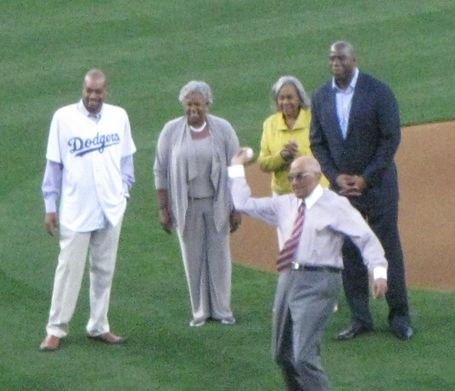 Usually a child or two get the honors of announcing "It's time for Dodger baseball," but tonight those duties fell to Magic, who couldn't help but smile as he delivered the words.

Top that all off with the Dodgers wearing Brooklyn caps tonight in honor of Jackie Robinson, and the Beastie Boys' "No Sleep Till Brooklyn" playing right before the game, you have yourself quite an exciting night at Chavez Ravine.