A look back 36 years ago at the first season of the legendary This Week in Baseball, including a memorable moment for an all-time Dodgers great, who experienced highs and lows at Wrigley Field.

Share All sharing options for: TWiB notes 1977: Don Sutton gets ejected in win

On a day that the Dodgers have reportedly agreed to a massive television contract that could be worth between $7-8 billion, it's important to look back.

I was 12 years old in 1988, which puts the Dodgers' last World Series year right in my wheelhouse, and explains why I have devoted so much time to looking back at the 25th anniversary of that team. Back in 1988, most home games weren't on television. In fact, several road games weren't even televised.

Our Dodgers games were limited to some road games on KTTV, plus the occasional game against the Cubs on WGN or the Braves on TBS. ESPN started broadcasting games in 1990, so back in 1988 our gateway to baseball outside of Los Angeles came mostly from two sources:

The latter was a weekly show hosted by Mel Allen, highlighting the big stories around the game for the previous week. The show still runs to this day, and the theme song I'm sure is in many of your heads while reading this.

Anyway, a few weeks ago the first season of This Week in Baseball (1977) was made available via iTunes, a fact I may not have even noticed were it not for a tweet from Jay Jaffe last week.

Digging into 1st episode of This Week In Baseball 1977, via iTunes. Quality of footage isnt great but seeing stars from my youth is a blast

I decided to plunk down the $27 for all 17 episodes, and so far the show has been quite a treat. I have only watched three episodes to date, and while I don't plan to recap every single episode like Matthew Callan at Amazin' Avenue, if I find something interesting related to the Dodgers I will pass it along.

Our first such instance comes in the third episode, which highlights a red-hot Cubs team playing at home. Chicago took two of three games from the Dodgers, then swept four from the Giants. At the end of the week (June 12), the Cubs were 36-19, though they would finish the year just 81-81.

The only loss by the Cubs that week came at the hands of the Dodgers, on June 8, with Don Sutton on the mound.

Sutton would make his fourth All-Star team in 1977, and started on the mound for the National League. This June 8 start against the Cubs helped his cause, as it pushed his record to 7-2, though it was memorable for something else.

Up 4-0 in the eighth inning with one out, a runner on first base and former Dodger Bill Buckner at the plate, Sutton knelt down to tie his shoes on the mound. 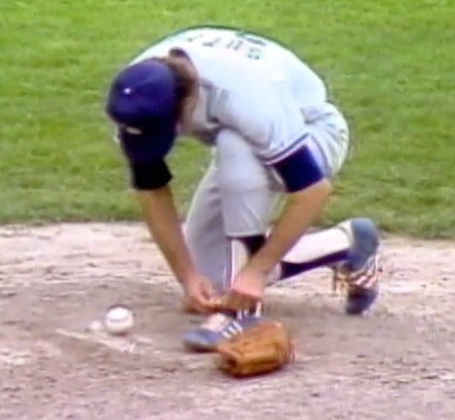 Now, this is nothing out of the ordinary, but after Sutton's laces are set he looks around then scrapes the baseball across the dirt, trying anyway possible to influence the ball in some small way. 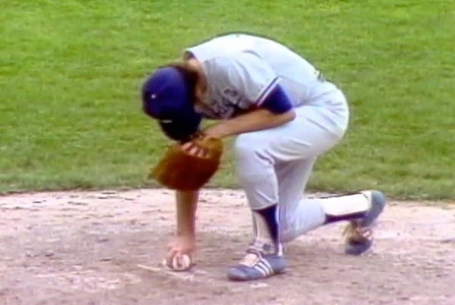 "Has Don done something improper? The umpire thinks so, and he gives Sutton the old heave ho," narrated Mel Allen. "Now, that really makes Sutton angry." 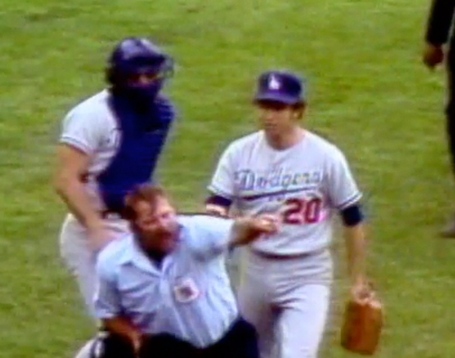 Sutton was ejected by home plate umpire Bruce Froemming, which started quite an argument from both Sutton and first-year manager Tommy Lasorda. Here, first baseman Steve Garvey and Lasorda try to restrain Sutton as he goes after Froemming. 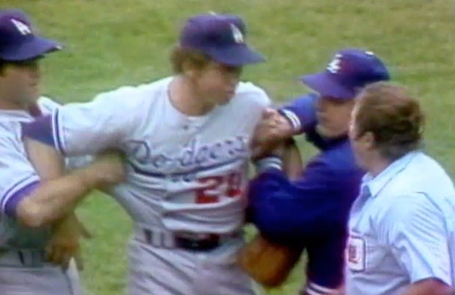 Keep in mind Sutton and scuffing the ball was nothing new. Sutton once famously quipped, when asked if he put a foreign substance on the baseball, "Not true at all. Vaseline is manufactured right here in the United States of America."

Even in Sutton's final season in 1988, at age 43, he couldn't escape the notion that he did a little extra to help the baseball. Sam McManis of the Los Angeles Times recounted a game from Shea Stadium that year that caused Sutton to get a little angry:

A New York television crew working Tuesday night's game, continually focused in on Don Sutton's hands as he rubbed the ball prior to pitches. Sutton, accused in the past of scuffing balls, did not have his hands checked by the umpiring crew. Sutton reacted angrily when told that the cameras were focused on him. "I guess for 22 years I've misread baseball," he said, sarcastically. "Apparently, people only watch the game to watch umpires umpire and TV play Columbo. Either that, or they have idiots upstairs running that TV crew."

Back to this 1977 game for a moment, Sutton ultimately accepted his fate with the ejection, and settled for allowing one run in 7⅓ innings, and a victory. Allen summarized the situation at Wrigley Field nicely, as a split screen showed both Sutton and Lasorda in separate arguments. 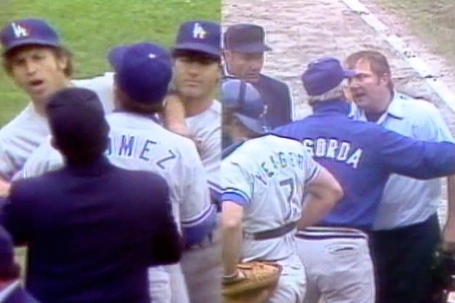 "See, the umpires had questioned Sutton earlier about the possibility of doctoring the baseball with a foreign substance, but his manager Tom Lasorda said it wasn't so. Unfair harassment by the officials or some such please, says he," Allen narrated. "Now whether this defendant had a case or not is hard to tell, but it's clear that some of his actions could only be ruled out of order. So Sutton finally becomes resigned to his punishment. But managers, like all lawyers, will argue until the cows come home."