The longtime utility man stood in at shortstop every day for two months in 1988, then stood in the on-deck circle before the biggest home run in Dodgers franchise history.

Dave Anderson was one of four first round picks by the Dodgers to play for the 1988 team (joining Mike Scioscia, Franklin Stubbs, and Chris Gwynn), and though he never quite became a regular he played a pair of important roles for the World Series champs.

The utility man filled in nicely for over two months at shortstop after the starter, Alfredo Griffin, had his hand broken by a Dwight Gooden fastball. But Anderson's most memorable role as a Dodger came in a game in which he technically never played.

With two outs in the bottom of the ninth inning of Game 1 of the World Series, down one run against closer Dennis Eckersley, Anderson stood in the on-deck circle with Mike Davis at the plate.

But if Davis could somehow reach base against Eckersley, the plan was for Kirk Gibson to hit, not Anderson.

"I was there because if Davis hits a home run, I bat and then go play shortstop," Anderson told T.R. Sullivan of MLB.com in 2010. "After he walks, Gibson comes up to pinch-hit. As you see him come up, you see me walking back to the dugout. But if Gibson gets a hit and ties the game, I pinch-run for him and then go in to play shortstop."

Manager Tom Lasorda wanted to maximize the crowd reaction to the injured Gibson.

"(Gibson) wanted to come out and stand in the on-deck circle and I told him no. I wanted him in the dugout because everybody in the ballpark knew he wasn't going to get in the game," Lasorda said in an MLB productions interview about the game. "I didn't want them to know that, so I put Dave Anderson on deck."

But the move was also about gamesmanship.

"I figured Eckersley would pitch more carefully to Davis with the right-hander on deck," Lasorda told Rick Weinberg of ESPN.com. "If he'd seen Gibson on deck, he would have pitched Davis differently."

With Anderson on deck, Davis drew a walk from Eckersley, and Anderson immediately retreated to the dugout in favor of Gibson. Here they are passing like two ships in the night: 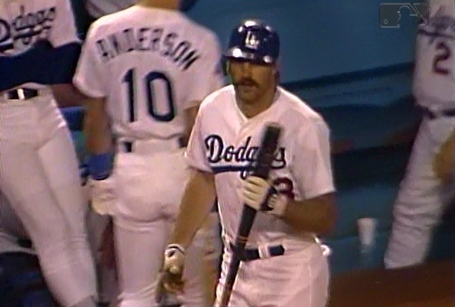 The rest, as they say, is history.

How acquired: Anderson was picked in the first round, 22nd overall, in the 1981 draft, a mere three picks after the Red Sox drafted Steve Lyons.

Prior MLB experience: Anderson played mostly shortstop and third base, with the occasional start at second base, in 459 games with the Dodgers from 1983-1987. He was mostly a part-time player, though he did start 94 games at shortstop (and 10 games at third base) in 1984, attempting to join fellow youngsters Steve Sax and Greg Brock in the Dodgers' new-look infield. But in those five years he hit just .228/.309/.305, a 73 OPS+, and never caught on as a regular.

NLCS performance: A back injury limited Anderson to just eight games played in September, then sidelined him against the Mets as he was left off the roster.

World Series performance: Anderson was added back onto the roster for the World Series, and he replaced Mike Sharperson on the 24-man roster against the Athletics. But aside from his decoy in Game 1, Anderson got into just one game during the fall classic. In the eighth inning of Game 3, in a 1-1 tie with John Shelby on first base, A's manager brought in southpaw and former Dodger Rick Honeycutt to face designated hitter Mike Davis. But Lasorda countered by replacing the left-handed Davis with the pinch hitter Anderson, who struck out swinging on five pitches.

Where he is now: Anderson has been coaching in some capacity in nearly every season since his playing career ended in 1992. He managed for seven years (1994-2000) in the Tigers' farm system, then managed the University of Memphis, his alma mater, from 2001-2004. Anderson returned to the Dodgers organization as minor league infield coordinator in 2006, before joining the Rangers in 2007.

Anderson managed Double-A Frisco in 2007, then moved to field coordinator for the Rangers' minor league system in 2008. Anderson moved back to the big leagues in 2009 as third base coach for Texas, a position he still holds. Part of his hands-on coaching duties with the Rangers include overseeing the infield defense, as well as coordinating the daily schedule during spring training.

With Josh Hamilton no longer playing in Texas, maybe Anderson's name won't be in the news as often as in recent years: