Fans can visit DodgersRewards.com and gain points for supporting the team online and through various social media outlets.

The Dodgers on Thursday launched an interactive rewards program, which gives points for supporting the team via various social media outlets, online, and at Dodger Stadium. The program can be seen at DodgersRewards.com.

The Dodgers say the program is the first of its kind in Major League Baseball.

"We are creating an interactive rewards portal for all things Dodgers," said Dodgers executive VP and chief marketing officer Lon Rosen. "Being a sports fan is about passion and competition, and we believe through this platform we are entering the next phase of fan loyalty with the ultimate goal of rewarding our fans for their support."

The program begins today, with sweepstakes running through Mar. 15 for the chance to win two tickets to Opening Day 2013, a mention from @Dodgers on Twitter, and a Sandy Koufax signed baseball. Future prizes include a private suite to a game, a jersey signed by the 2013 team, and throwing out a ceremonial first pitch on fan appreciation day.

Other rewards include discounts for Dodgers merchandise and a free week or month of MLBtv.

Fans can earn points based on supporting the team either at the ballpark, checking in through the MLB At the Ballpark mobile app, or through various venues online, including Facebook, Twitter, and Instagram. 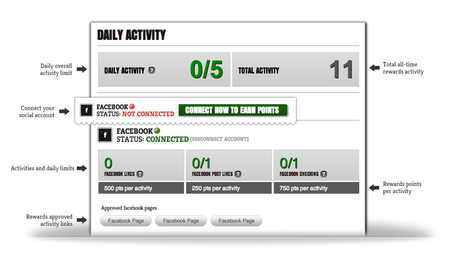 In case you were wondering about gaming the system, the FAQ page warns otherwise:

A post with the intent of gaming the system may warrant blocking or removing a user from the program. Setting up fake accounts on social networks with the intent to game the system and earn points may result in points being deducted or removal from the social rewards program. This includes setting up fake Twitter accounts, where the majority of tweets from that account are used to earn social rewards points (as an example an account that may be considered fake if it is opened within a few weeks of the program or an account that has been inactive for months that has less than 10 followers/friends and only Tweets/Posts about Rewards activity), tweeting the same message on multiple team accounts or multiple times, tweeting a photo that has no relevance to the team or using the same photo on multiple tweets, Tweeting multiple hashtags in the same Tweet. Additionally, activities on Facebook or Twitter that are posted then deleted or liked then un-liked in an effort to gain points are not permitted along with "sharing" posts on Facebook not categorized as public or with all friends (e.g. sharing with yourself of a limited number of your friends will not be counted).

To create this program the Dodgers have partnered with Lodestone Social Media, a company that has created similar programs for various colleges, which in turn provides the client with important demographic and behavioral data about it's support base.

"It is exciting to have the Dodgers and MLBAM as our partners," said Mark Drosos, president of Lodestone in a statement. "Their collective commitment to this program will prove to create an even stronger bond between the team and its fans."