The Dodgers on Tuesday announced more details of the improvements to Dodger Stadium for the 2013 season.

Most notable will be the new HD video boards in left field and right field. The new video screens will be the first 10mm 1080p LED displays in MLB. The Dodgers say the new scoreboard structures are 22% larger, but the active viewing area of both video boards will be 66% larger than before.

The existing message boards, in both outfield walls and around the stadium, will have upgraded displays as well.

There will be a new sound system with sounds directed to each seating section, minimizing echoes and migrating outside noise.

The wireless and cellular system will allow for increased connectivity throughout the ballpark, as Bill Shaikin of the LA Times noted there are 1,500 new data points in Dodger Stadium.

Each level will have wider concourses, including more walking space, more wheelchair locations, and drink rails for fans to place their drinks as they walk around the stadium. The wheelchair positions will each come with a companion seat and are set up in such a way that they can see the game even if someone stands up in front of them.

The concourses are made wider by the removal of between two and four rows of seats from each level. Dodgers CEO Stan Kasten wouldn't comment on how the seating capacity will be affected, telling reporters, "just assume the number is 56,000, and if you want you can count them yourselves."

The previously discussed changes to the box seats down each line, near the dugouts, will result in more foul territory. Kasten estimated the difference will be about six feet, per J.P. Hoornstra of the LA Daily News.

Notable in the rendering above are the walkways above each bullpen, which allow fans a new standing room view while walking around the stadium. The entrances to the overlooks will be on the field level, and though they abut the pavilion sections they two sections are not connected.

Each entrance, including the center-field entrances, is being given careful attention to create better circulation and enhanced concession and retail spaces. There will also be new field level "entry plazas."

Interactive playground areas will be added in the pavilion and reserve levels, including life-size bobbleheads, oversized World Series rings and retired number displays.

There will be food service enhancements to loge, reserve and upper reserve levels including new stands, cooking facilities and menus, though full details haven't yet been announced. More details are expected before the season.

The Dodgers will display many of the team’s historical items for the first time, including MVP awards, Cy Young awards and Gold Gloves awarded to Dodgers.

Jon SooHoo has new photos of the ongoing construction at Dodger Stadium. Here is another shot taken by DodgerTalk co-host David Vassegh: 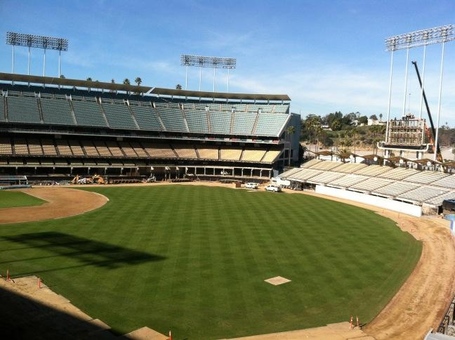 And one more shot by Bill Plunkett of the Orange County Reigster: 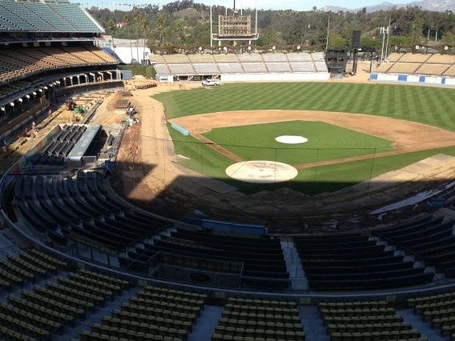