On Oct. 15, 1988, both league MVPs hit home runs for their only hit of the World Series. One was just a little more memorable than the other.

It was 25 years ago Tuesday that Kirk Gibson authored the greatest in-game moment in Dodgers franchise history. With two bad legs, the National League MVP hit a game-winning two-run home run to give the Dodgers a 5-4 victory over the heavily-favored Athletics in Game 1 of the 1988 World Series.

The Dodgers three days earlier dispatched the 100-win Mets in the NLCS, a team that beat them in 10 of their 11 regular season matchups. Now Los Angeles was set to host the 104-win A's - the 94-win Dodgers had home field advantage twice because the advantage alternated each year, and 1988 happened to be a year for both for the Dodgers - in another series that saw the Dodgers as underdogs.

What made the matchup even more disadvantageous for the Dodgers was the status of Gibson, who was dealing not only with a left hamstring strain but a sprained medial collateral ligament in his right knee. From Ross Newhan in the Los Angeles Times before Game 1:

"I can play with the hamstring, but as of today I can't play with this (right knee)," he said. "I don't know what my status is. I couldn't hit today and I couldn't have played today. All I can do is test it in batting practice tomorrow.

"If I can swing, I think I can play the outfield. I wish the Series was opening in Oakland so we could use a designated hitter."

Gibson was unable to start Game 1, but his replacement in left field was ready for the task. Mickey Hatcher, hitting second, hit a two-run home run off Dave Stewart in the first inning to give the Dodgers a quick 2-0 lead. Hatcher had one home run during the regular season.

Rookie Tim Belcher, who won twice during the NLCS, was shaky in Game 1. He escaped a bases-loaded jam in the first inning, but needed 28 pitches to do so. The A's loaded the bases again in the second inning, when NBC showed this graphic: 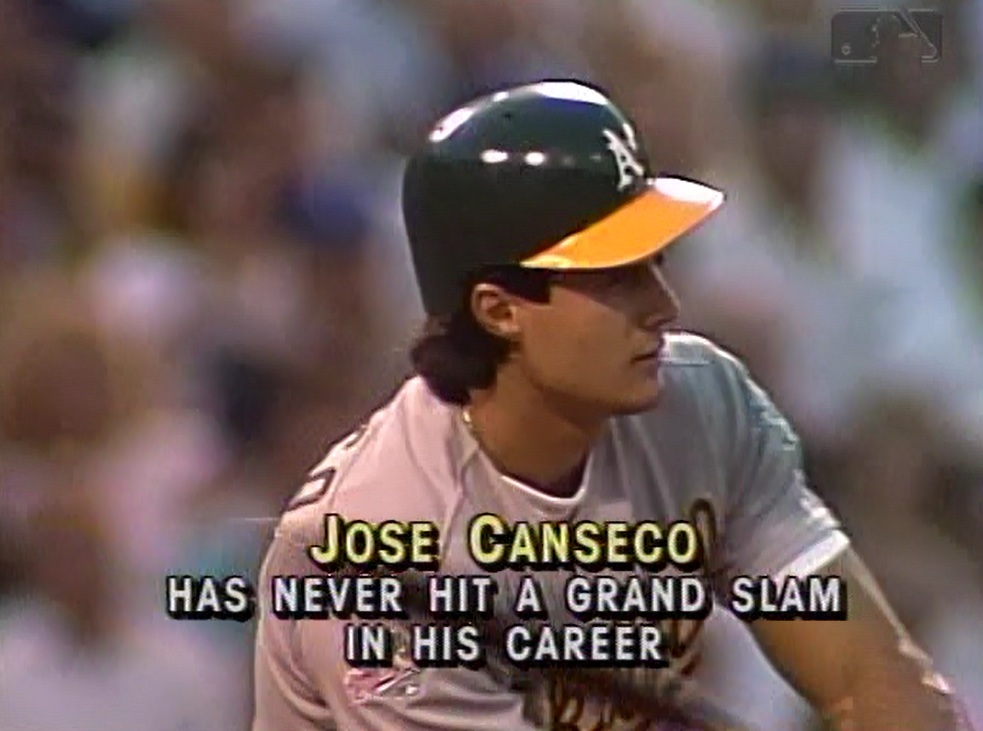 Jose Canseco quickly unloaded the bases, rocketing a home run to center field that dented the camera just beyond the wall for a 4-2 Oakland lead. Canseco was at the peak of his powers in 1988, hitting .307/.391/.569 en route to winning the American League MVP, and with 42 home runs and 40 stolen bases was the first 40-40 man in baseball history.

Belcher's night was done after just two innings, and a whopping 71 pitches. But the Dodgers would get a great boost from the bullpen. Tim Leary, who won 17 games that season for the Dodgers, pitched three scoreless innings in relief of Belcher, then Brian Holton chipped in with two more scoreless frames, as did Alejandro Pena after that.

But there was still the matter of scoring against Dave Stewart, a 21-game winner who finished fourth in the Cy Young voting in 1988, the second of his four straight 20-win seasons. The former Dodger allowed only two walks and a single after Hatcher's home run through the fifth inning.

But the Dodgers were able to scratch across another run in the sixth inning. After consecutive hits by Mike Marshall and John Shelby, Mike Scioscia delivered a third straight single to score Marshall, who looked like he was churning his legs in quicksand as he rounded third base.

On the NBC broadcast, the cameras panned the Dodgers dugout throughout the game, looking for Gibson. In the third inning, he was there in a warmup jacket. 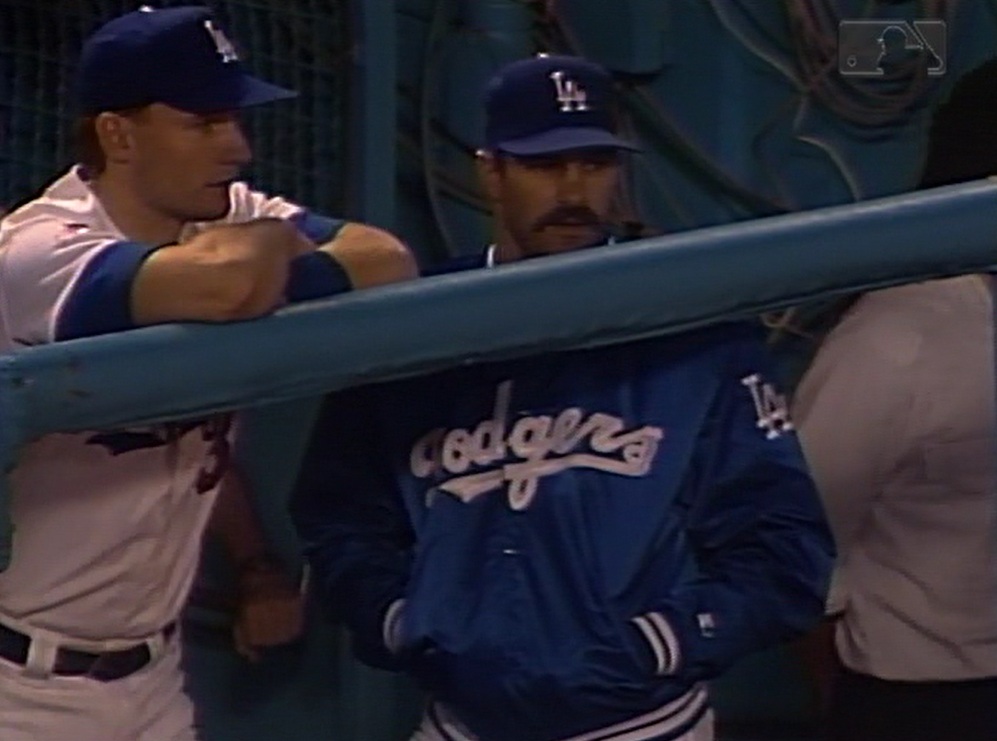 In the top of the ninth, Gibson wasn't there. He was busy hitting in the Dodgers' batting cage, with then-batboy and now clubhouse manager Mitch Poole continually placing baseballs on a tee. Gibson could hear the broadcast and Vin Scully, per Sam McManis in the LA Times:

Stewart led the AL with 14 complete games in 1988, but after eight innings he gave way to Dennis Eckersley, the former starter turned best closer in the game.

In his first full season as closer, the 33-year-old Eckersley saved 45 games, put up a 2.35 ERA, and struck out 70 while issuing only nine unintentional walks.

But after getting Mike Scioscia to pop out and striking out Jeff Hamilton on three pitches, Eckersley issued a walk to Mike Davis, the free agent bust who hit just .196/.260/.270 with two home runs for the Dodgers in 1988 but who hit 22 home runs one year earlier as Eckersley's teammate in Oakland.

NBC showed another prophetic graphic during the ninth inning. 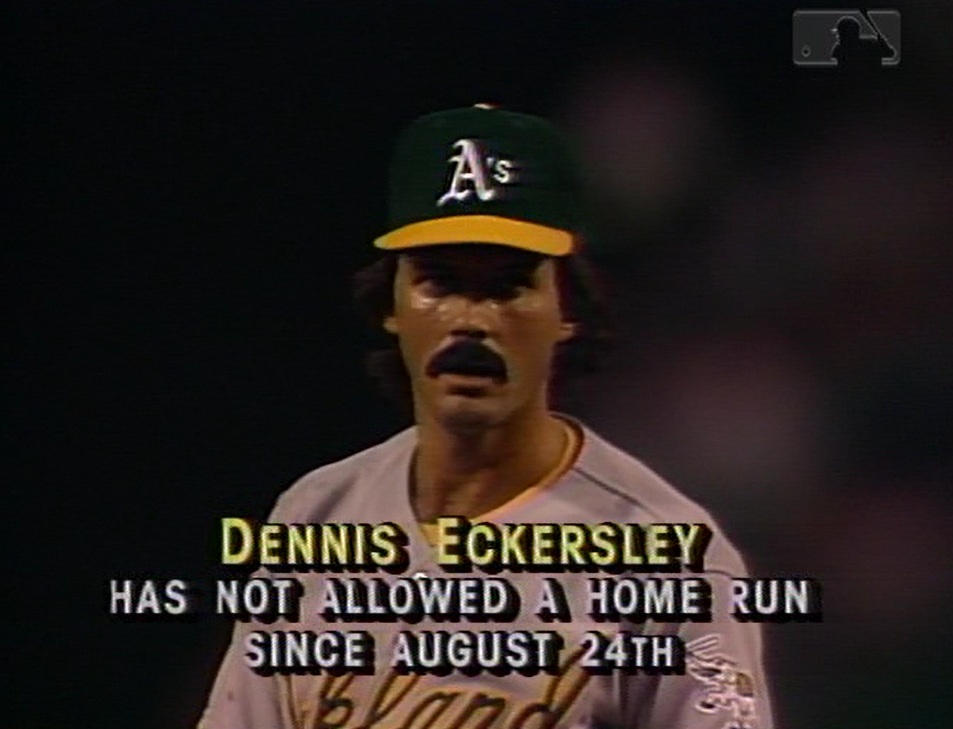 That brought one of the loudest roars ever at Dodger Stadium, with Gibson hobbling to the plate.

"And look who's coming up," Scully told the NBC viewers.

Gibson quickly fell behind 0-2 in the count to Eckersley and looked overmatched at the plate, which was understandable given his physical condition. When Davis stole second base all Gibson was thinking was to hit a game-tying single. Until the count went full, that is.

Gibson has many times credited Dodgers scout Mel Diddier for telling him that Eckersley would try a backdoor slider on a full count, and usually the quote begins with "Partner, sure as I'm standing here breathing ..."

After six straight fastballs, Gibson got that backdoor slider. The result was magical.

After over a minute of silence, letting the crowd tell the story, Scully added, "In a year that has been so improbable, the impossible has happened."

Don Drysdale, calling the game for the Dodgers on radio, had a great call as well (thanks to Josh Suchon for the audio).

"This crowd will not stop," Drysdale said. "They cannot believe the ending."

Suchon in his great book 'Miracle Men' talked to Poole:

Mitch Poole now believes in the power of visualizing something.

"When he got a hold of that ball, I swear to you, I saw the same path of what I saw earlier, Poole said. "It hit the exact same place in the stands. To this day, If I see it on TV, the same thing happens. My hair comes up on my arm. Let's put it this way, there aren't many times that I see that home run and my arms don't get those goose bumps. Very strange."

Eckersley was, as Scully put it during the broadcast, "shocked to his toes." 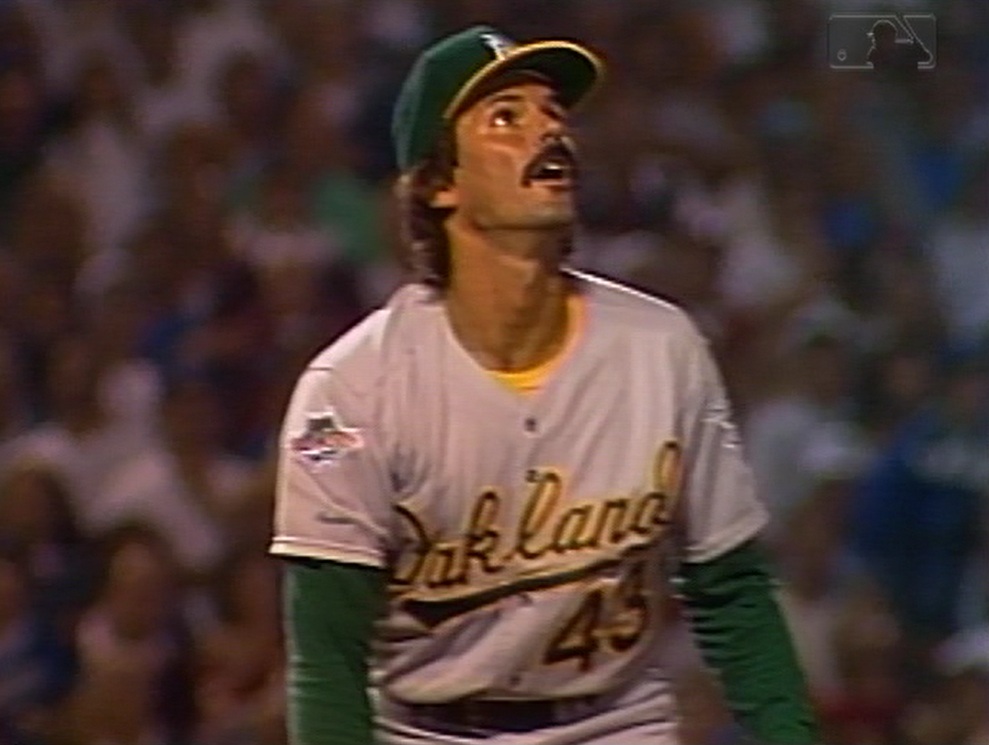