For the second time in three games, the 1988 World Series featured a walk-off home run. But in Game 3, this one didn't go the Dodgers' way.

The Dodgers took a 2-0 series lead into Oakland, but 25 years ago Friday saw Mark McGwire hit a home run to pull the heavily-favored Athletics back into the 1988 World Series. McGwire's walk-off blast ended a night that featured a series of former teammates playing against one another.

Old friend Bob Welch pitched 10 years for the Dodgers but was dealt as part of the three-way trade that netted Los Angeles pitchers Jay Howell and Jesse Orosco, and starting shortstop Alfredo Griffin before the 1988 season. He started Game 3 for Oakland, and was the topic of pregame discussion by Vin Scully and Joe Garagiola on the NBC television broadcast just before the top of the first inning.

"What he's doing now is what he's pretty much known for, and that's digging around that mound," Garagiola said. "Mike Boddicker said he digs a hole big enough to plant a tiger in it."

Scully understandably was quite familiar with Welch, having called his games for a decade.

"I have looked at him for 10 years. He appeared in 292 games for the Dodgers, and he is an excellent pitcher. Never mind that he just won 17 games, he is outstanding," Scully said. "However, the Dodgers are going to try and play a little mind game with him, because he is inclined to be hyper. In fact, with Bob Welch on the mound and Steve Sax at the plate, that's the closest thing to perpetual motion we'll ever see."

Whatever the Dodgers were doing, it didn't work much as Welch held them scoreless through four innings. The Dodgers were able to put a run on the board in the fifth, when Jeff Hamilton singled and Franklin Stubbs crushed a double into the right center field gap.

But the Dodgers were able to chase Welch after those five innings thanks to 95 pitches and nine runners on base.

The double by Stubbs tied the score at 1-1. Oakland scratched a run across in the third, which snapped a string of 18 straight innings without a run for the A's. That run came against reliever Tim Leary, who for the second time in three games rescued the Dodgers with a long stint out of the bullpen.

John Tudor started for the Dodgers, but lasted just four batters before leaving with elbow soreness that would ultimately require Tommy John surgery in the offseason.

"The mound is no place for heroes," Garagiola said on the NBC broadcast. "If you're hurting, you've got to get out of there before you get your ball club in trouble."

Leary, who won 17 games and pitched 228⅔ innings during the regular season, allowed just the one run in 3⅔ innings in Game 3, three days after three scoreless innings in relief in Game 1.

The score stayed at 1-1 until the ninth, when Jay Howell made his first appearance in 10 days, since getting suspended for having pine tar in his glove in Game 3 of the NLCS. Josh Suchon in his book 'Miracle Men' described the rude home coming for Howell, who pitched for the A's from 1985-87:

"Howell was back in Oakland, where the home fans had booed him at the 1987 All-Star Game, and they booed him worse afterward," Suchon wrote. "The A's fans were never so excited to see Howell enter a game. They chanted 'pine tar, pine tar, pine tar' at him."

Leading off the ninth inning was Jose Canseco, the American League MVP who hit a rocket grand slam to center field in Game 1. But a first-pitch pop fly to Sax at second base gave Howell a quick out, and dropped Canseco to 1-for-12 in the series, and 0-for-11 after the slam.

Canseco made an out so quickly, NBC had to wait to show this graphic, which appeared before McGwire stepped to the plate: 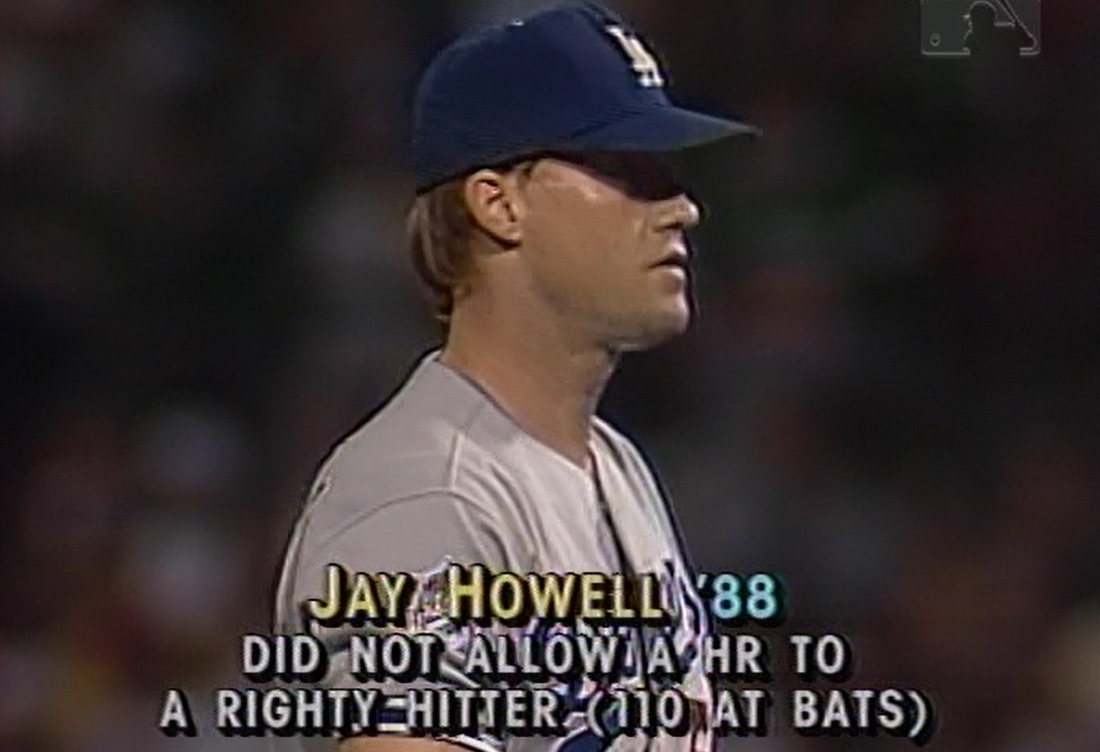 Howell only allowed one home run to a left-handed batter in 1988, as he had a solid regular season overall. He held right-handed batters to hitting .209/.281/.255 and no home runs in 122 plate appearances. But an eight-pitch at-bat by McGwire nullified that stat, with a line drive homer to left center for a 2-1 A's victory.

"High drive up the alley in left center field, and this one is going to be gone. Home run, McGwire," Scully called on NBC. "What a story, the former Dodger Rick Honeycutt wins for Oakland. The former Oakland A loses for the Dodgers, and the kid from southern California breathes life into northern California."

Honeycutt, who pitched for the Dodgers from 1983-87 and was involved in two separate Dodgers trades involving Game 1 starters Dave Stewart (1983) and Tim Belcher (1987), retired all six batters he faced including three strikeouts for the win.

The Dodgers now led the World Series two games to one.