After two miserable seasons, the Dodgers third baseman has blossomed from everyone's favorite player in the clubhouse to a productive and integral part of the team's winning formula, culminating in Monday's heroics at Dodger Stadium.

Share All sharing options for: Juan Uribe, the favorite teammate

LOS ANGELES -- The comeback story of Juan Uribe was already amazing, after the third baseman had an outstanding regular season both at the plate and in the field. But on Monday night Uribe's redemption took a turn toward the sublime with his NLDS-winning two-run home run in the eighth inning off David Carpenter of the Braves.

Carpenter had allowed right-handed batters to hit just .183/.239/.268 with three home runs in 157 plate appearances during the regular season. But as tough a situation as that was, the Braves' all-world closer Craig Kimbrel was warming up in the bullpen.

"Our backs were up against it. We knew we needed to get something done because they had Craig Kimbrel getting ready," said catcher A.J. Ellis. "When he comes in the game it's basically like our closer, the game's over."

But with a leadoff double against Carpenter by Yasiel Puig, the Dodgers didn't so much need a home run from Uribe as they did a base hit to score the tying run. The only problem was, Uribe wasn't given that chance, as manager Don Mattingly called for a sacrifice bunt with nobody out and the tying run already in scoring position.

Uribe failed twice to get the bunt down, then crushed a hanging breaking ball into the left field bullpen to give the Dodgers the lead and send Dodger Stadium into a frenzy.

"I'm so happy he didn't get the bunt down," said Ellis. "I've never heard a louder stadium in my entire life. Just a great, great feeling."

"They say you're not supposed to bunt," said Mattingly with a sheepish grin. "Eric tells me don't bunt, but it worked out today." 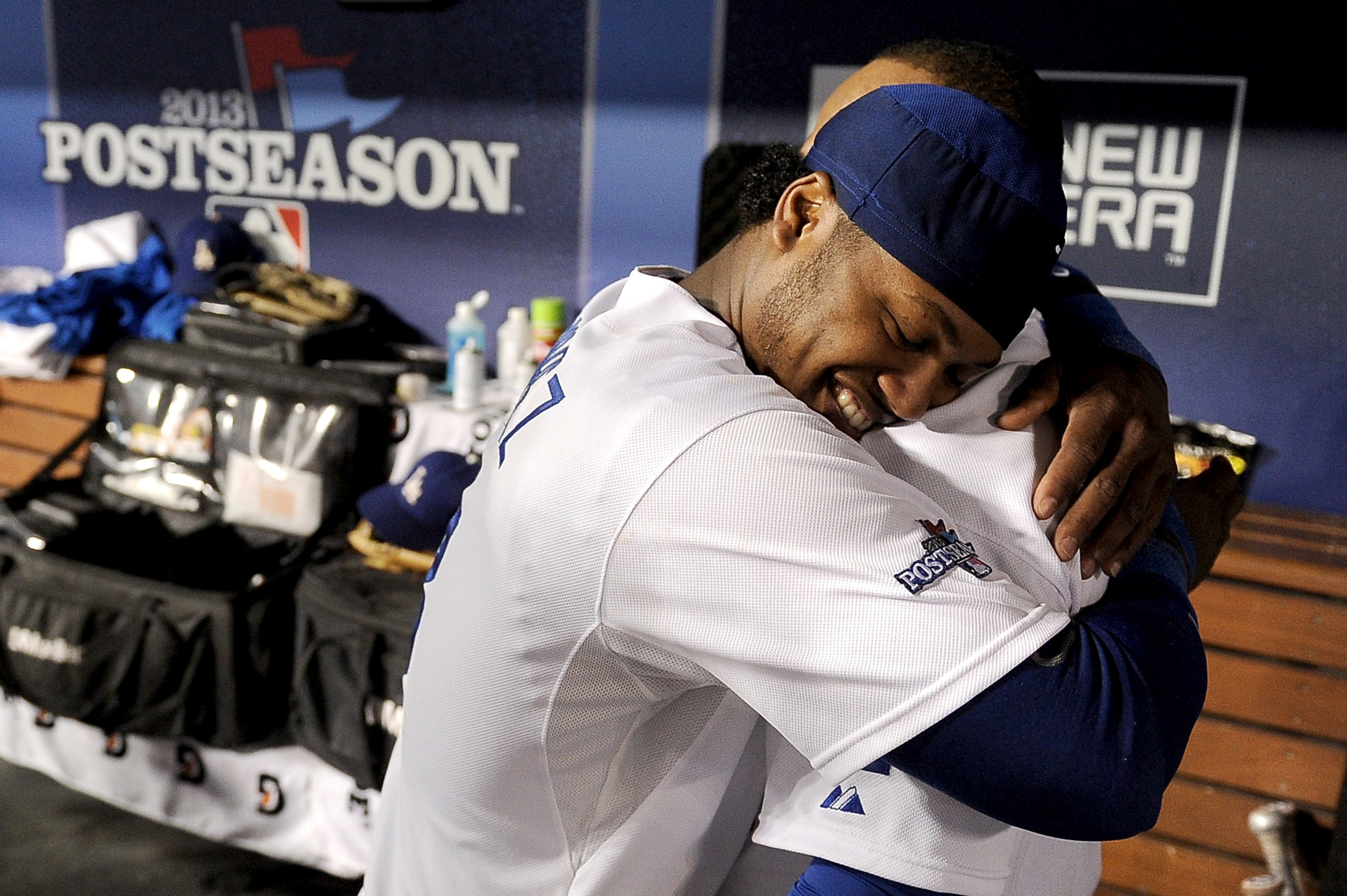 This photo of Uribe and Hanley Ramirez is too good not to share (Harry How / Getty Images).

What a difference a year makes for Uribe, who a year ago was riding the bench. He hit .199/.262/.289 in the first two seasons combined of his three-year, $21 million contract signed before 2011. But after losing his job to Luis Cruz in the second half of 2012, Uribe wasn't even an option off the bench. He started once in the final 66 games of the season an had just one plate appearance over the last 24 games.

But he never complained, and in fact embraced and mentored Cruz at third base.

"He's been great. Last year at the end of the year was unbelievable. I've said it so many times. He gained so much respect in our clubhouse at the end of our season last year the way he treated Luis Cruz. To me that was huge. We talked about it in the last meeting we had, how good of a teammate Juan was," Mattingly said. "It's just good to see him have this kind of a year."

For over a year I had a farewell Uribe post partially pre-written saved as a draft ready to go upon his eventual release. But that never happened, and the Dodgers are reaping the benefits now.

"Regardless what Juan did the past two years, Juan has been, I think consensus, he's probably been the most liked teammate we have," said Clayton Kershaw. "He's an incredible guy. He's always the same no matter what. You couldn't tell of he's 1-for-30 or 30-for-30. The way he plays, I just couldn't be happier for him. I love him to death."

"If you ask everyone in this clubhouse who is their favorite teammate, 95 percent will tell you Juan Uribe," said Ellis.

Uribe, who won World Series titles with the White Sox in 2005 (with Monday night Atlanta starter Freddy Garcia winning the final game!) and with San Francisco in 2010, called Monday's home run the best moment of his career.