25 years ago today was arguably the best non-World Series postseason game in Dodgers history. Usual suspects Orel Hershiser and Kirk Gibson were big in the 12th inning, but catcher Mike Scioscia was the hero in the ninth.

The 1988 Dodgers will always be remembered with Orel Hershiser on the mound but after the Game 3 loss, the Dodgers faced the realization that if they were to go the World Series, they would have to win at least two of the next three games without the benefit of Hershiser starting for them.

Trailing 2-1 in New York would be daunting enough against any team's best starter but the Dodgers were facing as good a pitcher they had ever faced in this situation.  Dwight Gooden debuted as a 19-year old wunderkind in 1984 and he had dominated the Dodgers like no other pitcher in history.  Gooden had made 13 career starts including Game 1 against the Dodgers, Gooden was 9-1 (the Mets were 12-1) with a 1.31 ERA, 0.81 WHIP and 9.54 strikeouts per nine innings up to that point in his career.

For the Dodgers, John Tudor was making his Dodger NLCS debut.  Tudor had already pitched in two League Championship Series, and this would be his fifth career start in an LCS (he had a 2.25 ERA in 28 innings).  Also, the Dodgers found out that after Jay Howell was ejected the day before for using pine tar, Howell would be suspended for three games, leaving the Dodgers a closer short going forward.

The game started off as well as any prior start against Gooden. In the top of the first, Steve Sax singled and stole second and Mickey Hatcher walked.  Kirk Gibson grounded out moving the runners to second and third.  And then with two outs, John Shelby singled, scoring Sax and Hatcher for a 2-0 lead.

That score held until the bottom of the fourth, Keith Hernandez singled and then before you could say John Tudor, Darryl Strawberry hit a two-run home run and Kevin McReynolds followed with a solo shot.  That gave the Mets a 3-2 lead.

In the bottom of the sixth, a McReynolds double followed by a Gary Carter triple made it 4-2.  Brian Holton replaced Tudor and got the next 3 batters out without allowing a run. 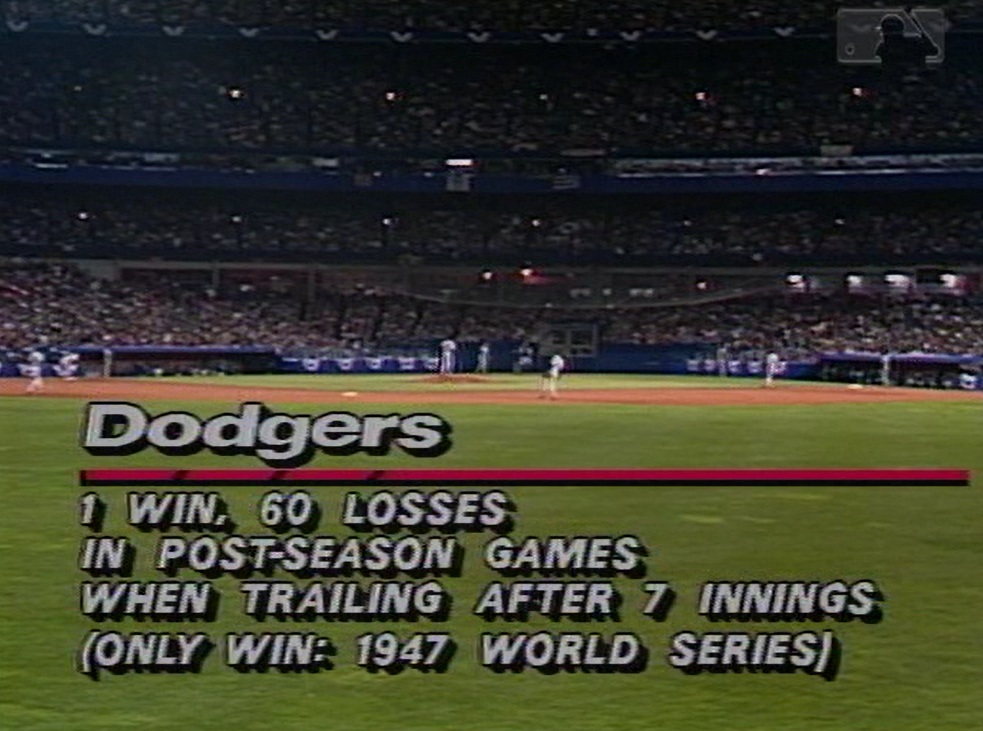 This graphic ran on ABC in the top of the eighth inning.

Gooden retired six out of the seven batters he faced in the seventh and eighth innings so after Ricky Horton pitched his second 1-2-3 inning, the Dodgers came up to face Gooden in the top of the ninth trailing by two runs.

Shelby led off the inning.  He had singled twice in the game and he worked a walk.

On the ABC broadcast, analyst Tim McCarver said,"That could be a very, very big walk."

Mike Scioscia was up next and he hit the first pitch to most unlikely of places, over the wall. Al Michaels called the home run on ABC:

"Scioscia at the plate, Hernandez playing back of the runner at first, and that's ripped to right field and deep. Stawberry goes back, she's gone. Mike Scioscia, with 35 home runs in 8½ years in the major leagues. And we talked about him throughout the series, big and strong but really a contact hitter, a man who doesn't strike out a lot and who doesn't very many home runs, averaging about four per season, hits the biggest home run of his career."

Sam McManis of the LA Times not only wrote about that moment, he slighted a potential HOF in the process:

Scioscia had averaged less than 1 home run a month during the regular season. His last came Sept. 13 against Atlanta Braves pitcher John Smoltz. Gooden, however, is not some Smoltz just up from the minor leagues.

"I was hoping no one in the Mets' bullpen would catch the ball, because maybe they'd call me out or something," Scioscia said. "The guys in the dugout were kidding me about my home-run trot, but I told them I was running as fast as I could."

With the game tied 4-4, it became a battle of the bullpens, as the game went into extra innings as Sunday turned into Monday in New York.

The 10th and 11th innings would have moments but it wasn't until the 12th when this game became an all-time great. This was the time when Hershiser, who had pitched seven innings the day before, retreated to the locker room. Per the great 'Miracle Men' book by Josh Suchon, Hershiser (Orel IV) saw his dad in the clubhouse:

Orel III was in the visitor's clubhouse. He was so cold, he'd bought a Mets sweatshirt to stay warmer, which he concealed under his raincoat. When he saw his son entering the clubhouse, father asked the son, "What are you doing?"

Dad wasn't happy. His younger so, Gordie, a Dodgers minor leaguer, had already undergone two elbow operations. He would give the minor leagues one more year before retiring. Dad was always worried about the number of innings his sons were throwing.

"Someone is going to hit a homer, and I might have to pitch," Orel said.

Kirk Gibson was not having a great NLCS, as he came up in the 12th, he was just 1-for-16 with two walks in the first four games.  Roger McDowell was pitching and Gibson hit the second pitch he saw over the wall in the right center to make it 5-4 Dodgers.

Tim Leary started the bottom of the 12th and three batters later, it was first and second with one out. Jesse Orosco came in and walked Hernandez to load the bases.  After throwing ball one to Strawberry, Lasorda came out to the mound and reportedly said:

Get the bleepin` ball over the plate or you`re a goner! 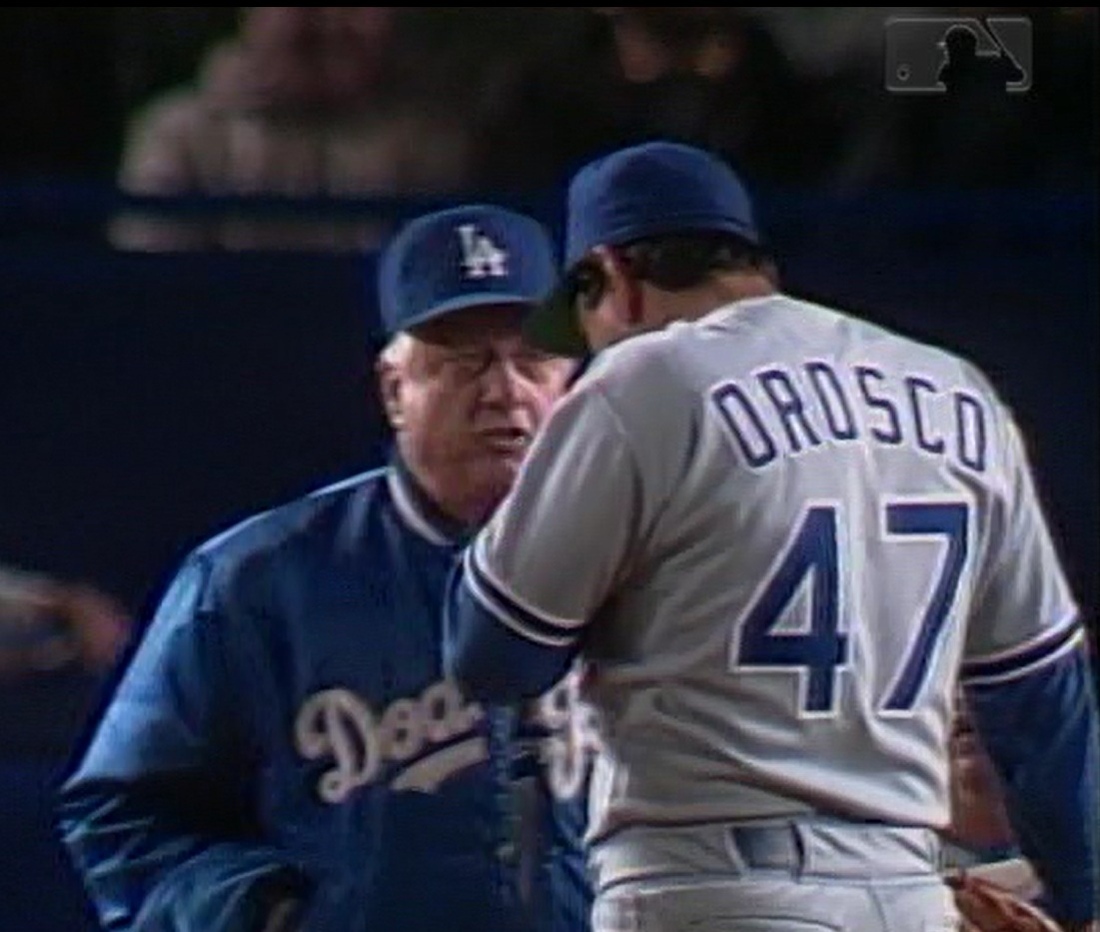 Lasorda lays into Orosco on the mound.

Strawberry popped up the next pitch to second and as the umpire signaled out due to the infield fly rule, all eyes looked toward the bullpen where a familiar figured emerged to replace Orosco.

Hershiser wasn't supposed to be anywhere near the bullpen, but no one could keep him away so he came in to face McReynolds.

There are moments frozen in time when you look back at a game like this and the frozen moment from this game is the image of Hershiser thrusting his fist in the air as he saw Shelby catch McReynolds humpbacked liner to end the game.

This series was now tied 2-2 and the Dodgers and Mets would be back later that day to play a matinee Game 5.