Jarret Martin is living the dream

The hard-throwing lefty was added to the Dodgers' 40-man roster on Nov. 20, and will take part in his first big league spring training in February.

Share All sharing options for: Jarret Martin is living the dream

LOS ANGELES -- Dodgers minor league pitcher Jarret Martin was in the front yard of his family's house in Bakersfield on Nov. 20, checking his phone. That was the deadline for MLB teams to add players to the 40-man roster to protect them from the Rule 5 draft.

"I definitely had my phone close to me at all times hoping for the best, and I constantly had my eye on twitter to see if the Dodgers roster had been posted yet. When I got a call from a private number I answered the call to [Dodgers general manager] Ned Colletti on the other end of the line, and he informed me that they were adding me to the club," Martin said. "That conversation was definitely in my top 5 conversations I’ve ever had. We were all very excited."

The now-24-year-old left-handed pitcher was 6-7 with a 4.30 ERA between two levels in 2013, with 106 strikeouts and 62 walks in 96⅓ innings. He had a 1.69 ERA in 11 relief appearances with Double-A Chattanooga, where he was reunited with pitching coach Hector Berrios, his pitching coach in 2012 in Class-A Great Lakes.

"I have learned so much from the Dodger organization. I believe that every coach in the system has a vested interest in my success," Martin said. "I was able to work with Hector for two seasons and he is full of information. I relate a lot to Hector being left handed and pitching in the minor leagues."

"[He] has been a mentor that I look up to.  He pitched in the major leagues and definitely his outlook on baseball, and in life, is similar to my own. His love for Christ, his family and baseball is inspiring," Martin said. "Not only did he help me a lot during the season but also he even made the effort to come to the Arizona Fall League to watch my games."

Martin pitched for the Glendale Desert Dogs in the Arizona Fall League, and tied for the team lead with 13 appearances. He had a 5.40 ERA and 15 strikeouts in 15 innings, but like with the Lookouts (12 walks and 11 strikeouts) Martin had more walks, with 16. Still, he greatly enjoyed the experience.

"The Arizona Fall league was awesome. It was an honor to be considered qualified to play amongst the top prospects in the game and to be able to represent the Dodgers.  I had a great group of guys on my team and our coaching staff for the Desert Dogs was nothing but helpful for our team and myself," Martin said. "Something that was also really cool was being able to get a taste of what a big league life is like with the uniforms, facilities and of course the food. Everything about the league was great."

That taste of big league life will extend to February, when Martin will take part in his first big league camp in spring training now that he's on the 40-man roster. But Martin is getting ready this offseason the same as any other.

"Preparing for my first big league spring training does not affect my offseason program at all.  I have always worked hard in the offseason in order to prepare for another season," he said. "I will, on the other hand, have to begin a throwing program a few weeks earlier this year being that major league camp starts a few weeks prior to minor league camp.  I am blessed and honored to be going to my first big league spring training." 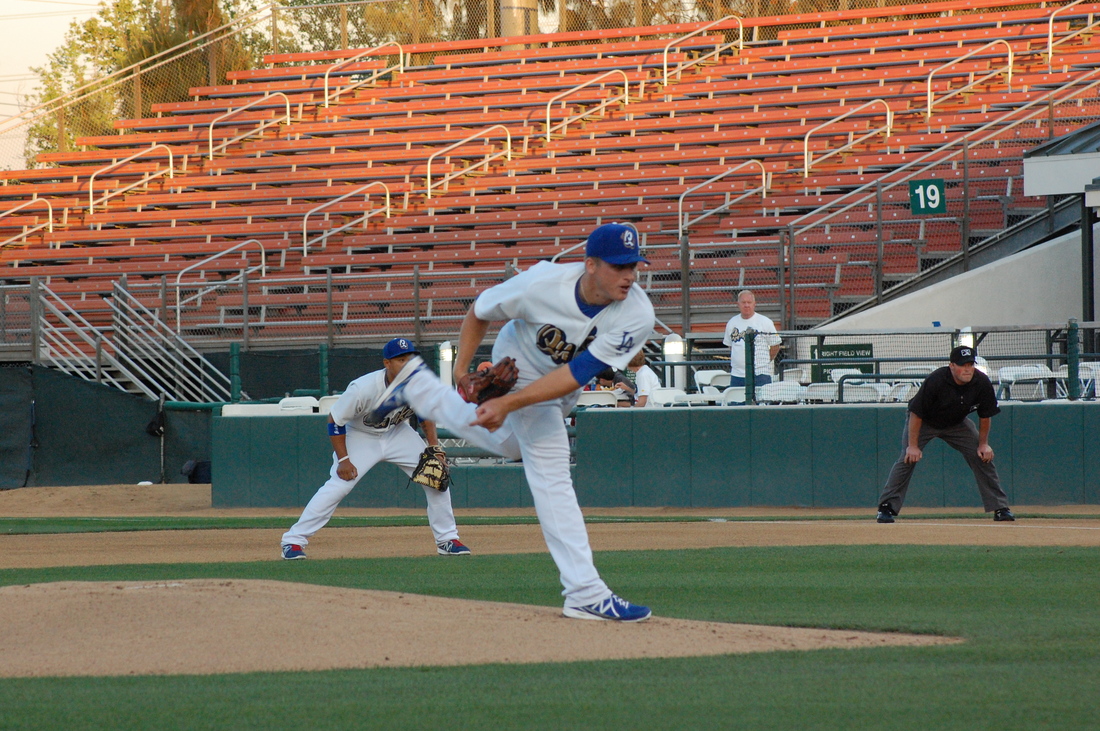 What makes this — and really the last two seasons — extra special for Martin is that he grew up in Bakersfield a Dodgers fan. He still lives there today, and with his fiancee Allie bought their first house this offseason.

"Bakersfield has always been a Dodger loving town, and since I was very young I’ve always had a passion for the Dodgers. My favorite player growing up and still to this day was the greatest hitting catcher of all time, Mike Piazza," Martin said. "Sam Lynn Ballpark is a historical site in Bakersfield and I have tons of great memories there from watching the games as a kid, then being able to play high school tournaments on the "pro" field to recently this season being able to come back home as a professional and pitch against my hometown team.

"When I was traded from the Orioles to the Dodgers in 2011, I was ecstatic.  I am so grateful for the Orioles organization for the opportunity to start in professional baseball to fulfill my life long dream to become a major league baseball player but getting the news that you will now be employed and playing for your childhood team is such an unbelievable feeling that I can’t even express it to you in this email. Very blessed."

The Dodgers acquired Martin in December 2011 along with outfielder Tyler Henson (now in the Phillies' system) for starting pitcher Dana Eveland. Almost immediately, the Dodgers made some tweaks to Martin's delivery.

Getting the news that you will now be employed and playing for your childhood team is such an unbelievable feeling that I can’t even express. -Jarret Martin

"My first experience in a Dodger uniform was at our Young Guns pitching camp in mid January [2012], and pretty much from the get go I had hands on coaching from several different coaches that broke me down to square one. I came in with a delivery that was very inconsistent and caused my arm to be very late with zero leg drive to go with it.  I studied film on several different delivery types and took tons of mental notes to use in my dry work sessions back home in Bakersfield to get ready for spring," he said. "One night everything came together and I began to feel what my body should be doing instead of what I had been doing. Since that day, my command has continued to get better and my pitches have been affected drastically. My fastball use to top at the 93-94 mph mark and now I’m topping at the 96-97 mph mark. That was the biggest jump for me from one off season of work."

He also made another switch in 2013, from starting to relief in June. He went from a 4.73 ERA in the California League in 14 starts to a 2.73 ERA in 26 relief appearances between Rancho Cucamonga and Chattanooga. The walks were high — 19 in 26⅓ innings — but out of the bullpen he did hold batters to a .244 batting average and .322 slugging percentage.

"My approach did change when I moved from a starter to a reliever.  I have had to change my mental preparation prior to my outing.  At first, it was uncomfortable trying to find the right warm up and get my timing right.  After a few outings, I began to thrive," Martin said. "I found the importance of pounding the zone and really concentrating on getting three guys out."

Martin is no stranger to many of his new teammates, as 11 Dodgers had minor league rehab assignments in Rancho Cucamonga during his four months in Class-A in 2013. The longstanding tradition of major leaguers paying for relatively lavish postgame meals — dinners from a local steakhouse rather than, say, peanut butter and jelly sandwiches — during their stay on the farm was not lost on Martin. He wouldn't spill the beans on who provided the best postgame spread, only offering with a smile, "Nobody disappointed us minor leaguers."

But one of those 11 Dodgers stood out to Martin, and is one he will be working directly with at Camelback Ranch in Arizona in a few months.

"Out of all the Major league rehab guys that I got to meet, the one that made a really good impression on me was AJ Ellis. His leadership on the field was definitely noticeable and even though he struggled getting his swing back while he was with us, you wouldn’t have noticed any affect on his catching ability," Martin said. "The man knows his craft and I was lucky enough to work with him in a bullpen session. I look forward to throwing with him this spring."

"I am very honored to be a part of the Dodgers 40-man roster and I realize that it is a very elite group to be a part of a major league club. With that said, I do believe that if I go out and pitch to the best of my ability by continuing to throw strikes and get hitters out I will be suited up with the Dodgers in Los Angeles at some point in 2014," Martin said. "Being on the 40 man does not guarantee an automatic big league call up, so I will continue to work on my craft and put in the time to earn a spot on the 25 man roster."