The soon-to-be 38-year-old third baseman reportedly wants to continue playing, with the Reds and Dodgers both interested in his services.

If the Dodgers are in fact going to bring Scott Rolen into the fold, it appears they will need to first wait to see what happens with the Reds. The one thing we know is that Rolen has in fact decided he would rather play in 2013 than retire, as indicated by reports from both John Fay of the Cincinnati Enquirer and Mark Sheldon of MLB.com.

"We don’t know for sure. It’s still up in the air," Reds general manager Walt Jocketty told Sheldon. "I hope to get it resolved this weekend. I’ve been busy this week dealing with the arbitration guys." 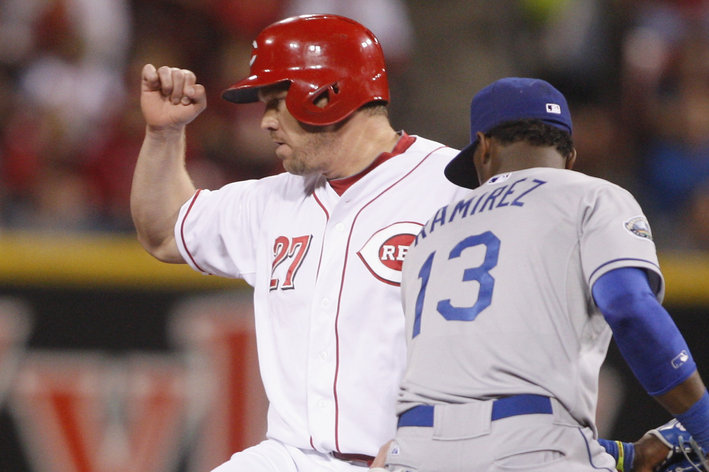 A look back in mid-January, when rumors of the Dodgers' interest in Rolen first surfaced.

It's understandable that Rolen, who turns 38 in April, would want to return to the team with which he has spent the last 3½ seasons and won a pair of division titles. But as Fay noted, the Reds have already committed to Todd Frazier as the regular third baseman. Frasier, 27 in two weeks, hit .273/.331/.498 with 19 home runs in 128 games last year and finished third in National League Rookie of the Year balloting. The Reds also acquired Jack Hannahan, who figures to backup the hot corner as well.

Not that Rolen would make anywhere near that much in 2013, especially with a reduced role. In fact, it's a role that the Reds have yet to decide.

"It’s a role we’ll have to determine for him during Spring Training," Jocketty told Sheldon.

"I think there’s a chance we get something worked out," Jocketty told Fay. "We’re talking about the details — how much opportunity is there."

If there isn't much opportunity in Cincinnati, that's where the Dodgers would step in, looking for an alternative to or at the very least insurance for Luis Cruz at third base. Even the most ardent Cruz supporter should recognize the risk of heading into the season with little options outside a 29-year-old career minor leaguer with three hot months to his resume.

It's important to remember that it's highly unlikely the Dodgers would expect a 38-year old, especially one who has battled shoulder problems the last two seasons, to play every day. There would still be plenty of playing time opportunity for Cruz, who hit .297/.322/.431 with 20 doubles, six home runs, and 40 RBI in 78 games in 2012, seemingly out of nowhere.

Now, if Rolen can hit like he did after he came back from shoulder surgery, when he hit .277/.354/.441 with 11 doubles and six home runs in his final 63 games in 2012, all the better. It should be noted that Rolen put up those numbers while sitting regularly, as he started only 59 of the final 97 games of the season.

It's at this point I should note that Rolen would likely take the roster space of Juan Uribe, who is due to make $7 million in 2013, the final year of his contract. But there have been so many opportunities for the demise of Uribe, who started just once in the final 66 games of the season and had just one plate appearance in the final 34 games of 2012, that I simply won't believe Uribe is gone until he is officially removed from the roster.

Dodgers manager Don Mattingly, who like Rolen is from Evansville, Ind., told reporters on Saturday at fan fest that he reached out to the third baseman. With spring training rapidly approaching - Dodgers position players report to Camelback Ranch on Feb. 15 - we'll likely soon find out whether Rolen's desire to keep playing extends beyond just Cincinnati.