It's been a little over a week, but the 2013 Topps baseball cards are here, with Series 1 released on Jan. 31. I bought a jumbo pack of cards, and got three Dodgers in the pack: Kenley Jansen, Clayton Kershaw, and Paco Rodriguez.

It's a pretty clean design, with a white border around the card, player name on the bottom left, and team logo on the bottom right. Here is Kershaw's card from the front... 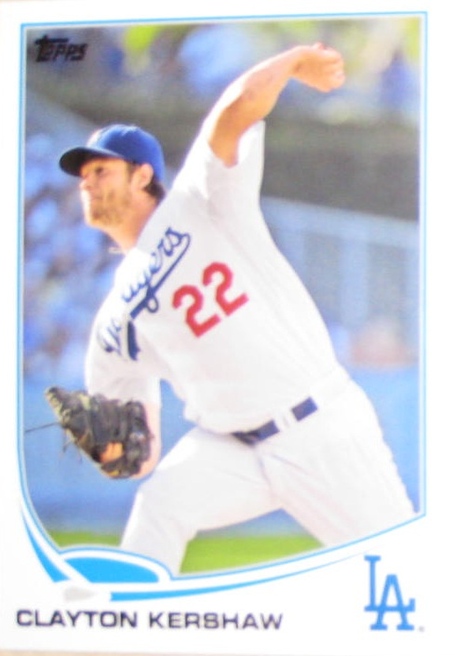 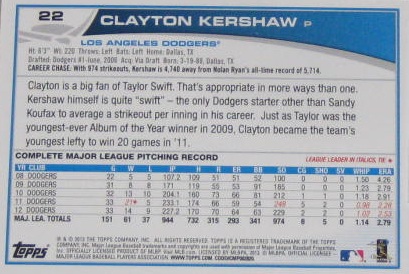 There a couple of cringe-worthy items here. It's not that Kershaw is a fan of Taylor Swift - that's not news - but rather the lengths Topps goes to to link his Swift fandom to his baseball career. To wit:

"Clayton is a big fan of Taylor Swift. That's appropriate in more ways than one. Kershaw himself is 'swift' - the only Dodgers starter other than Sandy Koufax to average a strikeout per inning in his career," the back of the card states. "Just as Taylor was the youngest-ever Album of the Year winner in 2009, Clayton became the team's youngest left to win 20 games in '11."

Ouch. On to Jansen, who like Kershaw had his picture taken at Dodger Stadium. 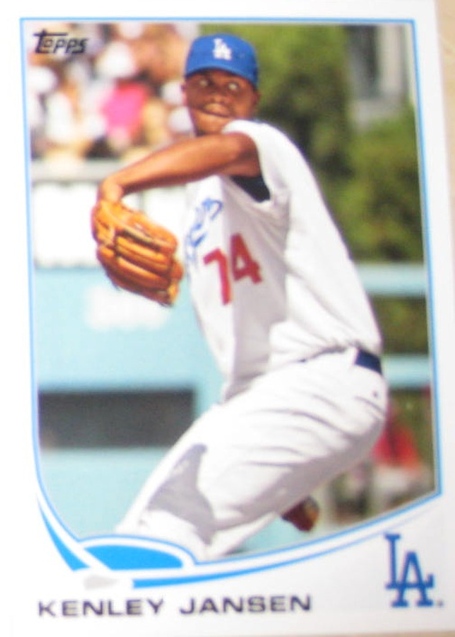 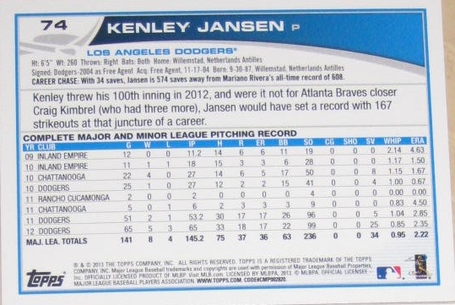 Jansen, like Kershaw, has his uniform number is his card number, something new for Topps that hasn't sat well with some. Like Cee Angi at SB Nation last week:

The 2013 cards look a little better, but Topps broke a tradition in the 2013 Set that will further alienate those, if anyone is still paying attention, who buy out of nostalgia: They abandoned the traditional numbering system. To take a step back for a moment, in the pre-monopoly period, each card company had their own system for numbering. These were used in part to distinguish key cards in the set. Fleer organized by team. Donruss had Diamond Kings and Rated Rookies. Topps had their super-secret Illuminati-hierarchy formula, in which they assigned a number to each card that in many cases reflected their estimation of the player's worth.

This season, Topps is using a numbering system that's dramatically different than any other season's scheme. Card #1 belongs to Bryce Harper, and there is no card #7. The "00" cards belong to Scott Downs, Mike Moustakas, and Daniel Murphy, clearly a departure from long-standing tradition. As for the rest of the cards, there is nothing secret about how Topps arranged them: The majority are ordered by jersey number, so Ryan Braun is card #8, Dustin Pedroia is #15, Joey Votto is #19, and so on. For numbers that duplicate, as most of them do, Topps has ranked them by performance, so Clayton Kershaw is #22, Andrew McCutchen is #122, and Jason Heyward is #222. But even this breaks down, as Alex Gonzalez, a non-star who spent most of the year on the disabled list and wore #11, is #322.

The traditional hierarchy may seem inconsequential, but it provided a platform for organizing and trading cards for years. Because of it, I lost my Dave Winfield, a #5 in the 1992 set, to a neighborhood bully for a David Segui card, #477 in the same series. The bully didn't know much about baseball, he didn't even care about cards, but he knew that one with a lower number was more valuable. Joe Posnanski recently wrote about the Topps numbering system, finding he could assign fairly accurate values to some of the best players in the sets based on the numbering system. Most importantly, when, like most kids, I put them in binders, my dad would sort out all of the "00" cards of the set -- Cal Ripken, Jr., Jose Canseco, Don Mattingly, Lenny Dykstra, Vince Coleman, Paul Molitor, and Ruben Sierra -- and put them in a separate spot so they wouldn't get damaged. The problem with the lack of consistency isn't just that it rocks the boat of nostalgia, but it eliminates a common language that existed from year to year, even if no one fully understood the system.

On to Rodriguez. The front... 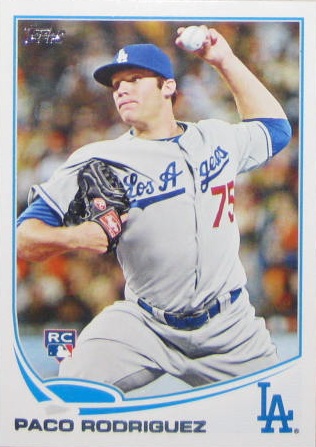 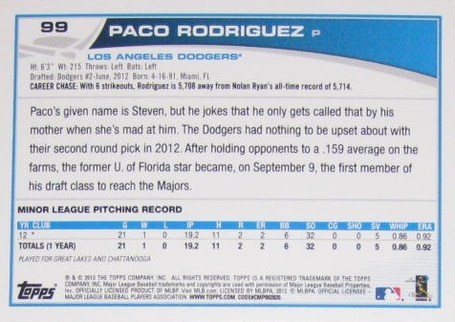 Topps has something called "Career Chase" on the back, tracking some sort of important historical milestone that each player could reach. It reached humorous levels with Rodriguez, as the card notes, "With 6 strikeouts, Rodriguez is 5,708 away from Nolan Ryan's all-time record of 5.714."

The first series has 330 cards, and here are the Dodgers in this part of the set: