The 25-year old catcher is competing with four non-roster invitees this spring for the Dodgers' backup catcher job behind A.J. Ellis.

Unlike the past few seasons, the Dodgers don't have their two major league catching positions set in stone before spring training began. A.J. Ellis will be the starter, but there is no veteran backup signed to a major league contract. Instead, there is a battle between Tim Federowicz, the only other catcher on the 40-man roster, and four non-roster invitees: Eliezer Alfonzo, Wilkin Castillo, Ramon Castro, and Jesus Flores.

While it would be premature to call Federowicz the favorite for the backup job, the fact that no major league backup was signed was at the very least a show of faith in the 25-year-old catcher.

"He's going to have a great chance," general manager Ned Colletti said Tuesday when asked if Federowicz is the favorite to win the backup catcher position. "He's worked hard at his game. When we acquired him from Boston a year and a half ago, we thought he would be a big league catcher. That's why we went and got him." 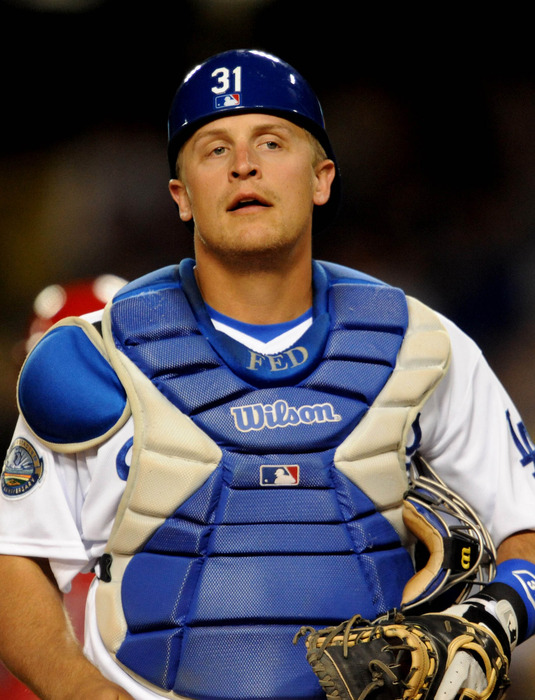 Federowicz hit .294/.371/.461 with 34 doubles and 11 home runs in 115 games with Triple-A Albuquerque, and was named both an All-Star and an all Pacific Coast League first teamer. Federowicz said his offensive approach has been simple.

"It's just consistency every day, being able to keep the same approach and stay in the right center gap instead of trying to pull and hit home runs," Federowicz said. "I had a leg kick to begin with when I first got called up, and I got rid of that. Last year I was finding what worked for me, and now that I've found it I'm excited for what I can do this season."

Colletti said any offense would be a bonus from Federowicz, who is considered major league ready defensively.

"He's very good defensively. He's coming along as an offensive player, but as he knows and we've continued to tell him, it's defense, game calling, keeping the running game in check, and getting the pitcher through a tough go," Colletti said. "He's getting better and better at it, but that takes experience, too."

Experience is what the other four catchers have, with Castro, Alfonzo, and Flores combining for over 19 years of major league service time. Alfonzo is the only one of the six catchers invited to big league camp not yet in Camelback Ranch, as he is dealing with a personal issue, and is expected in camp by the end of the week.

That lack of experience could lead to a catch-22 situation for Federowicz, like many others before him, in that he needs experience to gain more experience, but because of his lack of experience might not get the opportunity to earn more experience just yet. Federowicz got called up in September in 2012 but played in just three games, and started once, on the final day of the season after the Dodgers were eliminated. But he said that month with the major league team was beneficial, even as he was riding the pine.

"You can learn your routine before you start playing. That's the big thing. You don't want to get there and not know what you want to do each step of the way to prepare for the game," Federowicz said. "I basically had a month to prepare and figure out what I wanted to do before the game and figure out the timing. I watched A.J., and I watched Matt Treanor, to see what they did, and that made it a lot easier."

There is a balancing act between wanting Federowicz to continue to develop, and whether or not he would be able to do so starting once every five games or so. A.J. Ellis was fourth in the major leagues with 128 starts and 1,151 innings behind the plate in 2012.

Last year I was finding what worked for me, and now that I've found it I'm excited for what I can do this season.-Tim Federowicz

"It's always going to be a thought process. It's going to be part of it," Colletti said, "You don't want someone sitting for 10 days or two weeks, not that I think he'll sit for 10 days or two weeks. You have to measure keeping somebody sharp versus when they do get an opportunity they're not sharp because they didn't get a chance to play. It's part of the juggling act that every manager does."

Federowicz said he doesn't let his chance at a roster spot change his preparation this spring.

"Yeah, I have a realistic chance of making this team and last year I didn't. But I'm still preparing the same way. I'm preparing to catch 130 games, whatever happens," he said.

Will Federowicz be paying attention to his spring training stats as he battles for a spot on the opening day roster?

"No, not at all. It's more just getting ready for the season. That's when it really counts. For me I think it would be better if I had good stats this spring because I'm trying to make the team," he said, smiling. "But I wouldn't harp on it as far as how my season's going to go."