The left-hander, who was signed to a six-year, $36 million contract after the Dodgers bid $25.7 million for the rights to negotiate with him, threw his first bullpen session on Thursday at Camelback Ranch.

The story of the first three days of Dodgers camp at Camelback Ranch has been Hyun-jin Ryu. The soon-to-be 26-year-old pitcher has been followed and intensely covered by over 20 Korean reporters, and on Thursday the left-hander threw his first bullpen session of camp.

Ryu was one of 14 pitchers who threw on Thursday, but even $147 million man Zack Greinke was an afterthought as he threw alongside Greinke. 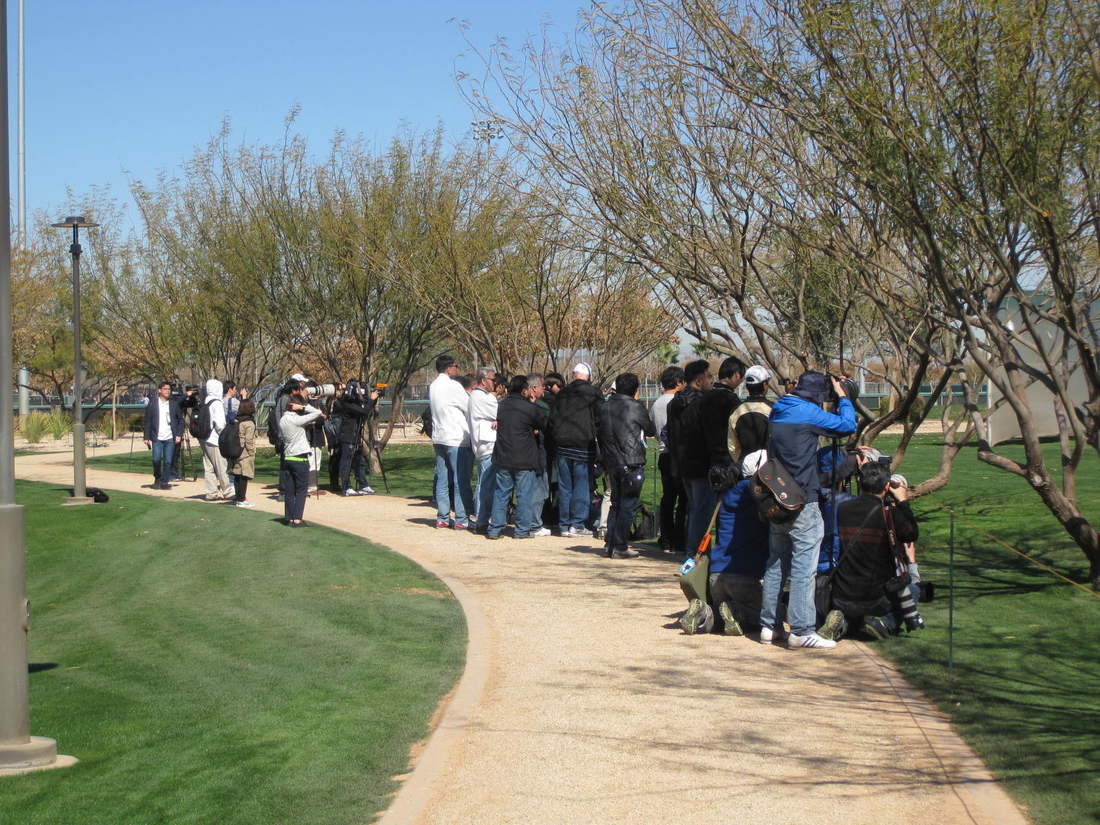 A throng of reporters wait for Ryu to pitch

"He threw the ball free and easy. I loved his command. The fastball location I thought was simple," said pitching coach Rick Honeycutt. "The changeup is a plus-plus pitch."

"I was pretty happy with my fastball," Ryu said. "My curve isn't there yet, but I was satisfied with by fastball and changeup."

Honeycutt was impressed seeing Ryu pitch in person for the first time, after only watching him on video. Not that the video wasn't impressive in its own right.

"I would have signed him myself just looking at the video. This guy has command of four pitches, and that's highly unusual for a young man," Honeycutt said. "Seeing him live, his size (stands out). He's a big man, and has good body control. ... To have command of four pitches, and have it come out nice and easy. He has the plus-plus changeup. I didn't see the breaking pitches, but I saw those on video and know he's been commanding those also."

Honeycutt had a hard time coming up with a comparable player for Ryu, but did mention three big left-handers as potential matches. 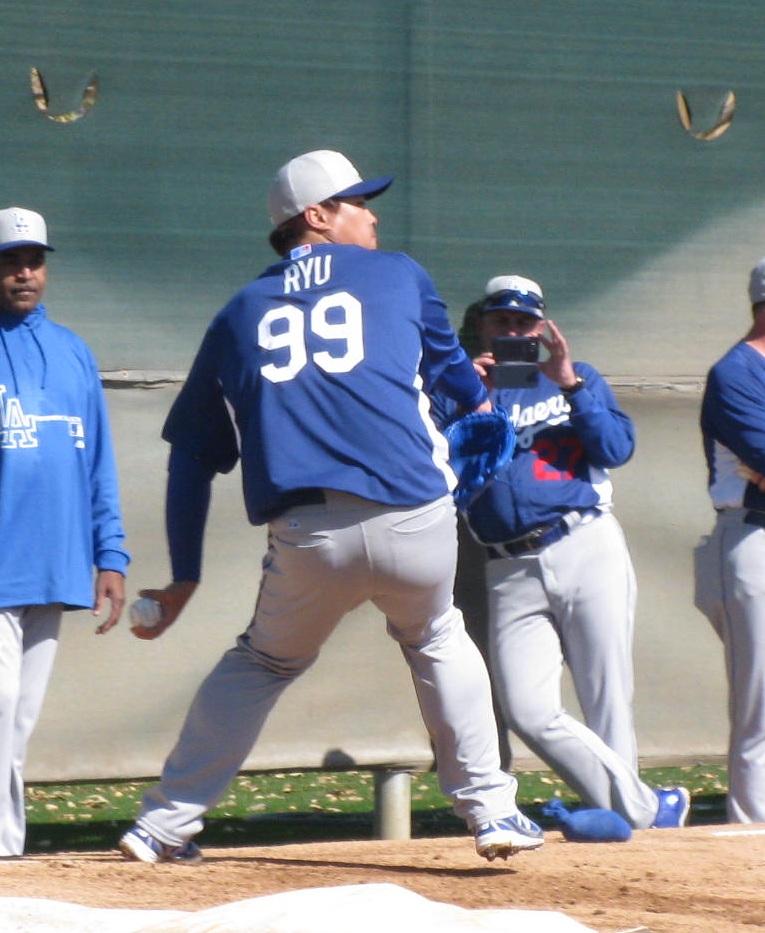 Another look at Hyun-jin Ryu's delivery

"Sid Fernandez was a big guy, but had a different delivery. Ryu is nice and free over the high three quarters, where Sid had a different ball that looked like he pushed it out of his chest," Honeycutt said. "I hope he resembles a Jerry Reuss while he's here. We were actually talking about Steve Carlton the other day, and I saw him on (MLB Network) last night. Those are two big left-handers that had good careers. Ryu could fashion himself after either one of those."

Ryu will throw another bullpen session Saturday, and will likely throw around 50 pitches.

"I didn't throw many breaking balls today, but hopefully I will throw more on Saturday," Ryu said.

Ryu has received a lot of attention in camp so far, but has also proven to be quite hilarious, or at least as part of a comedy duo with interpreter Martin Kim. Ryu said he lost eight pounds since starting his workout program and has cut out In-N-Out Burger, but has been behind in running drills. But he took the philosophical approach to his conditioning.

"There are two different in shapes: one to be fit, and one to throw a baseball," Ryu said. 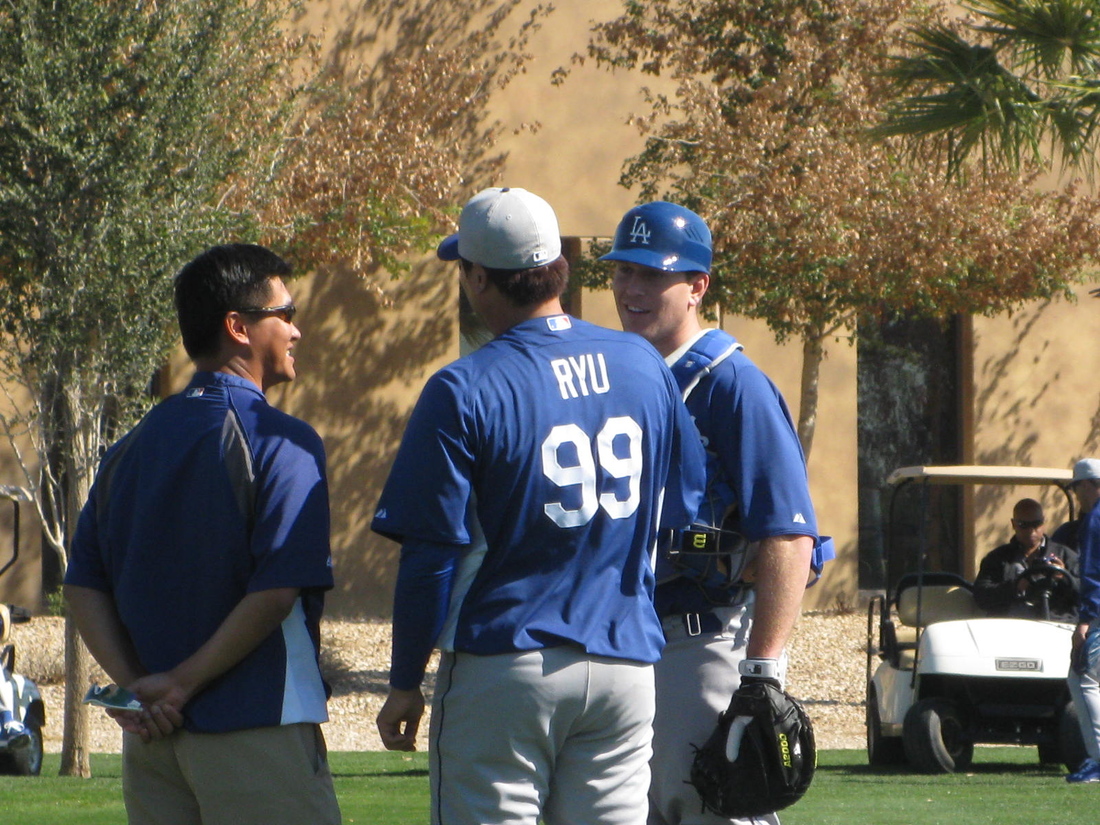 Hyun-jin Ryu and A.J. Ellis talk after the bullpen session

Honeycutt was asked is he was pleased with Ryu's conditioning.

"Truthfully, probably not. Thank goodness we have six weeks to work on that. But you don't like any guys to be working from behind at any aspect of camp," said Honeycutt, who then quipped, "Jumping in with Kersh (Clayton Kershaw) might be the wrong group to be running with."

Ryu's take was different, and drew laughter from the flock of reporters surrounding him.