Herrera was a surprise contributor to the 2012 Dodgers, nine years after he was signed out of high school. Will he play a part in the 2013 Dodgers as well?

Elian Herrera has three gloves in his locker, to accommodate all the positions he plays. In 2012, Herrera's flexibility and hot hitting earned him an unexpected call to the majors, and and provided an inspirational message.

"The best thing I learned was that nothing was impossible. It was a surprise for me when I got called up, and everyone was happy because I was 10 years in the minor leagues," Herrera said. "What I can say to everybody is you never know what can happen. If you want something you have to fight for it, and just try to get it. I learned to never give up, and to just keep going."

The Dodgers signed Herrera as an amateur free agent at age 18 in the Dominican Republic, as a catcher.

"I was really slow and skinny, but I had a good arm. My dad was a big guy, and they assumed I would grow into the position," Herrera said last year. "I had to work hard on my legs, because I want to be behind the plate for nine innings, then I gained speed."

That speed translated into three straight years of at least 30 stolen bases, totaling 108 swipes in the minor leagues from 2009-2011. But what got Herrera to the majors last year was his bat.

Elian Herrera finds a home at top of Dodgers lineup 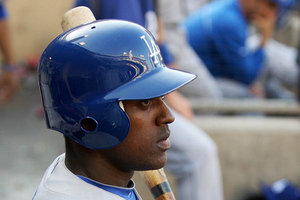 A detailed look back at Herrera after his first two weeks in the big leagues in 2012.

He was hitting .358 with a .381 on-base percentage with Triple-A Albuquerque when he got the call to the Dodgers on May 14, replacing an injured Juan Uribe. Herrera was also able to help fill the void of an injured Jerry Hairston Jr. at third base and left field, an injured Mark Ellis at second base, and even an injured Matt Kemp in center field.

Herrera played everywhere, and he played quite well, especially at first. Through 31 games the 27-year-old career minor leaguer was hitting .305/.407/.390 with 17 runs scored in 31 games, including a pair of game-winning hits to beat the Phillies in Philadelphia.

Unfortunately for Herrera he hit a wall after that hot start, as his .410 batting average on balls in play might have suggested he wasn't likely to continue quite at that level. But a 9-for-64 slump (.141/.179/.234) heading into the All-Star break got him optioned back to Albuquerque. He did well in scattered playing time upon his return, which included a brief six-day stay in August, hitting .333 (6-for-18) the rest of the way, with a .455 on-base percentage.

The bottom line with Herrera is that the Dodgers got a .340 on-base percentage in 214 plate appearances out of a 27-year-old career minor leaguer who was barely on the radar prior to the season.

He enters 2013 well down the depth chart again, but that hasn't changed Herrera's approach this spring.

"I'm ready for whatever position they need me. I don't know what position I will play more, but I'm just ready," he said. "I don't know what can happen. I just try my best. Whatever I can do to make the team, I'll try to do."

It's hard to count him out.

Herrera is under team control, and has 91 days of service time. He has two option years remaining.

Herrera's positional flexibility gives him an advantage, and I think he eventually finds his way back on the roster. I'll guess .259/.334/.347 in 89 plate appearances, with starts at three different positions.

What is your guess for Herrera in 2012? Be sure to guess BA/OBP/SLG, number of starts, number of positions played, and anything else you wish to guess.