Peter Moylan was once part of a formidable Braves bullpen. But now, after two years lost to surgeries, can Moylan find his way into the Dodgers relief staff?

The last six years for Peter Moylan have seen both extremes of health. In 2007, 2009, and 2010, he pitched at least 80 games each season and was a big part of Bobby Cox's bullpen with the Braves. But in 2008, 2011, and 2012, Moylan was limited to under 10 innings each year thanks to separate surgeries, including a Tommy John procedure in 2008. Moylan pitched just 13⅓ innings combined in the last two seasons.

"It was as frustrating a two years you could ever have," said the sidearmer from Australia.

Moylan had back surgery in April 2011 that caused him to miss 4½ months, then shortly after returning developed a torn labrum and rotator cuff in his shoulder that required surgery to knock him out for most of 2012. After getting non-tendered, Moylan signed a minor league deal with the Braves, and was determined to pitch again last season. He was promoted to the Braves in September. 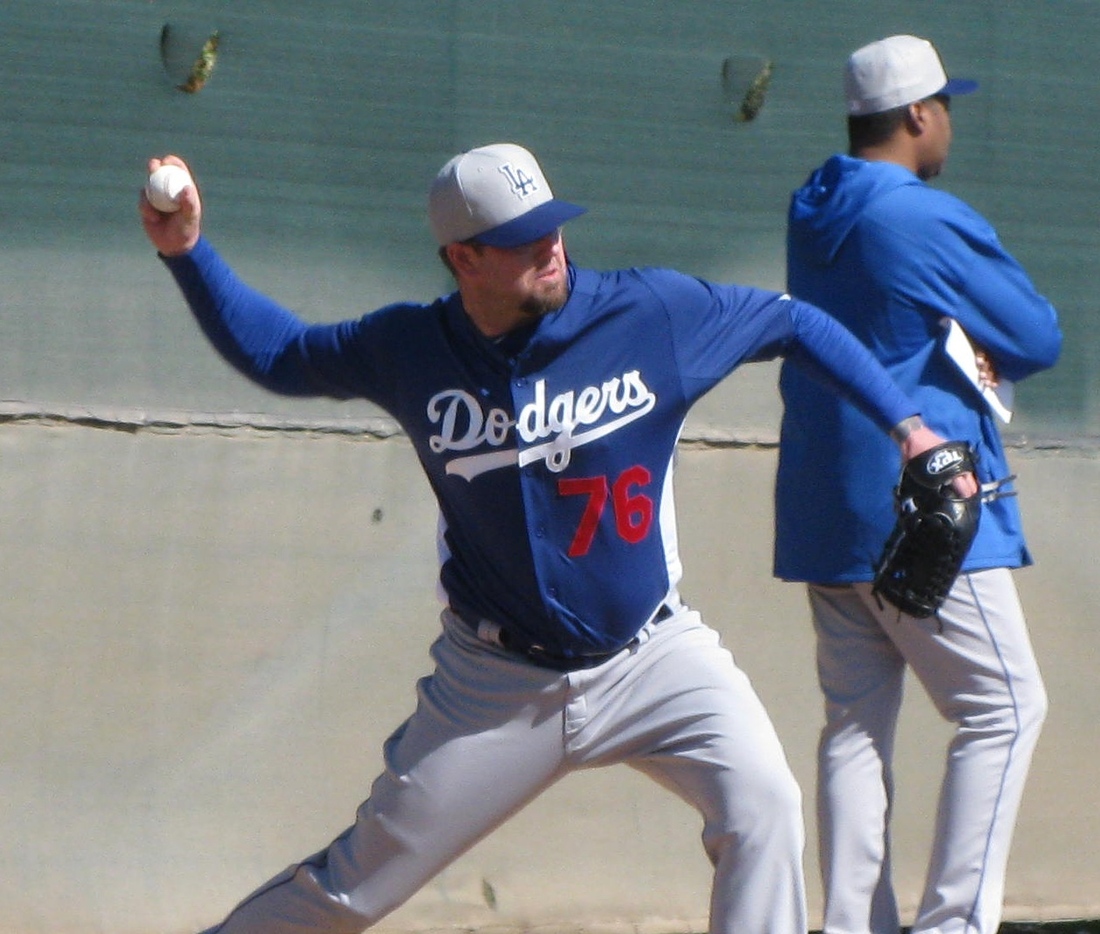 The trademark sidearm delivery of Moylan.

"I wasn't lights out in (Triple-A) Gwinnett. I wasn't bad, but to be honest I probably wasn't 100%. It had been less than 12 months since my surgery, but I wanted to get back as quick as I could," Moylan said. "But now having another six months of recovery time it feels great. I feel really good."

Moylan said his arm feels much better now, and he hopes the second year back from his shoulder injury will give him more strength.

"I saw that when I had my elbow surgery of 2008. I came back in 2009, and the first half of the year I battled through. It wasn't until the second half, after the All-Star break, that I really hit my stride. I'm hoping it's the same with my shoulder," Moylan said. "This is the first time in two years in coming to spring training I feel like I'm healthy."

Moylan has been a ground ball machine in his career, with 63.9% of his balls in play hit on the ground.

"Throughout my career, that's been my role pretty much is to come in and get guys to hit the ball on the ground," Moylan said. "It helps that I throw from the side and my ball sinks, obviously. But I've still got another pitch, a slider, that I can throw at times too. But if I can throw my sinker consistently and it's working, I should get a ton of ground balls."

Since Moylan's debut in 2006, he has the fifth highest ground ball rate among all major league pitchers with at least 200 innings pitched.

Jamey Wright, who made the Dodgers out of spring training as a non-roster invitee in 2012, just missed the 60% cutoff, with a ground ball rate of 59.7%. I think Moylan, if healthy, follows Wright's path.

Moylan set an MLB record in 2009 by pitching in 87 games without allowing a home run, 14 more games than anyone else in one season.

Moylan was listed on the preliminary roster for Team Australia in the World Baseball Classic, but has decided not to pitch in the WBC.

"It's a new team. I didn't want to be here for a week and a half, then leave," Moylan said. "I'd rather get to know my teammates, prove to these guys that I'm committed, and I want to do everything I can to do whatever they want me to do."

Moylan, who was non-tendered by Atlanta on Nov. 30, has five years, 94 days of major league service time, 78 days shy of free agency. Moylan is signed to a minor league contract. If the Dodgers don't place him on the active roster by June 1, they must release him if he requests it.

For five of the last six years, a non-roster pitcher has made the Dodgers' opening day roster, and in the one year it didn't happen (2008) the team purchased the contract of Chan Ho Park by the fourth game of the year. I think Moylan if healthy keeps the NRI tradition alive, makes the team, and puts up a 3.61 ERA in 47⅓ innings.

Be sure to guess how you think Moylan will perform for the Dodgers in 2013. Include ERA and whatever else you wish to guess.