Koufax said he plans to be in camp for the next 10-11 days to work with the Dodgers and do whatever they ask.

It was a generally lazy Sunday at Camelback Ranch during the second day of full squad workouts by the Dodgers, when the crowd started moving very quickly toward a single direction. With Tommy Lasorda already in camp and out and about in full uniform, the commotion meant that one of two famous Los Angeles number 32s had arrived.

Sandy Koufax made his 2013 camp debut for the Dodgers on Sunday, briefly talking with some pitchers on the field near the end of their workouts.

Koufax, who was hired in January as a special advisor to team chairman Mark Walter, said he was happy to return to the Dodgers.

"This is the only organization I've ever played in, and been in. I came here with Jackie, and Gil, and Duke. I played with great people then, and great people with Don, Tommy, Willie, and Maury," Koufax said. "I want to see this organization be a winner again. I don't know if I can do that much, but I'll try and help."

Koufax said he plans to be in camp with the Dodgers for the next 10-11 days or so, and that this would likely be his only visit to Arizona this spring. His one scheduled trip to Dodger Stadium will be June 8 for old timers day, when the Dodgers will honor the 50th anniversary of the 1963 World Series winners.

No, Koufax said, he wouldn't throw. But he is excited to visit the team in Los Angeles again.

"When I come to Dodger Stadium for one day, it feels like home," he said. "I wouldn't have done this anywhere else. Any place else I was working with pitchers, I went to see friends."

Koufax debated whether or not he wanted to return to baseball in a more public capacity. 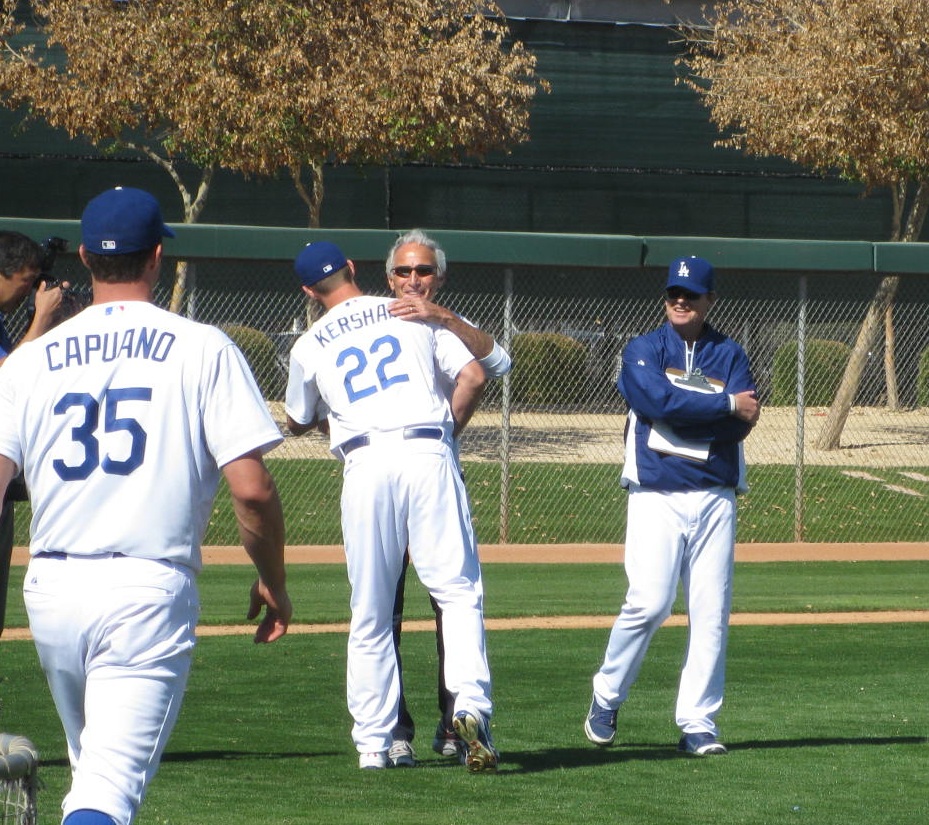 Sandy Koufax and Clayton Kershaw hug on Field 2 at Camelback Ranch on Sunday.

"The hard part is, my life is good. If I taking a chance of ruining it with you guys," he joked to reporters while laughing, "My life has been good. I thought, do I want to kind of open it up to all of this again? I decided to give it a try.

"I'm on a one-year contract, so if I'm not enjoying it it's only a year.

Koufax said though he doesn't have any other scheduled visits planned, he will likely have other opportunities to visit the team.

"I will do whatever they ask," he said. "Rick Honeycutt is the pitching coach. He is responsible for all of these guys. I'm just here to help."

Koufax likes what he sees in the 2013 Dodgers.

"If Josh becomes who Josh Beckett was a while ago, it's an awesome staff. With (Zack) Greinke, and if Chad (Billingsley) is healthy, and Clayton (Kershaw), it's a pretty great staff," Koufax said. "If everybody's healthy on the ball club, like (Matt) Kemp, you've got some great players."