Dodgers new slogan 'A Whole New Blue': Do you like it or not?

Share All sharing options for: Dodgers new slogan 'A Whole New Blue': Do you like it or not?

The Dodgers have begun to unveil their new marketing slogan, "A Whole New Blue," for the 2013 season. The new slogan and design is atop the team's website, and has been used in various radio and print ads, as well as at Fan Fest on Jan. 26.

The club plans to use the slogan in digital and television advertising beginning in March.

"A Whole New Blue" is more than a tagline or advertising campaign," said team chief marketing officer and executive VP Lon Rosen in a statement. "It's a whole new way of thinking about Dodger baseball. It’s about a new attitude embraced by the team that will be reflected in the fan experience at Dodger Stadium this season."

Last year's slogan for the Dodgers was "An LA Tradition." In 2011 it was "It's time for Dodger baseball," a nod to the phrase with which Hall of Fame announcer Vin Scully begins his broadcasts. The new campaign was designed by Walton Isaacson, the firm hired as the team's new advertising agency.

"We’re thrilled to be involved in the overall creation and execution of this statement campaign," said Aaron Walton, co-founder of Walton Isaacson. "The Dodgers have assumed an aggressive, leadership position in Major League Baseball, sending a clear signal that they’re willing to take every step possible to dramatically improve the team and heighten the adrenaline level at Dodger Stadium."

My question to you: Do you like the new slogan? 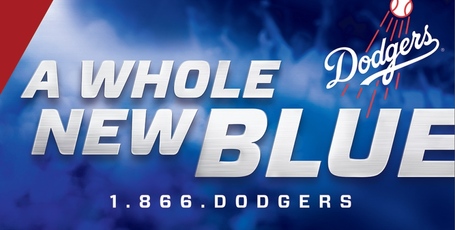