Some combination of Carl Crawford, Mark Ellis, and Skip Schumaker appear most likely to bat atop the Dodgers lineup this season.

One of the questions for the Dodgers heading into the season is deciding which player will bat in the leadoff position. Hanley Ramirez is batting leadoff for the Dodgers in their spring training opener on Saturday, but don't look for him in that spot very much during the season.

"It's tough to put Hanley there. Hanley is a guy who could hit up there, because he runs and he pretty much hits everybody," manager Don Mattingly said. "It puts me in different kinds of binds though because against lefties, whom do I protect with?"

Mattingly prefers Ramirez hitting directly behind Adrian Gonzalez, something he did in 28 of 36 games after the trade with the Red Sox. Ramirez is hitting leadoff Saturday in part to help get him to three plate appearances quicker. Mattingly plans to get his World Baseball Classic players (Ramirez, Gonzalez, Luis Cruz) three PA per game instead of two in the early going.

"It's two-fold for Hanley, which helps us because I know he's in shape from winter ball," Mattingly said. "It gets him more at-bats and gets him ready for the WBC, but also we get to see him play some more time at short, which is nice for us."

That Aug. 25 transaction transaction with Boston not only transformed the Dodgers' lineup for 2012, but also for 2013 and beyond as Carl Crawford will join the lineup this season. Eventually.

Crawford is recovering from elbow surgery and will be eased back into the lineup during spring, including missing the first week of games. But once Crawford rejoins the lineup, he'll likely be at the top of the order, at least against right-handed pitchers.

"Carl for me would be the most natural guy up there," Mattingly said. "Mark Ellis could be natural for that spot against lefties. His on-base was pretty good and he kind of hammered lefties. In his career he's been pretty even but last year was a pretty good differential left-right."

Mattingly also said Skip Schumaker would be an option to bat leadoff, or at least at the top of the order against right-handed pitching. Schumaker, a left-handed hitter, has hit .305 with a .359 on-base percentage against righties in his career.

"The main thing is to get some guys on for that middle," Mattingly said. "We'll be tinkering with that all through spring. We'll put Skip in there some, and some other guys."

That middle of the order, which includes Ramirez, is featured on the cover of the spring training edition of Dodgers Magazine: 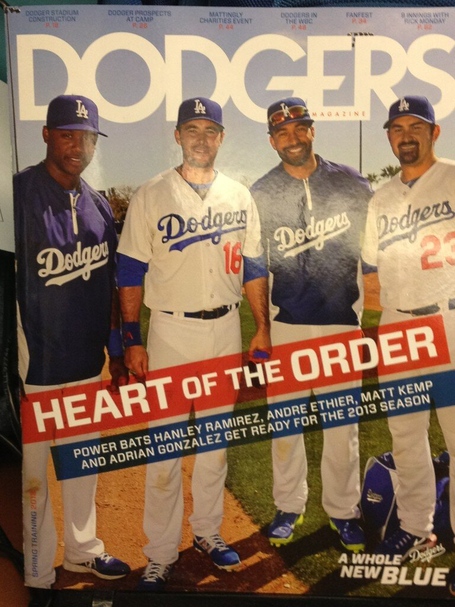 The conversation Saturday morning regarding leadoff hitters turned playful when a few reporters referred to me asking for catcher A.J. Ellis and his .369 career OBP to bat at the top of the order. I had long since given up that fight, mostly because it's never going to happen, and suggested instead that the slow-footed Ellis bat second, where he started five games in 2012.

Mattingly jokingly asked, "You want him to clog those things up?"

"He could clog it up, or he could make an out and sit back next to you on the bench like some of the guys you had up there last year," I replied.