After 142 days of deprivation, we finally have a Dodgers game to enjoy, as they battle the White Sox in their Cactus League opener at Camelback Ranch. Sure, it's the first of 40 - yes, forty! - spring games for the Dodgers, but after four months without baseball we'll take what we can get.

The Dodgers are the designated home team on Friday, so they are in the home white uniforms while the White Sox are wearing black tops with gray pants.

Right-handed pitcher Matt Zaleski, 31, is the only player from the minor league side suited up for the White Sox today. He's wearing number 88.

The Dodgers added their logo to the building with their offices and clubhouse, just beyond the left field wall at Camelback Ranch. In previous years the building had no logo, which made it weird when contrasted against the big Sox logo on the building in right field.

Here is my work station for most of the next five weeks. God bless baseball: 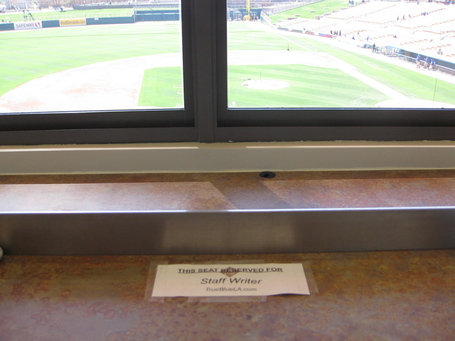