The two new starting pitchers didn't allow a run in their Dodgers debut.

Zack Greinke and Hyun-jin Ryu each made their Dodgers debut on Sunday, and combined for three scoreless innings as the Dodgers tied the White Sox 2-2 at Camelback Ranch.

Greinke struck out two in his two innings of work, and allowed just one hit.

Ryu was sharp in his one inning as well, with a strikeout and one hit allowed. The one hit was a triple by DeWayne Wise, which Ryu said was a curve ball that hung. Ryu was shown a knew grip for his curve last week by Sandy Koufax.

"He was teaching me how to throw a curveball but I guess it didn't really work today. I'll continue practicing," Ryu told reporters, per J.P. Hoornstra of the Daily News.

But that wasn't even the most awkwardly fun moment involving Koufax on Sunday. David Brown of Yahoo! Sports, aka The Answer Man, caught up with the Hall of Famer on Sunday morning and tried to get his reaction to a Koufax reference in The Big Lebowski:

Sandy Koufax: (Leans in with ear) From what?

Sandy Koufax (starting to walk away): I’m kind of a conscientious objector [to] the digital revolution.

There is more to the interview, though that line by Koufax was pretty funny.

The game went on after the departures of Greinke and Ryu and since this was just the second game of the spring there were plenty of firsts for the Dodgers. The Dodgers scored their first run of the Cactus League in the third inning when Tim Federowicz doubled and scored on a single by Hanley Ramirez, though Ramirez was caught and tagged out after rounding first base too far.

The first real injury scare came in the seventh inning, when Elian Herrera was hit by a pitch while trying to bunt. A fastball from Jacob Petricka hit Herrera in the helmet, though he stayed in the game.

"If I didn't move quickly I'd be dying right now. It was coming right at my face," Herrera told reporters, per Bill Plunkett of the Orange County Register.

The first home run of the spring was hit by Luis Cruz in the sixth inning, in his third and final at-bat of the day. He deposited a hanging curve by Jhan Marinez into the Dodgers bullpen in left field to tie the game at 2-2.

That's the way the game ended, as the Dodgers couldn't plate a run in the ninth inning off old friend Ramon Troncoso, now a non-roster pitcher with the White Sox. But despite the sister-kissing ending, the game was still beautiful, in an American Beauty sort of way. 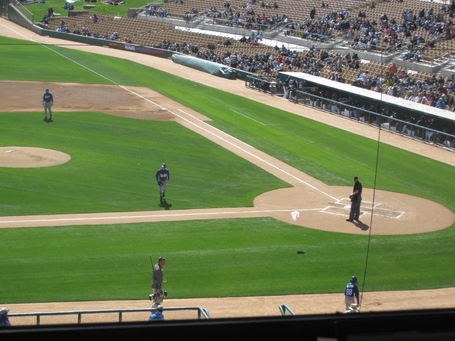 Both Greinke and Ryu line up to pitch on Friday, when the Dodgers have split squad games against the Padres at Camelback Ranch and against the Angels in Tempe.

The Dodgers host the Cubs on Monday afternoon at Camelback Ranch, with a few more firsts. It will be the first Dodgers game televised in 2013, with Vin Scully on the Prime Ticket call. And it will mark the return to the game mound for Chad Billingsley, out since Aug. 24 with a partially torn ulnar collateral ligament in his right elbow.