The new video boards above the left field and right field pavilions are expected to be 20% larger than the old scoreboards at Dodger Stadium.

The Dodgers on Thursday unveiled a few more details about the new video boards that will reportedly have the highest pixel densities in Major League Baseball. The new 1080p high definition boards will show what a Dodgers release claimed would display "some of the clearest images around the League."

The two new video boards will be located above the pavilions in both left field and right field, and will total approximately 2,488 square feet of combined video space on both boards. Both video boards are nearly 78 feet wide and are the original hexagonal design that was used when Dodger Stadium opened in 1962. At the center both boards will be 38 feet high, and on each end will be 24 feet high. 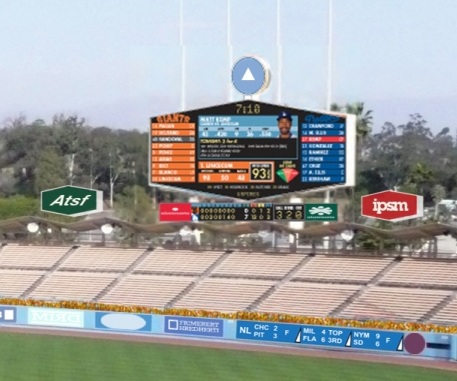 A rendering of the right field scoreboard.

The boards were built and designed by ANC Sports, and senior vice president Chris Mascatello estimated in an interview that the video boards are roughly 20% larger than the old boards at Dodger Stadium.

"ANC’s technologies, integration capabilities and game day services will help to keep our fans entertained and informed, while providing them a most memorable experience at every game at Dodger Stadium," said Dodgers chief marketing officer Lon Rosen, in a release. "Integrating high-definition video screens into the original hexagonal scoreboard shape will not only provide some of the most impressive visuals in sports, but also retain our classic ballpark feel."

The boards will have the ability to either show video on the full screen, show stats, or a mix of both.

"The displays will be operated by ANC’s VisionSOFT™ and enhanced scoring system designed to display large 1:1 greater than high definition resolution content," the Dodgers stated in a release. "As the first 64-bit render content system in sports, VisionSOFT and the 1080p control room infrastructure will maximize the image clarity and continuity across more than 2.3 million pixels on each screen."

Beneath each video board will be a 10mm LED strip six feet high and 69 feet in length, and there will video boards in both the left and right field walls measuring six feet high by 61 feet wide as well.

"We've really taken big steps to not just bring Dodger Stadium up to current day standards, but we think this is going to be the cutting edge and next generation deployment of video technology in Major League Baseball," said Mascatello. "The video product will enable Dodgers fans to have 1080p HD resolution images in addition to out of town scores, all kinds of stats provided by MLB and Elias."

The first game at Dodger Stadium this year is Friday, Mar. 29 against the Angels in a freeway series contest, with opening day three days later.