Coming off consecutive 73-89 seasons, Tommy Lasorda led the Dodger to the 1988 World Series title and secured a place in the Hall of Fame.

How many times have you turned on Dodger Talk and heard someone say I wish this manager was more into the game or more demonstrative? Certainly Joe Torre and current manager, Don Mattingly are not the type to give big motivational speeches in the clubhouse or scream at an umpire.

Most likely, the person that called had one person in mind when he or she describes that manager: Tommy Lasorda, who had a unique style; certainly not the quiet man that Walter Alston was nor as explosive as his contemporary Billy Martin.

Lasorda had great success from 1977-1985 as seen below, but now in 1988, he was looking at the downside of Pedro Guerrero and Fernando Valenzuela's careers and the recent back to back 73-win teams did not foretell great success in 1988.

How acquired: After serving four years as the Dodgers third base coach, Lasorda was named manager on September 29, 1976, replacing Alston. Lasorda's first full season was in 1977.

Prior managerial experience: Lasorda had one of the great introductions as a manager, he led the Dodgers to back-to-back NL pennants in 1977 and 1978, losing the World Series to the New York Yankess, each time in six games. The Dodgers would finally beat the Yankees in 1981 and the Dodgers would win NL West titles in 1983 and 1985. From 1977 to 1985, the Dodgers led the NL with a 780-627 record, one World Series victory, three pennants, five division titles with two other close second place finishes.

1988 stats: The Dodgers lost on opening day but then ran off five straight wins. They would go back and forth during April and May, and their biggest deficit was 1½ games but after being tied on May 25, they never trailed again, and led the division by as much as 9½ games.

Regular season game of the year: In a game that used 19 players, the Dodgers beat the Cubs 6-5 in Chicago on May 10. Lasorda used six pitchers: Belcher, Pena, Orosco, Howell, Holton and Hershiser for the save. Kirk Gibson hit the game-winning home run in the top of the 14th inning.

NLCS performance: Of all the games Lasorda had managed, perhaps Game 4 of 1988 NLCS stands out because of all the circumstances surrounding it. The Dodgers were down 2-1 in the series and had lost the two games started by Orel Hershiser. Hershiser would not be able start the next three games so the odds seemed slim that the Dodgers could come back especially with Dwight Gooden starting Game 4. And then reliever Jay Howell was suspended for three days. August acquisition John Tudor started for the Dodgers but he got behind 4-2 after six innings.

Suffice to say there will be more to say about this game later but Lasorda then had six relievers including a memorable appearance by Orel Hershiser to save the game.

A humorous note from the Orlando Sun-Sentinel game recap recounted when Jesse Orosco had just walked Keith Hernandez to load the bases in the 12th inning and Daryl Strawberry was up with a chance to win the game:

Later, when asked what he had told Orosco, Lasorda said, ``I just offered him some words of encouragement and let him know we were all behind him.``

A female reporter said she was reading his lips and thought his opening line was something like, ``What the heck are you doing?`` 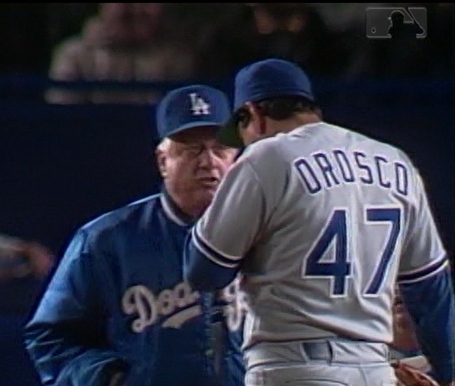 One thing Lasorda had no problem doing was taking his starter out if he felt he needed to make a change no matter how early it was in the game. In Game 1 of the Series, Tim Belcher gave up the grand slam to Jose Canseco but it was still only 4-2 in second inning. But with a runner on first and two outs, he had Danny Heep pinch hit for Belcher (to no avail) and then handed the game to his bullpen for next seven innings. The mighty A's would never score as much as four runs in a game the rest of the series, let alone one inning, and the Dodgers would keep it close for Kirk Gibson to win it in the ninth.

Post-1988 managing career: Lasorda never led the Dodgers to another playoff win (in fact the Dodgers wouldn't win another playoff series until 2008) On June 26, 1996, Tommy was admitted to the hospital due to an issue with an ulcer. While there, the doctors discovered that Lasorda had suffered a heart attack and they did a procedure to clear out his arterial blockage. In July, Lasorda retired though some thought he wanted to come back and manage. Lasorda finished his managerial career with a 1,599-1,439 record (.526), two World Series victories, four NL pennants, and eight division titles. He was voted into the Baseball Hall of Fame by the Veteran's Committee in 1997 and the Dodgers retired his number later that year.

Where he is now: Tommy was named VP of the Dodgers upon his retirement and for the most part, his role has been advisory and community relations related. However, he did serve as interim General Manager in 1998 after Fred Claire was fired by Fox, who had just bought the team. Lasorda's most famous trade was uber-prospect Paul Konerko and Dennys Reyes for Cincinnati Reds closer Jeff Shaw. The Dodgers had to sweat out Shaw having the opportunity to request a trade at the end of the season due to the CBA. Shaw made fans nervous for the next three seasons as he closed out games for the Dodgers. Paul Konerko would spend a month in Cincinnati and then was moved to the Chicago White Sox, and 415 home runs later, Konerko is still there.

Tommy Lasorda has continued to serve in an advisory role since he stepped down as General Manager in 1998. Lasorda was named Special Advisor to Chairman during Frank McCourt's ownership period.