Amy K. Nelson wrote an oral history of the Costacos brothers, creators of many iconic sports posters of the 1980s and 1990s.

Share All sharing options for: Poster boys: Kirk Gibson, Bo Jackson, and a recapture of youth

As someone who grew up in the late 1980s and early 1990s, I had many sports posters on my wall. A large chunk of those posters were created by the Costacos brothers, who revolutionized the industry.

Amy K. Nelson caught up with the brothers, as well as various photographers and subjects of the posters for an oral history of these iconic posters at SB Nation:

Working out of their father's garage in downtown Seattle with a small group of childhood friends, the Costacos soon maxed out their credit line to create a business that captured the biggest sports stars of their era in a way that had never been done before. They convinced the athletes to pose for photographers in get-ups that were at once playful and positive, creating lasting and captivating images. They called Giants’ slugger Kevin Mitchell "Bat Man" and dressed him in a cape; running back Herschel Walker was "The H-Bomb," exploding out of a sea of fire.

"What the poster did was help me create my image," says Shawn Kemp, the one-time All-Star for the Seattle SuperSonics. "Because that stuff was big; there was no Internet, no YouTube. That stuff was very important back then, to do those little things to get your name out there."

The post also mentions two Costacos posters that I had on my wall, one featuring Kirk Gibson: 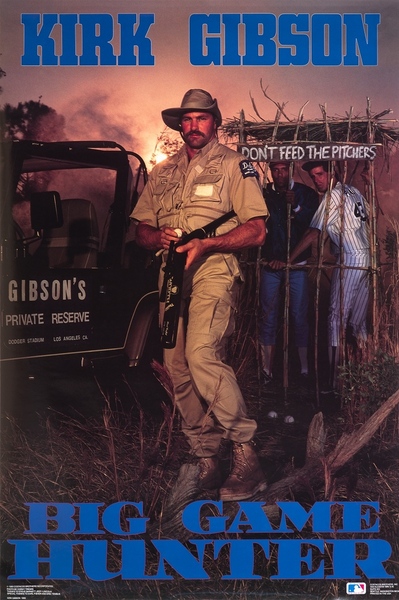 ...and one with Bo Jackson:

We shot "Big Game Hunter" on a road near Dodgertown. Here we are out in the boonies. I remember the whole jeep and we had the cage back there; those were supposed to be the pitchers I captured with my gun.

I also had a poster featuring 1992 Dodgers outfielders Eric Davis, Brett Butler, and Darryl Strawberry that was titled "Triple Threat." I believe that was a Costacos poster as well, or was at least in their style. Though it's more sad to look back on that now since outside of Butler that outfield, and team, was a colossal bust.

But it's still fun to look back at a lot of those posters, and read about how they were conceived.