It's fitting we end our profiles of the 1988 Dodgers with a look at Orel Hershiser, who carried the team on his back and was untouchable for over two months.

The Dodgers of 1988 are remembered for the fiery play of Kirk Gibson and his one iconic moment, the brash leadership of Tommy Lasorda, and the clutch play from a group of unknowns who called themselves the Stunt Men. But the reason the 1988 Dodgers overcame the odds and won the World Series was largely due to the exploits of Orel Hershiser, who had a great season and ended with one of the finest extended runs in baseball history.

The Dodgers are currently blessed with a great starting pitcher in Clayton Kershaw, who has often been compared to Sandy Koufax. But Hershiser's run in 1988 was fresh in my mind when Kershaw won his 20th game in 2011:

I never saw Koufax myself, but my reference point for great Dodger pitching is Orel Hershiser at the end of 1988. Every time Hershiser took the mound, I knew the Dodgers would win. That's how much confidence he inspired. That's the way it is for Kershaw now. I have never felt more confident in the Dodgers than I do with Kershaw on the mound.

In 1988, it was Hershiser who was best, and was the last man standing come World Series time.

How acquired: The Dodgers drafted Hershiser out of Bowling Green University in the 17th round of the 1979 draft. 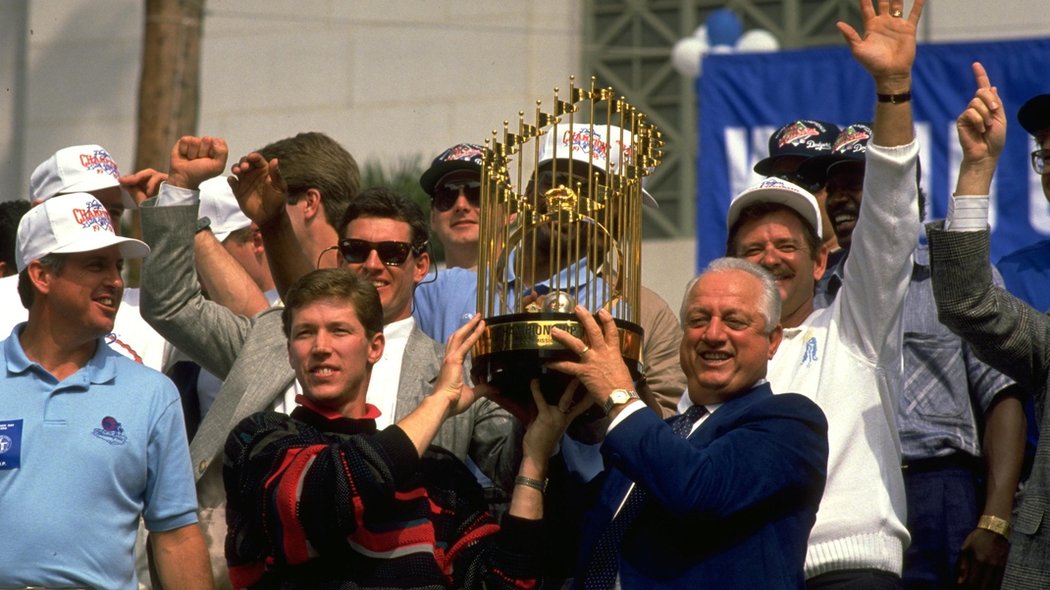 The profiles of all 38 players and manager Tommy Lasorda, all in one place

Prior MLB experience: Hershiser was sneaky good in a hybrid role in 1984, with a 2.66 ERA in 20 starts and 25 relief appearances, totaling 189⅔ innings in his rookie season (he also pitched eight innings in 1983). But in 1985 Hershiser was great, at 19-3 with a 2.03 ERA for the NL West winners, with the lowest ERA by a Dodger since Sandy Koufax.

1988 stats: Hershiser began the year on fire, with wins in his first six starts and a 1.74 ERA. His seventh outing of the year wasn't even a start, but rather a scoreless 14th inning for a save, and a harbinger of things to come in October. That was the first of three different six-start winning streaks on the season for Hershiser, who was humming along nicely at 16-7 with a 3.06 ERA beginning play on Aug. 19.

Hershiser shutout the Expos that night, then allowed two runs each in a a pair of complete games in his next two outings. Montreal put two runs up in the fifth inning on Aug. 30, but those were the final runs Hershiser would allow in the regular season.

Each of his next five starts were shutouts, which led to ...

Regular season game of the year: His best game of the regular season was probably a game in which Hershiser didn't even get a decision. He came into his final start of the year on Sept. 28 in San Diego needing 10 innings to break Don Drysdale's record for consecutive scoreless innings.

Sure enough, Hershiser pitched nine scoreless innings for his sixth consecutive start, and the Dodgers, who clinched the division two nights earlier, obliged by not scoring on offense. Hershiser recorded three more outs in the 10th do give him 59 straight innings and a new major league record (note: the streak will get its own post later in the year).

NLCS performance: Hershiser came into the NLCS on fire, and had five days of rest prior to his Game 1 start against the Mets. It looked to be business as usual for Hershiser, who took a 2-0 lead into the ninth inning and extended his scoreless streak to 67 consecutive frames. But a run in the ninth inning, the first allowed by Hershiser in exactly five weeks, ended his night. Closer Jay Howell needed to record two outs to protect the 2-1 lead, but instead gave up a two-run double to Gary Carter for a 3-2 Mets win.

Rain in New York pushed the schedule back, and allowed Hershiser to start Game 3 on three days rest. He allowed three runs in seven innings, the most runs he had allowed in any one start since Aug. 14, but the Dodgers took a 4-3 lead in the eighth inning. Again, Jay Howell was brought in to protect a one-run lead for Hershiser but this time things fell even worse for the Dodgers. Howell didn't make it through one batter before he was ejected and eventually suspended for having pine tar in his glove, and the Mets rallied for five runs in the inning. The Dodgers trailed 2-1 in the series, and their two losses came in Hershiser starts.

After Howell's suspension, the team got a pep talk from their manager, per Robbie Andreu of the Orlando Sun-Sentinel:

Before Game 4 Sunday, Dodgers manager Tommy Lasorda gave his team an emotional speech, asking them to make whatever sacrifice was needed to win the crucial game without Howell.

Go into the bullpen is just what Hershiser did, in the 12th inning with the Dodgers clinging to a one-run lead. He entered with the bases loaded, and had to face Kevin McReynolds with two outs. Hershiser was the last pitcher left, and he got McReynolds to pop out to shallow center field, to tie the NLCS at two games apiece. Lasorda was relieved after the game, per the Los Angeles Times:

"I told the guys on the bench that if Hershiser walked in the tying run and we had to keep playing (several more innings), that they could just wear black armbands during the next game," Lasorda recalled.

" 'Cause I'd have killed myself.

Even crazier is that after Hershiser started and threw 8⅓ innings on Oct. 4, threw seven innings on Oct. 8, and recorded one out for a save on Oct. 9, he even warmed up in the eighth inning of Game 5 on Oct. 10, through he wasn't used.

On Oct. 12 Hershiser was used, as he started Game 7 at Dodger Stadium, and he delivered. The Dodgers jumped on Ron Darling early and had a 6-0 lead by the second inning, and Hershiser cruised to the 12th complete game shutout in Dodgers postseason history.

For the series against the Mets, Hershiser was 1-0 with one save, a 1.09 ERA, with 15 strikeouts and seven walks in 24⅔ innings.

"It takes a pure athlete as coordinated as he is to maintain that kind of groove for so long. It would be like a bowler rolling 300 games every day for six weeks."-Pitching coach Ron Perranoski to SI, 10/31/88

World Series performance: Hershiser picked up where he left off in Game 2 against the 104-win Athletics, and had one of the greatest individual games in Dodgers history. Not only did Hershiser shutout the A's on three hits - his seventh shutout in his last 10 starts, with a 10-scoreless-inning start mixed in as well - but Hershiser had three hits himself, including a pair of doubles.

"I couldn't figure out why I was missing his pitches in Game 2," Oakland's Jose Canseco told Peter Gammons of Sports Illustrated. "Then I looked at the videos and I saw how much the ball was moving. In Game 5, I got a dose of his curveball, which is in Bert Blyleven's class. Great stuff, great pitcher."

Hershiser's game score of 87 in Game 2 was the fourth best in franchise history, and he joined Sandy Koufax as the only Dodgers with two shutouts in the same postseason. But he wasn't done.

Hershiser closed out the A's in Game 5 with another complete game, and struck out Tony Phillips for the final out. Oakland actually got to Hershiser for two runs, but that couldn't put a damper on one of the great finishing runs by any pitcher in major league history.

Hershiser had a great finishing kick in 1989 as well, with a 2.05 ERA over his final nine starts, but he lost seven straight decisions thanks to six total runs of support in the first eight of those games. Hershiser was so intent on evening his record in his final start that he pitched 11 innings and threw 169 pitches to earn the win.

Just four starts into the 1990 campaign, Hershiser's shoulder was done, and reconstructive surgery cut into two seasons. He recovered to pitch 200 innings in both 1992 and 1993, and Hershiser was on pace to do so again in 1994 before the players strike prematurely ended the season.

Hershiser moved onto the Indians for three seasons, including two more trips to the World Series with Cleveland. In 1998 he did the unthinkable and signed with the Giants, then played for the Mets in 1999 and tasted more playoff success. Hershiser, who was 4-0 with a save and a 1.71 ERA in eight postseason games, including seven starts, for the Dodgers, was 4-3 with a 3.28 ERA in 14 postseason games, including 11 starts, with Cleveland and New York.

A 41-year-old Hershiser returned home to the Dodgers in 2000, but things didn't go well at all. After just two starts Hershiser had a respectable 4.09 ERA, but then hit the click in the roller coaster. In his final eight big league games, Hershiser allowed 31 runs and recorded 41 outs. His 13.14 ERA in his final season is the highest ERA ever by a Dodger with at least 15 innings in a season.

Where he is now: Right after his playing career ended, Hershiser moved to ESPN, where he served as an analyst in 2000 and 2001. He then moved to the Rangers for four years, where he served as pitching coach then in the front office. Hershiser returned to ESPN in 2006, and 2013 will be his fourth season as a television analyst on Sunday Night Baseball.