Manager Don Mattingly, general manager Ned Colletti, and Puig himself weigh in on the latest exploits of the 22-year-old, .500-hitting Cuban outfielder with no spot to play on the big league club. Yet.

Yasiel Puig continued his spring showcase on Tuesday, leading the Dodgers to a 7-1 win over the Athletics at Camelback Ranch. Puig had four hits, including his third home run of the spring, and is hitting a robust .500 (23-for-46) in the Cactus League.

"At this point he's creating an expectation that he can't live up to, that nobody could live up to," said manager Don Mattingly. "I just try to temper it, where we take a realistic look."

Puig is defying reality though with his hot bat. Asked when was the last time he was this locked in at the plate Puig said, "The day before yesterday," laughing, before adding, "Probably back in Cuba."

The organization would like Puig, who played just 23 games in the minors in 2012 and 20 more contests in winter league ball, to get more baseball experience under his belt.

"I do think he needs to play. Spring training is a very interesting time of the year. It's certainly not the regular season. You have to measure it, and you have to put the proper value on it," said general manager Ned Colletti. "The more he plays, I think the better he'll get, and the more refined he'll get. 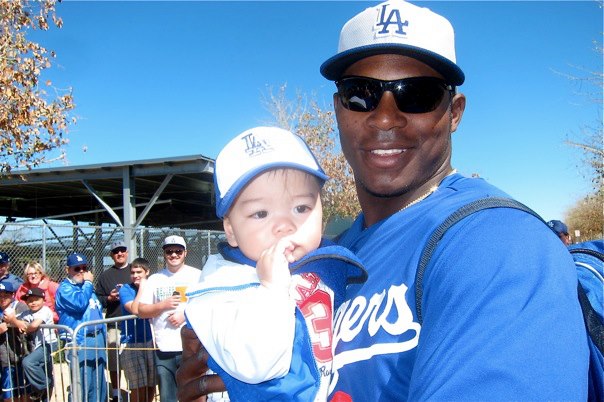 Yasiel Puig is gaining more and more fans by the minute. (Photo courtesy of JJ24)

Both Colletti and Mattingly have marveled at how Puig has played.

"We all love how he plays. It's rare in a spring training game that everybody will stop to see when somebody hits. I think that's what has happened," Colletti said. "When he comes up, people stop what they're doing."

On Tuesday, those people stopping to watch Puig bat saw a home run in the first inning, a single and stolen base in the third inning, a single in the fifth inning, then a booming triple in the seventh inning. Puig narrowly missed a cycle, and would have had it had he ran hard out of the box on the fifth inning single, as he was thrown out trying to stretch it into a double.

Mattingly said Puig came up to him in the dugout and said he made a bad play.

"He knew right away that he didn't run out of the box," Mattingly said.

"He's got a chance to be really, really good. There's not a whole lot not to like," Mattingly said. "The only negative is that he's overaggressive at times, and it's not a real negative. In a sense, that's a positive."

Colletti said there is a chance Puig might stay with the team for the Freeway Series, but that those discussions haven't yet been made. But the fact remains that Puig is still on the roster and hasn't yet been optioned, which by definition still gives him a chance at making the opening day roster.

"We still have 12 days to go. We'll see. He's still here. He's still competing. He still has a chance," Colletti said. "It depends on a few different things: the composition of the club, and how we think he'll do against the best at the highest level."

The composition of the club currently includes Carl Crawford and Matt Kemp, both outfielders coming off surgery and both slated to make the opening day roster. Crawford has been the designated hitter the last three days and has yet to play the field in a game, though he has increased his range during throwing drills.

"I think he'll be ready, barring a setback," Colletti said. "I was watching him today during cutoff and relays, he's throwing probably 100 to 110 feet right now. The ball had good life to it, and he'll continue to get stronger."

"At this point he's creating an expectation that he can't live up to, that nobody could live up to." -Don Mattingly, on Yasiel Puig

But back to Puig for a moment, Colletti heard the comparisons to Bo Jackson offered his own comparable players to Puig, keeping it in a spring context.

"He reminds me of when (Mark) McGwire and (Jose) Canseco came up with Oakland, in the late 80s," Colletti said. "I was with the Cubs playing over at Municipal Stadium and we had heard all about them, but it was like, 'Whoa'."

Whoa, indeed. That's what Puig has done. He has turned a 'no chance' situation into one hell of a ride. It really is the best kind of a 'problem' for an organization to have.

"I'd rather be talking about what happens to a guy hitting .500 and playing with great enthusiasm and passion, than having only two outfielders and wondering who is going to be the third one," Colletti said.

In the end, it probably doesn't matter what Puig's Cactus League batting average is, even if it begins with a five. But it sounds like Puig has the perspective that Mattingly preached and Colletti alluded to.

"I'll have to understand (if they send me down)," Puig said. "Wherever I go, Single-A, Double-A, Triple-A, I'll play hard. Wherever I play, God will be with me."

The Dodgers head to Surprise on Wednesday for the second time in five days, though this time they will be facing the Royals instead of the Rangers. Aaron Harang starts for the Dodgers against Kansas City, while Wade Davis starts for the Royals. In case you were wondering, yes. Puig is listed on the travel roster for Wednesday's game. No Surprise here.

Back at Camelback Ranch, Zack Greinke will throw 45 pitches in a minor league game in the afternoon, with A.J. Ellis catching him.