Spring training 2013: Dodgers put in work in 9-5 loss to Mariners

The Dodgers lost their third straight game on Saturday in Peoria.

Share All sharing options for: Spring training 2013: Dodgers put in work in 9-5 loss to Mariners

The Dodgers dropped their third straight game on Saturday with a 9-5 loss to the Mariners in Peoria. Chris Capuano and Chad Billingsley each allowed three runs in their second appearance of the spring, but we are still in that point in the spring where process matters more than results.

"Bills gets work, Cap gets work," was the postgame summary from manager Don Mattingly.

Capuano started and retired the first six batters he faced, including three via strikeout. But the seventh batter was Mike Zunino, the 22-year-old catcher rated as the 17th best prospect in the game by Baseball America. Zunino went deep to break up Capuano's fun, then three batters later Franklin Gutierrez took Capuano deep for a two-run shot to tie the game at 3-3.

Gutierrez struck again in the fourth inning, this time with a double against Chad Billingsley to drive home two. Billingsley allowed three runs on five hits and a walk in his 2⅓ innings, and was removed before his scheduled three innings with a pitch count of 48. He struck out two.

Yasiel Puig impressed in a couple of ways on Saturday. He lined a double to the center field wall, his third of the spring. He showed off his speed as he turned on the jets, looking to turn it into a possible triple, but quickly picked up third base coach Tim Wallach, who held him at second on the play.

"He made a good decision at second base, stopping there," Mattingly said.

Puig is hitting .389 (7-for-18) in the early going, and Mattingly gets asked nearly every day about Puig, sometimes more than once. But what if Puig, with all of 23 games of professional experience after a year and a half without playing organized baseball, continues to impress during spring training? Might he then be used as a temporary replacement if Carl Crawford opens the season on the disabled list?

"If he continues to do what he's doing, you'd have to look at things like that, but honestly it's a real good chance of sending somebody going in the wrong direction. You end up getting yourself in trouble. You want to develop," Mattingly said. "He's a kid still, and he's still raw. You don't want to see a guy get beat up. Maybe he never struggles, but that's usually not the case. Usually the guy has to go through some stuff, and that's when he develops.

"We don't have to make any decisions right now. He's going to continue to get at-bats. He's fun to watch, I like putitng him in there, and I've played him all over."

Puig is the only Dodger to play in a Cactus League game every day this spring.

Before the game the Mariners honored a fan named Walter Weaver, a cancer survivor who has been free of the disease for a year. Both the Mariners and Dodgers lined up on the foul lines and watched as Weaver ran around the bases in a promotion called a "home run for life." 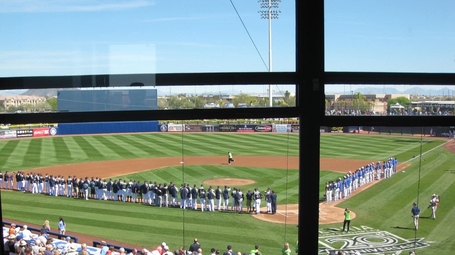 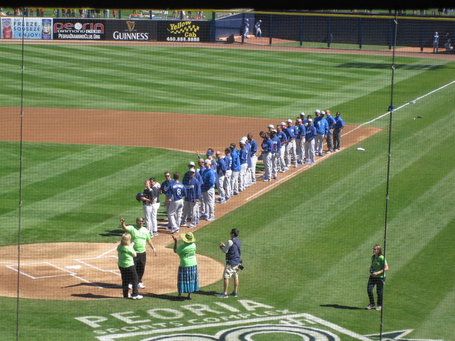 The Dodgers stay home at Camelback Ranch on Sunday as they host the Indians. Beckett gets the start for Los Angeles, while Corey Kluber pitches for Cleveland.