Clayton Kershaw may not want to hear them, but the comparisons to Sandy Koufax are obvious, and deserved.

Two of the greatest pitchers in Dodgers history were on full display on Monday at Dodger Stadium, and the comparison between left-handers Sandy Koufax and Clayton Kershaw is only natural.

"To have Sandy throwing out the first pitch and Clayton throwing the last pitch, it's almost like a passing of the torch moment," said catcher A.J. Ellis. "Two iconic Dodgers lefties lived in the same day, and pitched off the same mound. It was pretty surreal and I was blown away to even be a small part of it."

Kershaw does it all 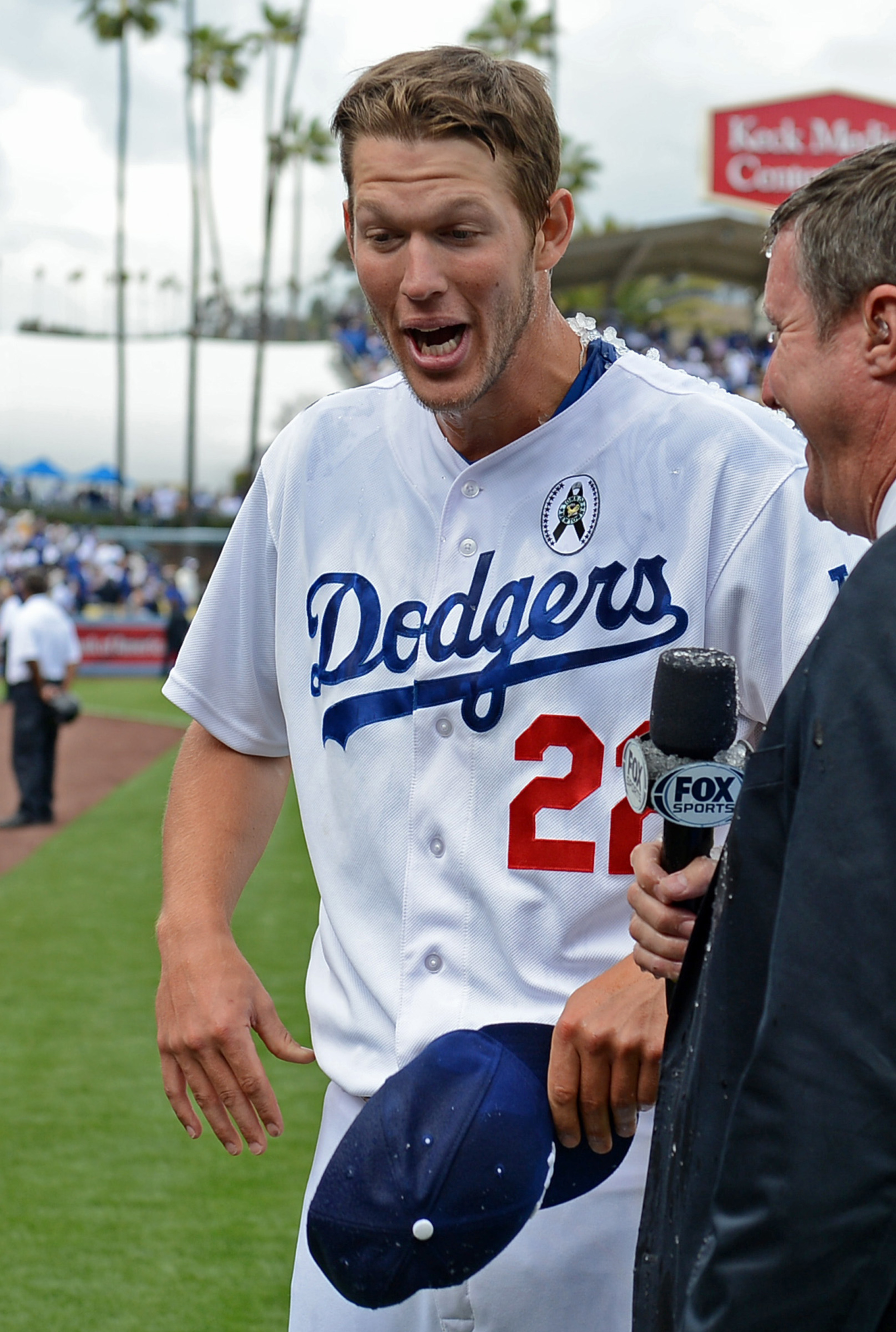 Ellis called for 94 pitches from Kershaw, who pitched his sixth career shutout to beat the Giants. Three of his six shutouts have been against San Francisco. The pitcher was appreciative of his catcher, even if he beat him up on a few pitches.

"A.J. was awesome. I think I hit him in the neck and the face. I only shook him off once all game. That's a testament to him and the work that he does, studying these hitters," Kershaw said. "I felt really confident, and he's a big part of that. He was really awesome today."

Koufax retains a mythic status in Dodgers lore, and rightfully so. His five-year run from 1962-1966 included five ERA titles, three Cy Young Awards, three pennants and two World Series wins. But with Koufax back involved with the team again, now a special adviser to team chairman Mark Walter, Kershaw has grown close to the Hall of Famer.

"Sandy is awesome. I don't think of him is some historic person, just because I get to be around him so much," Kershaw said. "I understand what he means to the Dodgers and as long as he's around the Dodgers will be in good shape."

Yet Kershaw is more reverent when it comes to those who compare him to Koufax.

"I just don't want to disrespect Sandy, he doesn't deserve that. He's the best left-handed pitcher ever, so for somebody to say that is a disrespect to him," Kershaw said. "Obviously I'm honored by the comparison but I don't put any merit to it because I've got a long way to go."

Manager Don Mattingly said more of the same, though he couldn't help get caught up in the excitement of the day and compared Kershaw to Koufax.

"I'd be lying if I say it didn't flash through my mind about the sixth inning," Mattingly said. "This guy was rolling along, and Sandy threw out the first pitch today. It's probably not fair to Clayton to throw that on him."

The comparison, however, is only natural. Kershaw has been simply impeccable in his early career. He already has one Cy Young Award, he has four straight sub-3.00 ERA seasons, and he and Koufax are the only two Dodgers to lead the league in ERA in consecutive seasons.

Hell, even Koufax himself said in spring training 2012 that he was the one who should be flattered by the comparison with Kershaw, not the other way around. "If he’s as good as I think he’s going to be, I’m honored," Koufax said.

But more than that, the style of pitching is similar. Not just the fastball and curve but rather their demeanor on the mound.

"He's as focused a person as I've been around," Ellis said of Kershaw.

There is a story of Koufax before one of the World Series years in the 1970s, maybe 1977 or 1978. Koufax was asked to throw batting practice before one of the games and, even at 42 years old or however old he was more than a decade out of the game, he got in the zone and began mowing Dodgers hitters down. Someone had to tap Koufax on the shoulder, as the story goes, to snap him out of it. The story may be apocryphal but if it isn't true it probably should be.

But that hyper focus is apparent with Kershaw, who though he was pumped up after his home run gave the Dodgers a 1-0 lead in the eighth inning, he wouldn't acknowledge the curtain call because he was focused on getting the final three outs.

"I think he enjoyed (the home run). If you're not getting excited there," Mattingly said. "He was probably telling himself to settle down as much as anything. At that point it was a 1-0 game, and he better start getting it back together and not let the excitement take over."

"That's the thing, you have to switch gears a little bit. Obviously it's really exciting, you have your teammates giving you high fives," Kershaw said. "I wanted to be excited for that, but as soon as I sat down I had to think about how to get three outs."

Kershaw did get those three outs, by the way.

The Dodgers look for a second straight victory on Tuesday night in a battle of southpaws at Dodger Stadium. Hyun-jin Ryu makes his regular season Dodgers debut, facing off with Madison Bumgarner for San Francisco.