The Dodgers had more of the same in their second week, with little offense yet good pitching. But unfortunately the week will also be remembered for losing Zack Greinke for eight weeks to a broken collarbone.

The Dodgers offense continued to flounder in the second week of the season, but they were able to split their six-game road trip thanks to strong pitching. However, the week will forever be remembered as the week the club lost Zack Greinke to a broken collarbone in a brawl with the Padres.

Dodger Batter of the Week: Adrian Gonzalez continued to torment his own team, and carried over his hot streak into Arizona. Gonzalez hit .417/.481/.708 with a pair of home runs. Honorable mention goes to Juan Uribe, who also hit two home runs, in limited duty, including a game-winning shot in San Diego in Thursday night's brawl filled contest.

Dodger Pitcher of the Week: For making a triumphant return to the mound with six strong innings, this award goes to Chad Billingsley in yet another strong week by the starting pitchers. Josh Beckett pitched the best game of the week, on Sunday in Arizona, but got hung with the loss, and he also pitched the worst game of the week on Tuesday in San Diego. 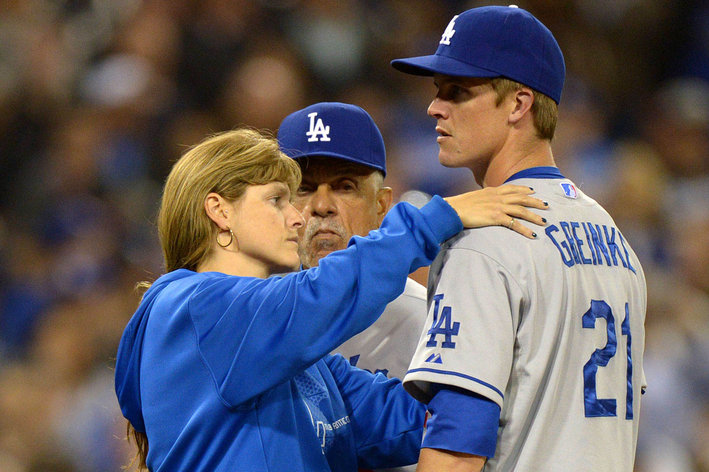 Upcoming Week: The Dodgers run the Terry Kennedy gauntlet, starting at home to settle a score with the Padres, then to Baltimore to face the Orioles in their first interleague series of the year.