Miracle Men: Q&A with Josh Suchon on his account of the 1988 Dodgers

Suchon will be signing copies of his book on Wednesday night at Dodger Stadium.

Share All sharing options for: Miracle Men: Q&A with Josh Suchon on his account of the 1988 Dodgers

Former DodgerTalk co-host and current Triple-A Albuquerque Isotopes play-by-play announcer Josh Suchon wrote a book about the World Series winning 1988 Dodgers. Miracle Men: Hershiser, Gibson and the Improbable 1988 Dodgers is a fantastic and thorough account of the 1988 team, written in an easily readable fashion by Suchon.

I am admittedly biased about the 1988 Dodgers, the favorite team of my youth. I would read anything about that team. But given the amount of research I did during the offseason about the team for 39 individual profiles and weekly reviews about that season, I have reasonably high standards about any content written about the 1988 squad.

Suchon easily meets and exceeds those expectations. I highly recommend the book. Whether you already own a copy or would like to buy the book, Suchon will be signing copies of Miracle Men on Wednesday at Dodger Stadium, in the right field team store on the field level. Suchon will have a reading from the book and sign copies through the third inning of the game against the Nationals.

Suchon was kind enough to answer questions about Miracle Men, which again, I highly recommend. His answers are in italics below, following my questions in bold.

Aside from your work with the Dodgers, you grew up an A's fan. Can you describe how that gave you a unique perspective for this book?

Hopefully, it gives me somewhat of an outsiders perspective on that season. I didn't live and die with every pitch of that team. I didn't want the book to be a love letter to that team. It couldn't be a love letter anyway because that team broke my heart in 1988. I was able to approach the book with a, hopefully, objective perspective. What struck me the most is that when I told people I'm writing a book about that team, they remember Kirk Gibson's home run. They remember that Orel Hershiser pitched amazing. But the rest of the season is somewhat a blur because those two memories are so strong. It was a quest to answer the question, "how did they do it?" It wasn't just Gibson and Hershiser. Well, it was mostly those two. But I wanted to find the stories that people didn't know, or forgot, plus add to the stories they remember.

How many people did you interview for this book?

I'm not sure the exact number. It was over 30. Almost everybody on the team, all the stars and key players, plus broadcasters like Scully and Jarrin, some PR people and writers. Most of the conversations were media people were more informal. I wanted the players and the archives to help me tell the story. I wanted it to be a time capsule to 1988, since the game was played and described so differently. Originally, I had this idea of interviewing hundreds of fans who were at Game 1 of the World Series, but then I was concerned it would get repetitive. Then I lucked into finding a dad and his son who attended the game. The dad stayed. The son left early and missed it. I realized this one family tells the story of the 56,000 people, or however many were there. It saved what's already an incredibly long chapter from being too long … and it saved me some time, which was needed, because I was up against the clock. 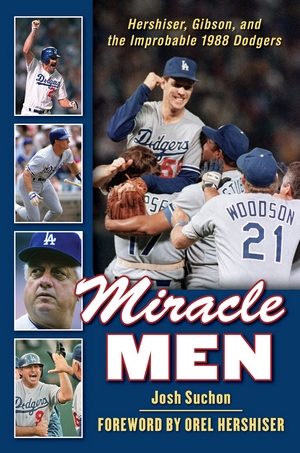 While the indelible image of the 1988 Los Angeles Dodgers season is Kirk Gibson fist-pumping his way through a slow limp around the bases to make official his improbable/impossible home run in his only appearance of the World Series, Josh Suchon in his book Miracle Men makes sure to remind us how big a role Orel Hershiser and a cast of Stunt Men also played to make that championship season a reality.

In what is mostly a chronological retelling of the last World Series Championship team to reside in Chavez Ravine, Suchon wisely chooses to spend individual chapters dwelling on each of the six shutouts Hershiser pitches in his 59 inning scoreless streak to cap the season. These chapters are equally spaced through Suchon’s regular season framework, providing the weight-bearing pillars for his book, much like so much of the season because borne by Hershiser’s shoulders, or at least his right one.

As the story of Spring Training and the 162 games that followed is woven among Hershiser’s shutouts, Suchon draws upon historical quotes and accounts as well as new interviews with many of the principals to set the stage and recreate the mood that led up to the magical postseason that was to follow.

As I am someone who lived through that season as a fan, I found this book helped rekindle, reinforce and supplement my own memories of the events of that year as the stories are told smoothly, one blending into the other. For those that are well-versed in those stories and for those who consider 1988 ancient history, Miracle Men provides accounts that keep the reader engaged even as s/he knows how the ending turns out, sprinkling in a few surprises along the way.

While Tommy Lasorda stories are mythical and multitudinous, a couple tales new to me do crop up in Miracle Men. For example:

Sax and Lasorda. They’d go to war against each other in the afternoon and do anything they could to win a game together at night.

"We treated Tommy like one of our teammates," Sax recalled. "We did shit to Tommy that we can’t tell you about. We used to strip him naked in the clubhouse and scribble on his nuts. But you know what, did the players play like hell for him, or what? We loved him. We’d do anything for Tommy."

Ultimately, Miracle Men is an enjoyable summer read and a fine companion for our favorite summer pastime of baseball.

A final note that is a bit more True Blue LA specific: our beloved commenter and LA Galaxy blogger for SB Nation Josie Becker has a paragraph on page 263 deservedly devoted to her and her efforts.

From start to finish how long did this book take to write?

It was pretty quick. I signed the contract with Triumph Books in early June. They wanted it done on Sept. 1 and I hit the deadline, so it was less than three months for about 95 percent of the book. I made a few changes in the final editing of the book, but nothing major. I didn't do much for three months. It was all interviews, transcribing, writing, some food, some yoga for my sanity and to clear my mind, and a little sleep. It's a strange feeling to have people giving me feedback about the book now because I finished it so long ago. Even though I left the newspaper business in early 2007, I still consider myself a journalist at heart. After 10 years of writing two stories every day and getting the instant gratification of seeing your work in print, it's so bizarre to write over 125,000 words and not see the final product until six months later.

You had a pretty good grasp of that Dodgers team already, but was there any particular story or moment that you learned of that surprised you?

The former newspaper beat writer in me loves finding the little nuggets in the details. I was hoping to find those nuggets. I'd forgotten that Tim Belcher couldn't throw a strike in the minors with the Athletics, and that's essentially why they were willing to trade him for Rick Honeycutt. Then amazingly, he becomes a strike-throwing machine in 1988. Learning that Orel Hershiser wasn't originally named the MVP of the World Series was fascinating, and a little heartbreaking for the guy who was told he was MVP. (You'll have to read the book to find out who it was.) Hearing Tim Leary describe how he taught himself the split-finger after reading an article about Roger Craig in Sports Illustrated, and then resurrecting his career while driving to Mexico for Winter Ball was very cool. Then there's all the rip jobs in the newspapers from that season. I've never been a big believe in bulletin-board material inspiring a team, but dang, that year makes me re-think that opinion.

Your "Grab a bat" interaction with Orel Hershiser is pretty legendary. Would teenage Josh Suchon have believed he'd one day become friends with Hershiser?

Great question. I've never thought about that. The short answer is heck no. Even as a teen-ager, I always knew that I wanted to work in sports in some capacity. I didn't know if it would be as a writer or broadcaster or working for a team. I was a pretty obsessive autograph collector in those days. But for whatever reason, it never dawned on me that the players who I asked for autographs would become my colleagues later in life. I should add, it's not like like Orel and I are bff's who talk all the time now. I have a ton of respect for Orel. I hope the feeling is mutual. I wanted this book to give people a new perspective on what he accomplished that year, and the price he was willing to pay for it. I think my history with Hershiser sums up what it's like being a dumb kid, then growing up and viewing sports from a much different lens.

Is there anything in the book you wish you had included but didn't?

Yeah, I probably short changed the entire bullpen and its impact. I probably needed more on Brian Holton, Tim Crews, and Alejandro Pena. I never tracked down Jay Howell. Hopefully, I was still able to accurately convey what that season was like for howell -- going from an all-star with the A's in 1987 who was booed by his own fans at that game, to having elbow surgery and getting traded, going to a new team, facing his demons in the Bay Area, dealing with the pine tar fallout, getting ripped by Don Baylor, giving up the game-winning home run in Game 3, and then recording a mind boggling seven-out save in Game 4 with a one-run lead. If Howell doesn't save Game 4, I'm convinced the Athletics win that series. I probably should have done a better tribute to Crews and Mike Sharperson too.

Did you have a favorite interview for this book?

Not sure how to pick one. I'd say a three-way tie for first, listed alphabetically, between Tim Belcher, Fred Claire and Steve Sax. Fred was incredibly candid. I hope he doesn't regret being so candid. Fred was under a lot of heat that year, but he was the architect of that team. All his moves weren't perfect, yet they worked. He deserves a lot of respect and praise. It seemed like Belcher enjoyed talking about that team and revisiting that season as much as I enjoyed asking him questions about it. Even something as simple as Tim remembering eating lunch with Orel the day of the 59 scoreless, and not wanting to mention the streak, and then inadvertently passing him a USA Today sports section with a huge photo/story of Hershiser and Drysdale on the cover. And then with Sax, his energy is so contagious, even from a cell phone. I felt like sprinting to the top of Griffith Park when I was done talking to him.