Today we're going to talk about baseball! It's always fun to talk about baseball, and history, so once again I'm combining them as we break down a 1946 promotional film for the old Pacific Coast League [embedding is disabled for some reason]. Now, the PCL has never suspended operations (so far as I know) so the league that we currently send Dodger prospects to is the continuity for the league that was once the pride of the West Coast. Oh and the promotional film would like me to remind you the PCL uses the Wilson baseball exclusively. 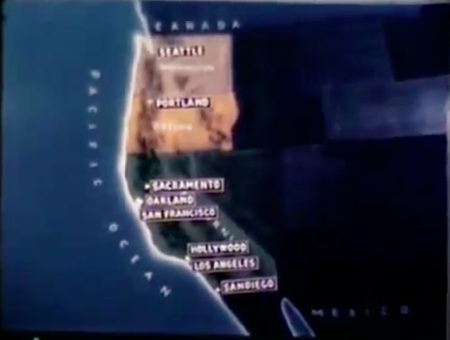 Here's a map of the PCL's territory in 1946. The video brags about how much further San Diego is from Seattle than Boston is from Chicago (some 900 miles). Certainly it was a bigger challenge (read cost) to keep the PCL afloat in the days before plane travel was ubiquitous. It also meant more time spent on road trips. Luckily things did break down into groups somewhat.

This iteration of the Portland Beavers lasted until 1972, the Sacramento Solons were sold in 1960 when they were moved to Hawaii to become the Islanders. The Oaks were sold to a Vancouver group in 1955 to become the Vancouver Mounties.

However the rest of those cities stayed active up until the day major league baseball arrived. The Rainiers lasted until 1968 when the Seattle Pilots were added to the American League. San Diego was also a part of that expansion year, gaining a major league version of the San Diego Padres. The San Francisco Seal, Hollywood Stars, and Los Angeles Angels all played their last games when the Dodgers and Giants moved west from New York. The Angels moved to Spokane while the Stars moved to Salt Lake.

This is just given as backdrop as in 1946 these towns did not know that they would be home to both of New York's National League franchises, or that the ends of the PCL territory would be involved in 1968 expansion. Nor did they know that the move West would also cause expansion in 1962, or that a team from Kansas City would move to Oakland just before 1968 expansion.

No, in 1946 the PCL thought it was good enough and viable enough to petition as a major league in its own right. The major leagues recognized this, but thought colonization would be much more fun.

Indeed, the reason this promotional film was create in 1946 was because in 1946 the PCL declared their intent to become a major league. They would be granted an "open" status from 1952-57 placing them above Triple A but not as a full major league.

At the time, the territory the PCL claimed had 15 million people. The first of these people introduced in the film is San Francisco Seals manager Lefty O'Doul and yes the DiMaggio boys (all three of them) are name dropped right away. Next Robert Owen of Portland. Casey Stengel manager of Oakland after stints with the Boston Braves and the Brooklyn Bums (hehe) back east.

Bill Sweeney is manager of Los Angeles. The Angels are wearing the interlocking LA on the jersey, but a side by side LA on the caps. 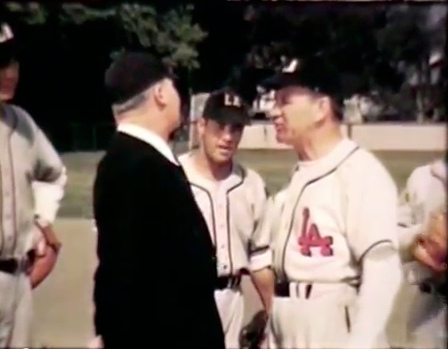 Peper Martin is managing for San Diego, with a Cardinals '31 World Series on his resume. Buck Fawcet is managing Hollywood, with an H inside a star on the jersey and an H on the caps. Bill Skiff in managing at Seattle, a former New York Yankees catcher. Earl Shelley is managing at Sacramento, strange caps there with white piping along the stitching of a dark blue cap.

The footage is taken from Spring Training, as this was a promo video before the 1946 season. The video gives us all the Spring Training homes of the PCL: Hollywood training in Ontario; Portland training in San Jose; Sacramento training in Richardson Springs (Butte County near Chico); Los Angels in Fullerton; San Diego in El Centro; Seattle in San Fernando; Oakland in Boyes Springs. Having all the teams train in California certainly brought down travel costs....

Excpet for goodness knows what reason, San Francisco trained in Honolulu. They got there by clipper (the new plane travel technology where large boats could land on water). For the life of me I can't figure out the executive decision there. The players were greeted with a parade into the city and a ceremony in front of city hall with leis and the key to the city. These were admired ballplayers. The stadium they played in was quite spacious.

One of the striking things about all this spring training footage is that the teams all had stadiums in the spring training site. The small ballpark in Ontario where Hollywood trained in nestled in between two power line towers. We're taken through a number of exercises run by all the different clubs, sprints and ball drills and the like. When we get to see LA's facility in Fullerton, there's a busy neighborhood street on one side and small woods on the other

Pitchers are showing throwing a ball through a cloth rectangle, representing the strike zone. We've got the height of technology in the PCL.

"Spring training is not easy on veterans, who find it tough to take off weight". That's just a gem right there. The leagues attendance the previous year (just over three million) in saying why the PCL has to work so hard in spring training. The league needs great teams so attendance can stay up. With a stated population of 15 million in the territory, that's about one in five on the west coast who went to a PCL game at some point in 1945.

The next segment is dedicated to getting to know the players in the league. Some of them are former major leaguers, some are rookies looking for their first break. A lot of these players are returning from serving in World War II, and their branch of the armed forces is mentioned.

We get some great footage of Seals players taking canoes into the ocean in Waikiki, with Diamondhead in the background.

The film wraps by mentioning the stadiums which have expanded for the upcoming season. Oakland, Sacramento, and LA had all added seats to meet demand. This was a league on the verge of something big. Indeed the territory would become something big, but it would be a different league that would get to fully till the land.