The Dodgers will giveaway the Sutton bobblehead before the game against the Braves on Thursday, June 6, the first Dodgers bobblehead for the Hall of Fame pitcher. 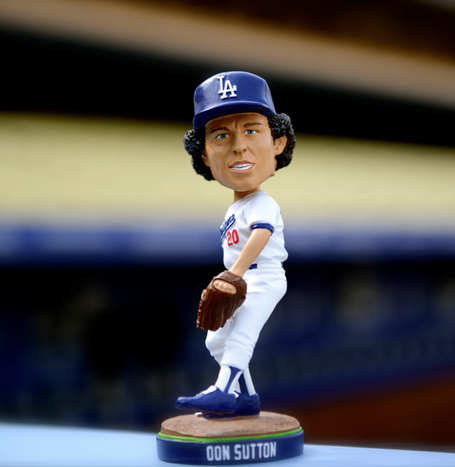 The likeness is pretty good, though the hair seems darker than Sutton's actual hair color when he played for the Dodgers. Sutton pitched for the Dodgers from 1966-1980, then again in 1988, and is the franchise all-time leader in:

Sutton wasn't just a compiler, as he finished in the top five for Cy Young Award balloting five straight seasons (1972-1976) and made four All-Star teams. Sutton started opening day for the Dodgers for seven consecutive years (1972-1978), and his seven opening day starts are tied with Don Drysdale for the most in Dodgers franchise history.