The International Champions Cup doubleheader on Aug. 3 will mark the first ever soccer games at Dodger Stadium, which opened in 1962.

Dodger Stadium will host its first ever soccer matches on Saturday, Aug. 3, when the LA Galaxy will be one of four teams in the Guinness International Champions Cup. The teams involved are Everton from the Premier League, Juventus from Italian Serie A, and Real Madrid.

"We are excited to host our first professional soccer games and four world class teams," Dodgers president Stan Kasten said in a statement. "This will be a very special event for Southern California sports fans as we get the opportunity to see some of the world's greatest soccer stars perform at Dodger Stadium." 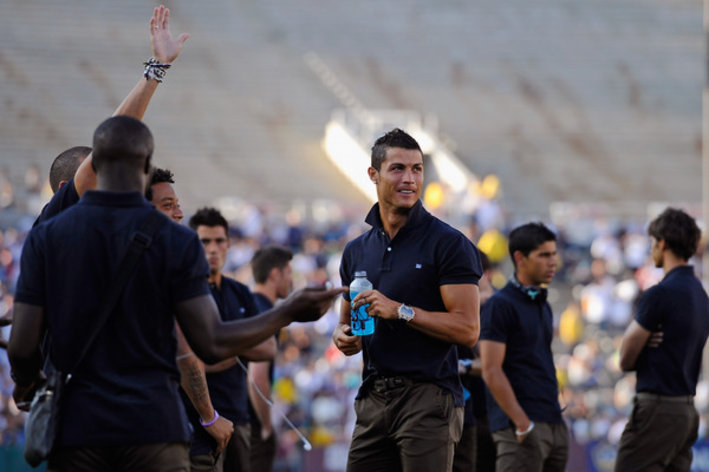 Head over to LAG Confidential for the Galaxy schedule of friendlies.

While the doubleheader is being played at Dodger Stadium, the Dodgers will be in Chicago battling the Cubs in a weekend series at Wrigley Field.

The four soccer teams comprise the west region of the international Champions Cup, which begins with Everton facing Juventus at AT&T Park in San Francisco on July 31. The Galaxy will face Real Madrid at the University of Phoenix Stadium in Glendale, Ariz. on Aug. 1.

On Aug. 3 at Dodger Stadium, Real Madrid will face either Everton or Juventus at 5 p.m. PT, followed by the Galaxy facing the other team at 7:30 p.m. PT.

“After having played in many of Southern California’s legendary venues, the Galaxy are thrilled to be able to take part in the first-ever soccer games to be played at Dodger Stadium, one of the more scenic and storied sports venues in the world,” LA Galaxy president Chris Klein said in a statement.

This is the second new sport brought to Dodger Stadium by the new ownership group. Earlier in May it was announced that the Kings and Ducks will play the first outdoor hockey game at Dodger Stadium on Jan. 25.