Greinke had surgery to repair his broken left collarbone on Apr. 13 in Los Angeles, and is ahead of his original pace to return to the Dodgers by June 8.

Amid all the Dodgers dropping like flies in the past week or so, Saturday offered a bit of good news on the injury front. Starting pitcher Zack Greinke threw his first full bullpen session before Saturday's game against the Giants, 21 days after having surgery to repair his broken left collarbone.

The Dodgers tweeted a series of pictures from Thursday, when Greinke threw lightly at Dodger Stadium: 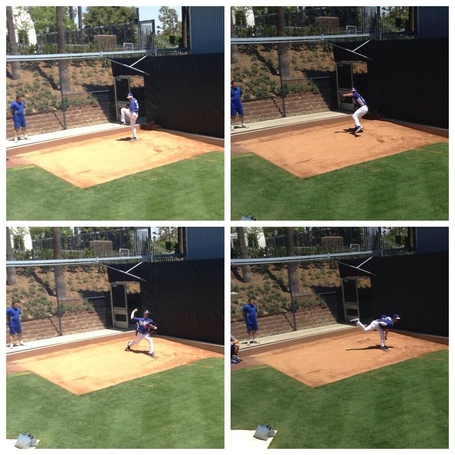 The original diagnosis after the surgery was for Greinke to return to pitching for the Dodgers in eight weeks after the Apr. 13 procedure, which would put him in line for a return around June 8. But given that Greinke is already throwing bullpen sessions, his return could come sooner than that.

Ken Gurnick of MLB.com spoke to Greinke after the bullpen session and has similarly encouraging news:

Greinke threw all of his pitches and said he had no discomfort. Original recovery estimate was eight weeks, but he's ahead of that.

Coupled with Carl Crawford and Adrian Gonzalez returning to the starting lineup on Saturday, even if Gonzalez was walking around the clubhouse in a neck brace, not everything is bad news in Dodger land.