Angel Sanchez, signed in 2010 out of the Dominican Republic, was ranked the 36th best prospect in the Dodgers' system by Brandon Lennox prior to the 2013 season.

Minor league player of the day: Angel Sanchez took a no-hitter into the seventh inning for the Class-A Great Lakes Loons on Monday, but settled for seven scoreless innings with eight strikeouts in a no-decision. Sanchez, 23, retired the first 10 batters of the game before walking outfielder Michael Reed with one out in the fourth inning. It was Reed who broke up the no-hitter with a double to leadoff the seventh inning, but Sanchez retired his final three batters faced, including two by strikeout. 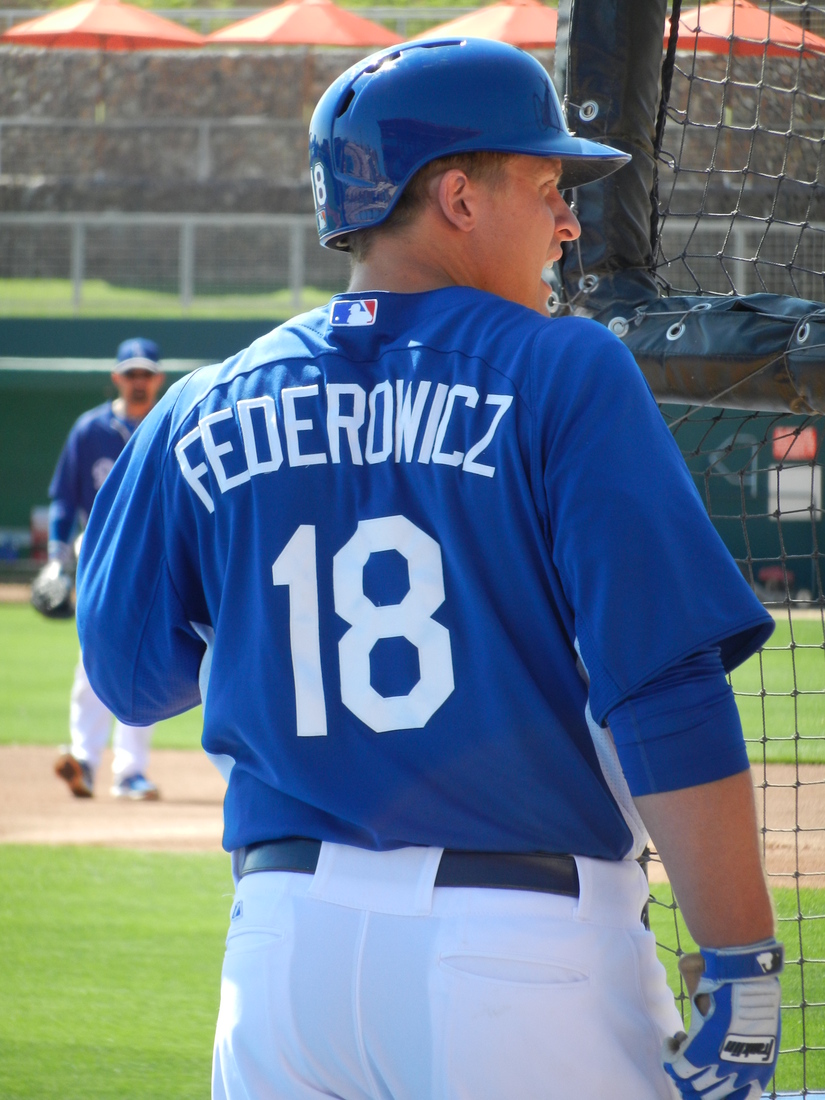 Isotopes catcher Tim Federowicz on Monday was named the Pacific Coast League Player of the Week after hitting .571 (12-for-21) with three home runs, three doubles and a triple in six games for the week ending Sunday, May 5. Federowicz also drove in 10 runs during the week.

AAA: The Isotopes, down 8-4 in the bottom of the ninth, rallied for four runs, with the tying run coming on a bases loaded hit by pitch to Scott Van Slyke. But the New Orleans Zephyrs (Marlins) ultimately prevailed 9-8 in 11 innings on an RBI double by Matt Downs. Tim Federowicz homered to start that ninth inning rally, his fourth hit and second home run of the game. Federowicz, who also doubled on Monday, is hitting a mere .531/.561/1.082 with seven home runs, four doubles, and 20 RBI in 13 games in Triple-A. Tony Gwynn Jr. went 2-for-6 and scored two runs from the leadoff spot. Nick Buss went 2-for-4, drove in two, and scored once. Aaron Laffey, signed to a minor league deal last week, made his first start for the Isotopes. He was staked to a 3-1 lead after the first frame, but Laffey could get out of the fifth inning, allowing four runs in 4⅔ innings. Chris Withrow got himself into a bases loaded jam with one out in the ninth but got out of it with no runs scoring, preserving his 0.00 ERA on the season. Withrow has allowed four unearned runs and seven walks in his 11⅓ innings, but he also has 15 strikeouts.

AA: The Lookouts were off on Monday

HiA: O`Koyea Dickson hit a two-run home run but it wasn't enough for the Quakes, who were 6-5 losers on the road in San Jose (Giants). Dickson went 1-for-3 with a walk and scored twice. Rancho Cucamonga only had five hits on the day, and the other four came two each from 26-year-old Ryan Mount and 24-year-old open tryout signee Robbie Garvey. Jarret Martin allowed five runs (four earned) on six hits and four walks in his five innings, though he did strikeout six. Infielder-turned-pitcher Pedro Baez allowed the deciding run in the seventh inning, his only inning of work, to suffer his first professional defeat on the mound.

LoA: Sanchez was brilliant on the mound, but Great Lakes lost 3-1 to the Wisconsin Timber Rattlers (Brewers). All the scoring came in the eighth inning, as Wisconsin broke a scoreless tie off reliever Jonathan Martinez with three runs. The only run for Great Lakes came on an eighth-inning sacrifice by shortstop Jesmuel Valentin, who was also 1-for-2 with a double. Catcher Tyler Ogle was 1-for-2 with two walks in the loss.

"[Sanchez] was outstanding," Loons manager Razor Shines told MiLB.com. "You throw seven innings of one-hit baseball, you can't do things any better. In my opinion, he obviously deserved a better result than the one that he got."

Transactions: The Loons on Monday placed second baseman / outfielder Malcolm Holland on the seven-day disabled list, and promoted infielder Kevin Taylor from extended spring training in Arizona. There will be another transaction coming Tuesday, with someone likely coming from Albuquerque to replace the disabled-list-bound Jerry Hairston.

Coming up: The Loons are off, but the other three teams are in action. Triple-A Albuquerque sends Sean White to the mound Tuesday night to open a seven-game road trip in Tucson (Padres). Double-A Chattanooga hosts Mobile (Diamondbacks), and Class-A Rancho Cucamonga returns home to host Inland Empire (Angels), with Duke Von Schamann likely starting for the Quakes on Tuesday night.