Six people were ejected for involvement in the brawl between the Dodgers and Diamondbacks on Tuesday night, and suspensions figure to be on the way.

Two months to the day of their last bench clearing brawl in San Diego, the Dodgers and Zack Greinke were smack dab in the middle of another melee on Tuesday night, this time with the Diamondbacks. Suspensions and/or fines are surely forthcoming, but it's hard to know just how severe the punishment will be.

What we know is that Zack Greinke hit Miguel Montero in the back, clearly in retaliation for Yasiel Puig getting hit in the face one inning earlier. Greinke wasn't ejected for his hit by pitch, and in fact seemed to find the entire situation amusing (especially if it looks like he's winking here): 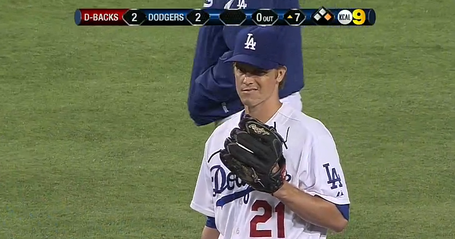 Kennedy and Gibson were ejected immediately when Kennedy hit Greinke in the shoulder.

It seems obvious Kennedy will get suspended, if only for throwing near Greinke's head, but probably the starting pitcher standard of six games.

Ward got ejected, but appeared to take the bulk of the punishment as he was slammed into the railing by Dodgers' reliever J.P. Howell.

J.P. Howell said he had no idea who Turner Ward, his victim, was: "It could've been my best friend. I wouldn't have known."

Howell can be seen on the bottom, in a jacket here, going after Ward (No. 15)

Belisario, also in a jacket on the left in the GIF above, was heavily active in the fracas.

6 ejections as result of brawl, including #belisario, who says, ``I was out of my mind just trying to protect my teammates.'' #dodgers

Also in that GIF, Puig can be seen appearing to throw a punch at Eric Hinske (No. 22), and also around the 5:38 mark of the MLB.com video. 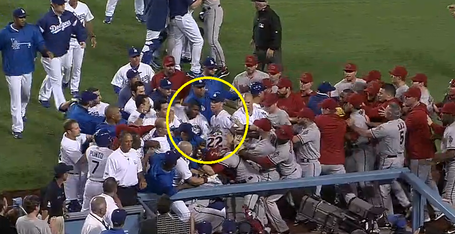 This video of my dad throwing down Alan Trammell like a rag doll gets me so hype!!!!i.imgur.com/Iqa0DRE.gif

The Dodgers won the brawl game on Apr. 11 in San Diego, but have gone only 22-33 since, including Tuesday's win.

But for those expecting suspensions or fines to come quickly (they were handed out the next day after the San Diego brawl), that might not happen, as MLB exec Joe Torre, who is in charge of discipline, is on vacation, per J.P. Hoornstra of the LA Daily News.