In 1957, Walter O'Malley purchased a minor league stadium and team in Los Angeles with the intent of moving his Brooklyn Dodgers there. So what exactly did he purchase?

The centerpiece of my Dodger history series thus far has been unraveling the moment when Walter O'Malley purchases the Los Angeles Angels from Phil Wrigley. We've covered the development of the Elysian Park area up to it's purchase by the City of Los Angeles. We've looked at how the Pacific Coast League was courting Major League Baseball. We've looked at one of the unsung heroes in getting O'Malley to consider moving to Los Angeles. We've also looked at the freeway project around Elysian Park which made the land desirable to O'Malley.

So we know what Los Angeles had and why O'Malley wanted it. So what did O'Malley have to trade? When he purchased the Los Angeles Angels, what exactly did he get? 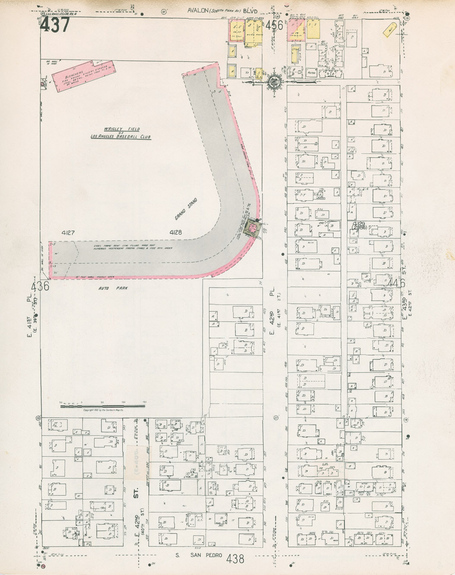 One of my favorite things about the Los Angeles Angels of the PCL is that Angels always remained an unofficial nickname. On everything official, even on scorecards, they're referred to as Los Angeles Baseball Club. The grandstand of Wrigley Field faced northwest, with right field along Avalon and left field along 41st place. In the old Home Run Derby TV show, filmed at Wrigley Field, folk would fit on top of their roofs on 41st place and watch Major League baseball players participate. 41st place is all residential, with Harmony Baptist Church at the intersection with San Pedro. 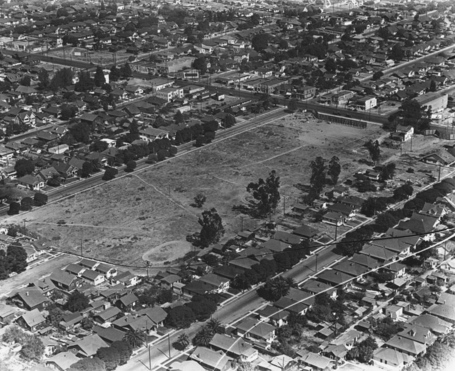 That's a picture of the plot of land before Wrigley Field was built on it. Talk about nestled into a neighborhood. The lot isn't empty by accident. You can see in the map above, more homes along 42nd Place will be bulldozed. Half the lot will become an auto park, with the 21,000 seat stadium built on the other half.

I'm going to try my best to interpret the small print on the map of Wrigley Field, but there aren't enough pixels for me to be 100% accurate. On the grandstand is written: steel frame, something floors, wood roof. Numerous independent something. I can see the outside had a tile wall motif. The bleachers are fireproof with steel beams. That green and pink square is the clock tower 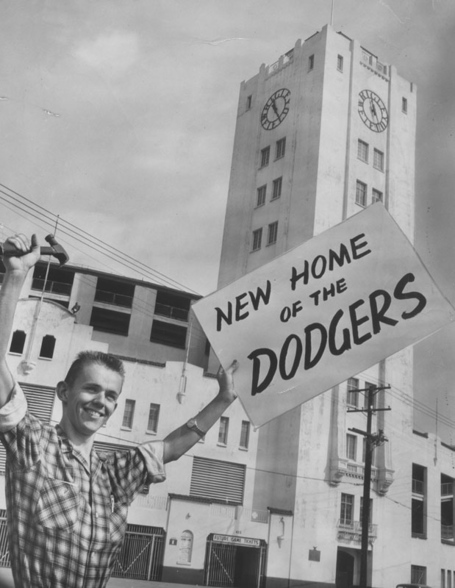 That's what it looks like from the outside, and our young fan friend holds up a hopeful sign. Yes, when O'Malley purchased the stadium and team from Wrigley many thought he would move his Dodgers into an improved version of the south central Los Angeles ballpark. There was even a model made up. 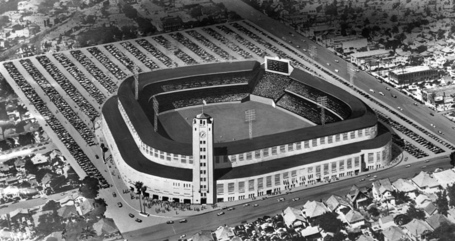 Walter O'Malley purchased the Angels and Wrigley Field from Phil Wrigley for $3,000,000. William Wrigley Jr. had purchased them for $150,000 back in 1921, so that was quite a turnaround for the Wrigley family trust. With that much money spent, it's easy to see why early reports had the Dodgers playing in the stadium they purchased. However, that bounty was paid solely for the potential Los Angeles had. You can see San Pedro St. in the background.

Expansion would have accommodated more cars, but nothing near all the lots Dodger Stadium would eventually have. There would have been freeway access from the Harbor freeway, but it wouldn't have been a dedicated exit, and other freeway traffic would all have to merge onto the Harbor. It would have been a traffic nightmare, not unlike the nightmare the Coliseum is today.

So that covers the stadium. Wrigley would trade it to the city for the Elysian Park land, and today it's home to a park and a hospital. As an outsider, I imagine the residents prefer a few soccer fields and a baseball diamond to a Major League Baseball stadium, and no additional homes had to be bulldozed (in that neighborhood).

Now onto the team. The Pacific Coast League's open classification meant players weren't tied to their parent club; contracts could be sold to any team. It means the Angels were free to build their own roster. With the Dodgers as owners in 1957, the Angels sold Steve Bilko to the Reds. Bilko won the PCL triple crown in 1956 with a .360 batting average, 55 home runs, and 164 RBIs. The American League LA Angels would eventually break a MLB home run record for an expansion team playing in Wrigley Field (which was owned by the city at that time), so the ballpark certainly helped.

The Dodgers also moved some of their minor league players to the Angels. Sparky Anderson was on the 1957 Angels, and remained in the Dodger system after the Angels were moved. He was traded in December of 1958 for Jim Golden, Rip Repulski, and Gene Snyder of the Phillies. That 1959 season would be the only time Anderson would see the major leagues. He'd later making the National Baseball Hall of Fame as the manager of the 1970s Reds and 1980s Tigers.

There was also a player in the Dodger system named Tom Lasorda. He pitched in the Dodger system for years including a year with the Los Angeles Angels in 1957. He had seven wins and ten loses and an era of .412. For two years in the 50s Lasorda pitched for Brooklyn, but by the time the Dodgers purchased the Angels and moved the team out west the minors were his place his last year being 1960 with Montreal.

Thomas Charles Lasorda would eventually make the National Baseball Hall of Fame as a manager.

The Dodger's interlocking LA, inherited from the PCL Angels, remains the last remaining connection to the club and stadium that Walter O'Malley purchased in 1957. .