The Dodgers' $42 million Cuban sensation was 2-for-4 in his major league debut on Monday, but the most memorable moment of the game was the last play.

Share All sharing options for: Yasiel Puig & The Throw

It feels like spring training all over again. Most of the postgame talk after Monday night's game, a 2-1 Dodgers win over the Padres, was of something amazing Yasiel Puig did, and like the Cactus League Puig is hitting .500.

But the standout play of Monday's win, in Puig's major league debut, was simply The Throw.

Up 2-1 with Chris Denorfia on first base with one out in the ninth inning, Kyle Blanks drove a ball off Brandon League to the warning track in right field. Puig not only tracked the ball down, but then threw an absolute seed, on the fly, to a waiting Adrian Gonzalez at first base to double off Denorfia for the final out of the game.

"With all the hype, it's really just amazing that it ends like that," said manager Don Mattingly. "That was fun."

Puig sort of downplayed the throw, though he did pause to watch a replay of it on a monitor above his head in the clubhouse while talking to reporters after the game.

"I'm just trying to do little things on the field to help the team win," Puig said.

But there was nothing little about that.

Starting pitcher Stephen Fife, a man who makes a living with his arm, was asked if he could make the throw that Puig made, and Fife just started laughing.

"Not with that much velocity," he said, smiling. "That was impressive."

Even catcher A.J. Ellis, sidelined on the disabled list, chimed in:

Know I'm on DL with oblique strain but that Puig throw made my arm hurt. I'll see doc tomorrow. What a debut

First base umpire Laz Diaz had to confer with home plate umpire Mark Wegner, and it was Wegner who ultimately made the out call.

"The shifting and all the stuff they have to do with a play like that, they were looking at each other to see who was going to make the call," said first baseman Adrian Gonzalez. "Mark had the best call, or the best look at it."

Mattingly joked, "I didn't know who was calling it."

Lyle Spencer of MLB.com followed up with the perfect question, "Do you think they had a hard time believing it?" 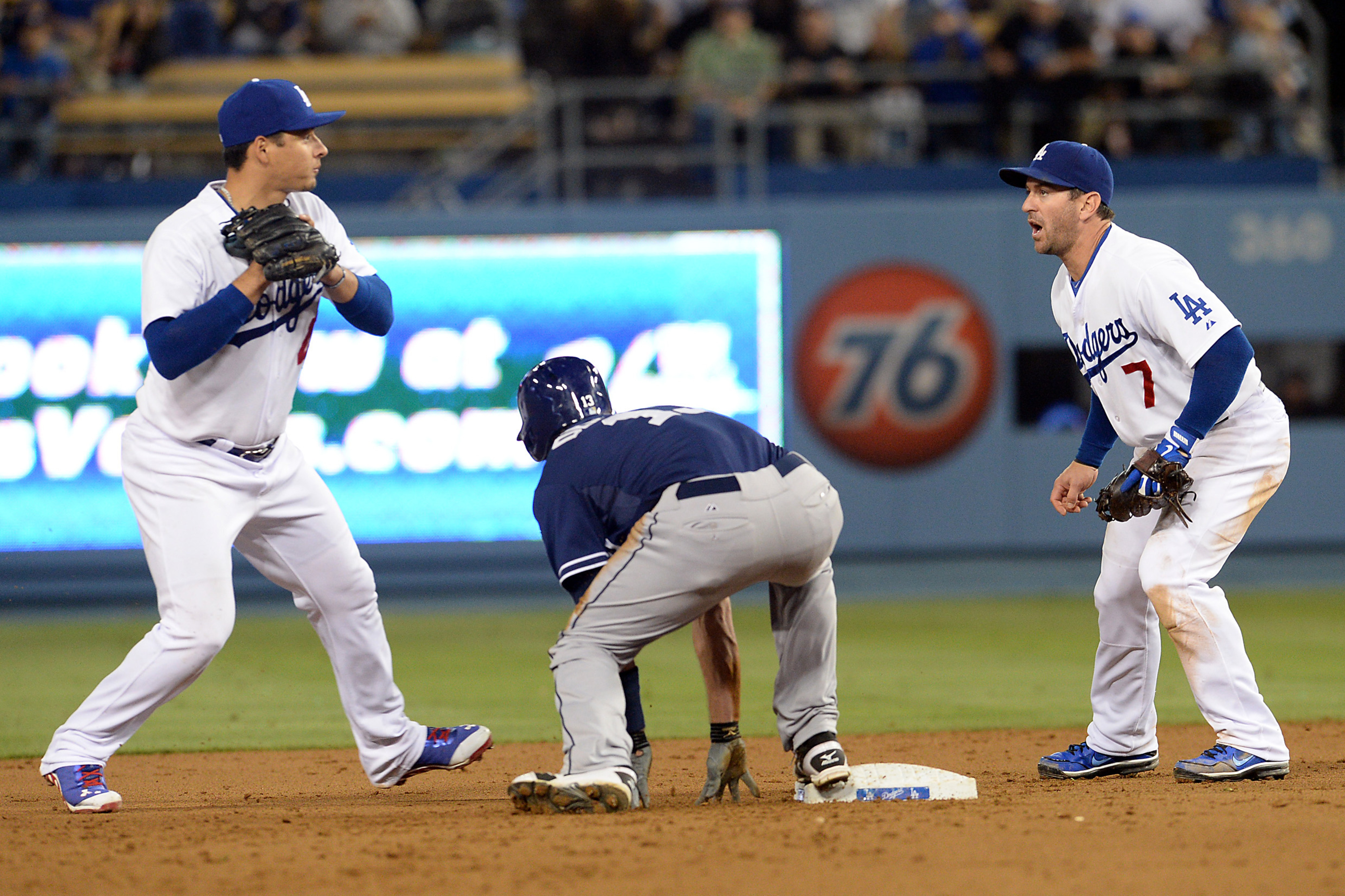 Without this fake by Cruz & Punto, Denorfia wouldn't have been doubled off first base. Photo: USA Today Sports

These are the kind of questions of wonderment that Puig inspires. But he wasn't alone on The Throw.

Shortstop Luis Cruz and second baseman Nick Punto executed a perfect fake on Denorfia, making him slide into second base, thinking there was a play on him.

"I saw Denorfia was stuck at second base because he slid," Gonzalez said. "The biggest part of that play is the guys up the middle faking him out. If they don't do that, he's standing back at first base."

But what people remember is The Throw. Mattingly was asked if he saw Puig make a throw like that before.

Puig is the Dodgers' Paul Bunyan.

"It's hard for you not to feel that energy. It's so powerful. The crowd got excited when he grounded out to third," Mattingly said. "It's a good start. Obviously good energy. He's going to bring that. It was nice, a good ending."