Old timers day should be here to stay

The tradition of old timers day is too important too ignore, and should be an annual event at Dodger Stadium.

Share All sharing options for: Old timers day should be here to stay

And it was awesome.

The Dodgers brought back not only players from the 1963 team - Sandy Koufax, Tommy Davis, Maury Wills, Pete Richert, Dick Tracewski, and Ron Fairly were on hand from the team that swept the Yankees in the World Series 50 years ago - but several players from the 1970s and 1980s as well. 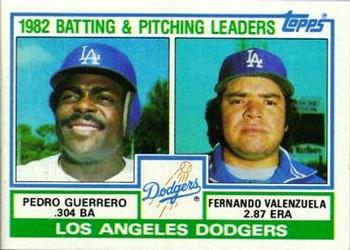 The 1980s were my wheelhouse, which meant this was the first real old timers day that brought back memories of my youth. Seeing Pedro Guerrero, Fernando Valenzuela, Darryl Strawberry, Dwight Gooden and Rickey Henderson out there, among many others, was quite a treat. It didn't even matter to me that Pedro Guerrero, the player I was most looking forward to seeing, struck out.

I started being cognizant of baseball and the Dodgers around 1984, and 1985 was my first full season following the team intently on a day-to-day basis. Guerrero and Valenzuela were the stars, and could do no wrong. Valenzuela opened the campaign in 1985 with a record 41⅓ innings without an earned run to start a season, and Guerrero tied a record with 15 home runs in June. It was a magical season.

That 1983 Topps card is perfect since it shows both players, the 1980s Dodgers icons, on the same card. I felt bad that the two stars I grew up with played such a little part in the team of my youth, the 1988 Dodgers. Guerrero was traded in August, and Valenzuela was hurt and forced to watch from the sidelines.

Valenzuela has been a fixture at Dodger Stadium for years, as he currently is on the Spanish language radio team. But seeing Guerrero back was a treat, as he rarely is seen at the ballpark.

I can't think of a better reason than that to continue having old timers games. It should be an annual tradition at Dodger Stadium going forward. Let the fans reconnect with players of yesteryear, so it's not so long between visits for a Strawberry or Guerrero.

Sure the play is sloppy but nobody really cares about the game itself. Everyone is out there having fun, the fans get a chance to see their favorite players of the past, and players get another moment in the sun for recognition.

"My favorite part of the day was just watching them announce everybody, I didn't care about the game so much," manager Don Mattingly said before Saturday's game. "Just seeing them announced and run out to the line, that is pretty cool."

The biggest cheers on Saturday were for Don Newcombe, Valenzuela, Tommy Lasorda and Koufax. Especially with Vin Scully introducing them. These are precious moments at Dodger Stadium, with goosebumps and chills throughout the ballpark.

Topps Archives Baseball is a celebration of the 70s, 80s and 90s, what many consider to be the glory years of card collecting. If you collected Topps Baseball Cards during these years then you will love Topps Archives Baseball. Look for autographs and memorabilia cards from today’s stars and your favorite retired players on classic Topps card designs.