Zack Greinke takes the mound in Miami for the Los Angeles Dodgers while the Marlins counter with former Dodger Nathan Eovaldi in the third game of a four-game set.

Zack Greinke is scheduled to take the hill for the Dodgers in the third bout of the four-game Floridian set, while the Marlins counter with old friend Nathan Eovaldi - who was dealt to the Marlins for Randy Choate in a deadline deal last year while Hanley Ramirez was simultaneously swapped for minor-league pitcher Scott McGough - toeing the rubber for Miami.

The two clubs have split the initial contests, so both teams will be battling to get a leg up on the series prior to Thursday morning's (9:40 Pacific) finale. With Clayton Kershaw slated to pitch the getaway game, the Dodgers are strong favorites to split this series at the very least, needing only one win to do so with two aces scheduled to appear. As has been noted many times in this space, the Dodgers have not lost a series since June 14-16, when they dropped two of three in Pittsburgh.

Greinke enters Wednesday's contest with a consecutive scoreless innings streak of 13 2/3 frames, having not allowed a run in either of his last two starts. In seven of his last eight starts Greinke has allowed two runs or less, and has pitched at least into the seventh inning in seven of his last eight outings as well, sporting a 1.45 ERA in that span and holding opposing batters to a tepid .196 / .252 / .296 / .549 batting line. 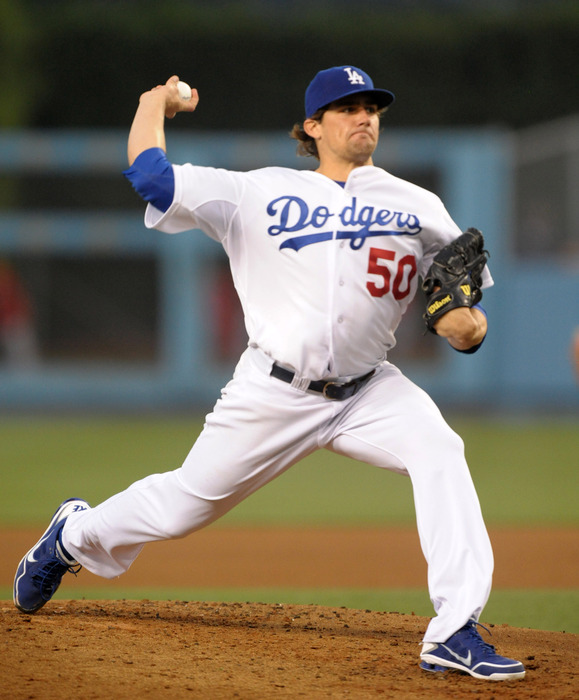 Eovaldi is a bit of a study in small sample sizes this year, having posted nine quality starts in 11 total trips to the mound, but his last effort against the Giants was a disaster that resulted in him allowing 11 runs (nine earned) in three innings of work. That shellacking resulted in his ERA rising more than a full run to 3.96, an ERA+ of 99 (roughly league average) at the moment. The 11 runs allowed tied a Marlin's team record first suffered by current Dodger Ricky Nolasco two seasons ago.

Despite Eovaldi allowing three or less runs and tossing six or more innings in nine outings, Miami sports only a 5-6 record in his starts. Eovaldi actually has more no-decisions (six) than decisions, while carrying a 2-3 record. Not surprisingly, run support has been an issue; there was a five-game span where Miami scored exactly zero runs while the right-hander was in the game.

Eovaldi has faced the Dodgers once previously, almost exactly one year ago, and was cuffed around in Los Angeles, yielding six runs while lasting only three innings, and allowing home runs to Ramirez, Andre Ethier and Juan Rivera in the process.

The Dodgers are 3-2 against Miami this season, having hooked the Marlins in two of three games in Los Angeles in a mid-May weekend series.

Juan Uribe remains hot on this road trip, adding two hits last night to bring his totals to 10-for-17, four extra-base hits (one homer) and four RBI, while appearing in five of the seven games to date.

Speaking of outs on the basepaths, Jay Jaffe of Sports Illustrated is the latest to weigh in on Yasiel Puig, invoking Ennio Morricone while doing so.