Greinke continued on Sunday to show why the Dodgers invested six years and $147 million in the right-hander.

LOS ANGELES -- The Dodgers have been hot, ridiculously so even, for now over two months. Their latest triumph, a 2-1 victory over the Padres to complete a sweep on Sunday, was the fourth straight win for the Dodgers, their ninth different winning streak of at least that length in their last 64 games.

The team is so hot, coming off of a 2.07 ERA as a team in August, that a two-hit performance allowing one run over seven innings was described as a battle for starting pitcher Zack Greinke.

"It seemed like he was battling a little bit, wasn't quite as clean today," said manager Don Mattingly after the game.

Greinke said he told pitching coach Rick Honeycutt that he was tired early, but got stronger as the game went on. Greinke was pulled after just 95 pitches in his seven innings on Sunday, partially thanks to the 122-pitch outing on Monday, when Greinke came within one out of a complete game shutout.

"I think the last time out he was at 120 or something like that," Mattingly said. "At that point I felt like he did the job and got us to where we wanted to go. We got to the bullpen and felt like those guys would do the job."

The job was completed by the bullpen, specifically by Paco Rodriguez and Kenley Jansen, who retired the final five batters of the game. But generally the reliever workload was light thanks to another strong, and long, outing from Greinke, who lasted at lease seven innings for a fourth consecutive start and for the 12th time in his last 17 games. 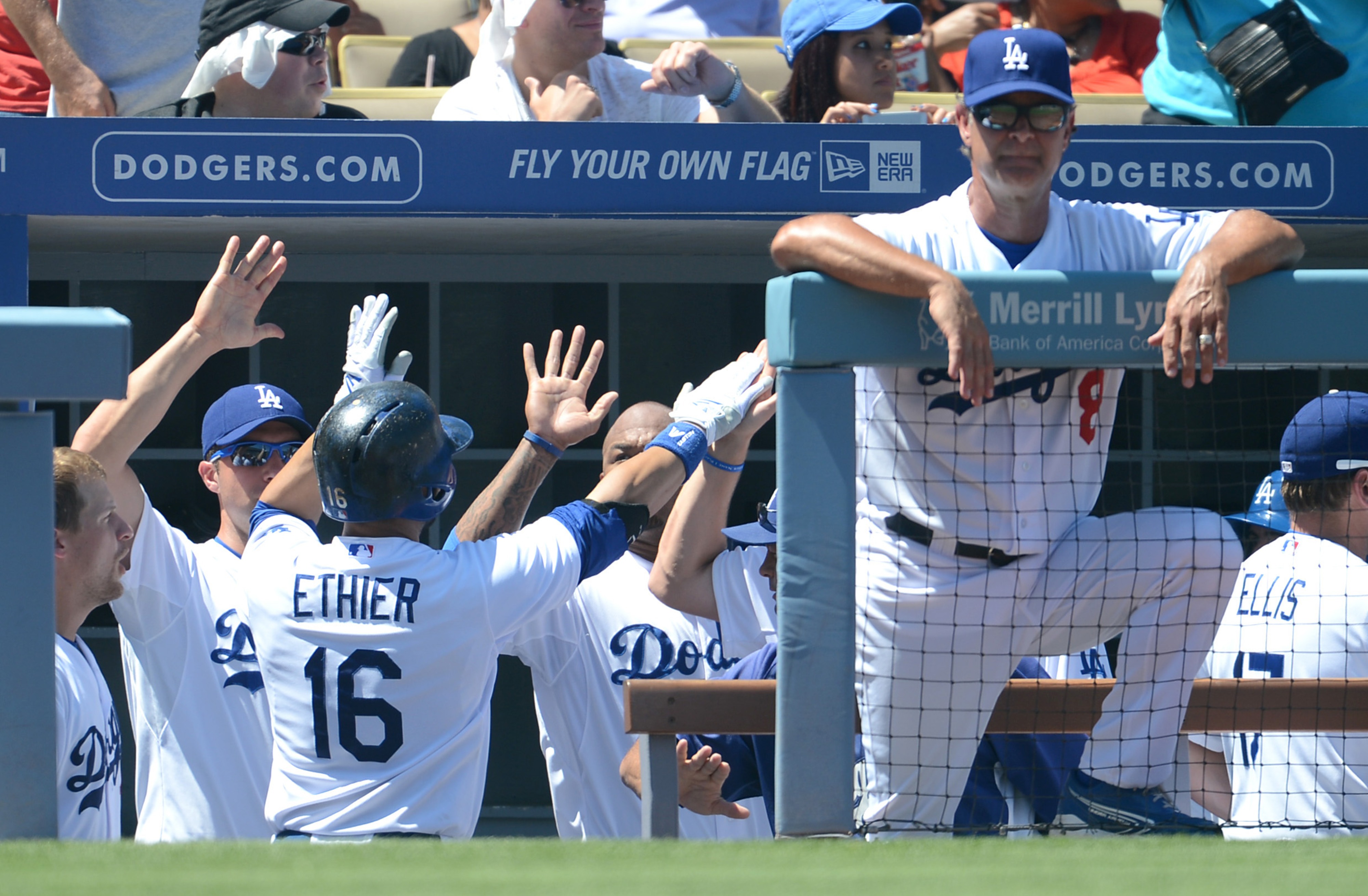 Photo: USA Today Sports Coupled with Arizona's 8-2 home loss to San Francisco, the Dodgers' magic number to clinch the National League West is down to just 16. Any combination of Dodgers wins and Diamondbacks losses that add up to 16 will seal the division for Los Angeles.

Greinke in his last 17 starts is 12-2 with a 2.28 ERA and he has averaged 6.98 innings per start during that span. The right-hander, who won the American League Cy Young Award in 2009, called this one of the best stretches of his career.

"My location has been as good as ever for a long stretch," Greinke said. "It has happened for a couple of starts, but this is the best location I've had for a longer time."

Greinke also went 1-for-2 at the plate and is hitting .347/.429/.388 on the season, but the main topic of conversation after the game was his steal of second base, and specifically his headfirst slide. Though Mattingly said he wasn't worried.

"You know what? These guys are athletes, these guys are players. When you start putting them in a box and wrapping them up that's when they get hurt," Mattingly said. "This guy is a baseball player."

The slide was instinctual for Greinke.

"It was a last minute decision. I thought it was safer than going feet first, but maybe I was wrong," he said. "It felt more comfortable going head first.

With the steal Greinke became just the second Los Angeles Dodgers pitcher with two stolen bases in a season, an the first since Orel Hershiser in 1987. Greinke was asked if the steal was called, by either Mattingly or third base coach Tim Wallach.

"They didn't call that, but they didn't say not to go," Greinke said.

The Dodgers take their win parade on the road, beginning with a three-game series in Denver against the Rockies. Clayton Kershaw, who pitched a shutout at Coors Field on July 2, gets the start in the series opener, facing Chad Bettis for Colorado.