The Dodgers lead the Diamondbacks by 12 games in the NL West with 17 games to play.

The Dodgers got Hyun-jin Ryu back on the mound on Wednesday night, but the Diamondbacks greeted him rudely en route to a 4-1 victory at Dodger Stadium, severely damaging the Dodgers' chances of clinching the National League West at home.

Ryu had one start skipped after back tightness and pitched Wednesday night on 11 days rest, but his first three batters faced all singled for a quick 1-0 Arizona lead. A Martin Prado double play brought home a second run, then two doubles in the second inning gave the Diamondbacks a 3-0 lead.

The Dodgers threatened with runners on base in each of the first five innings, including multiple runners in the second, third and fourth frames. They put another runner in scoring position in the fifth inning, but couldn't score off Patrick Corbin.

Perhaps it was the Dodgers lineup, missing a key player (hat tip to Bryan Kilpatrick of Purple Row) 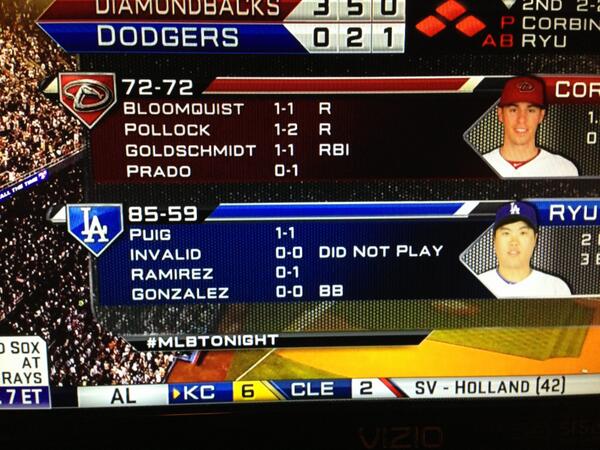 Ryu ended up lasting six innings but allowed 10 hits. He left trailing 3-0, and the Diamondbacks added another run against Brandon League in the seventh.

Yasiel Puig homered deep into the Dodgers bullpen in the seventh for the Dodgers' only run of the game.

Onelki Garcia was added to the roster earlier on Wednesday, and the 2012 third round draft pick made his major league debut in the ninth inning. He faced the left-handed Adam Eaton and walked him on four pitches, and was promptly removed.

Good quote from Don Mattingly on Garcia: "I don't think he knew he had one hitter. Maybe I should've told him."

Garcia is the first Dodgers pitcher since Erv Palicka on Sept. 18, 1947 to issue a four-pitch walk to his only batter faced in his major league debut.

With the loss, the Dodgers' magic number remains six, making it extremely difficult for the Dodgers to clinch the division by the end of the homestand on Sunday. The Dodgers have four games against the Giants and the Diamondbacks host the Rockies for three games. The Dodgers need at least six of those seven outcomes to go their way to become NL West champions in front of the home crowd.

But there is always next week in Arizona, where the Dodgers play four more games.

The Dodgers welcome the rival Giants to town for a four-game series beginning Thursday night. Zack Greinke starts the opener for the Dodgers, facing Matt Cain for San Francisco.