The Dodgers have eight walk-off victories this season.

Adrian Gonzalez delivered the game-winning single in the 10th inning on Thursday night to give the Dodgers a 3-2 win over the Giants in the bizarre opener of a four-game series at Dodger Stadium.

After Carl Crawford opened the 10th inning with a ground ball single, he was sacrificed to second base. With first base open Vin Scully wondered if the Giants would intentionally walk Gonzalez, hitting .326/.377/.553 with runners in scoring position entering Thursday.

"The Giants certainly have nothing to lose except the game," Scully said.

The Giants did just that when Gonzalez lined a single to center off Jeremy Affeldt to score Crawford, giving the Dodgers their third win in four games to drop their magic number to clinch the National League West over the idle Diamondbacks to just five.

Brian Wilson got the win in his first appearance against his former team, pitching a scoreless 10th inning. He issued a one-out walk to Brandon Belt on a full-count pitch but retired Buster Posey and Hunter Pence to end the frame.

Before the bottom of the second inning the Prime Ticket television broadcasted noted that the Giants had a 13-game streak without making an error, their longest streak in franchise history in the modern era (since 1900). But in the inning Andre Ethier was awarded a single on a ground ball off the glove of Pablo Sandoval, followed by a Juan Uribe pop up dropped by second baseman Marco Scutaro, who was able to force Ethier at second base.

A sure double play ball back to Matt Cain was thrown into center field, shades of Fernando Rodney, officially ending the errorless streak, not to mention putting runners at the corners. After a run-scoring ground ball from Mark Ellis to tie the game at 1-1, Zack Greinke grounded a ball that Sandoval made a diving play to stop but couldn't get out of his glove for a single.

The hit by Greinke was his 18th of the season, the most by a Dodgers pitcher since Ramon Martinez had 18 in the strike-shortened 1994 campaign. Greinke is hitting .340/.417/.377 this season, the highest on-base percentage by a Dodgers pitcher in a century. In the 130-year history of the franchise, the only Dodgers pitcher with a higher OBP than Greinke in a single season (minimum 50 plate appearances) was Earl Yingling, with a .464 mark in 1913.

Greinke was also effective on the mound, even on a night the Giants fouled off several pitches. He allowed one run on four hits in his six innings, with five strikeouts and two walks. Greinke has allowed 16 runs in his last 13 starts, which include 11 Dodgers wins.

Greinke was removed after those six innings because he threw 107 pitches, and during his final inning J.P. Howell was warming up in the bullpen. As the Dodgers were batting in the bottom of the inning Paco Rodriguez, like Howell a left-handed reliever, warmed up as well, and when the seventh inning began Rodriguez came into the game.

As Rodriguez was warming up, manager Don Mattingly motioned to home plate umpire Gerry Davis that he was removing Rodriguez, which under normal circumstances would not have been allowed without pitching to a batter unless Rodriguez was hurt. But he wasn't hurt; the Dodgers explained that Mattingly originally told Davis that Howell was coming into the game but when Davis motioned with his left hand toward the bullpen Rodriguez entered by mistake. 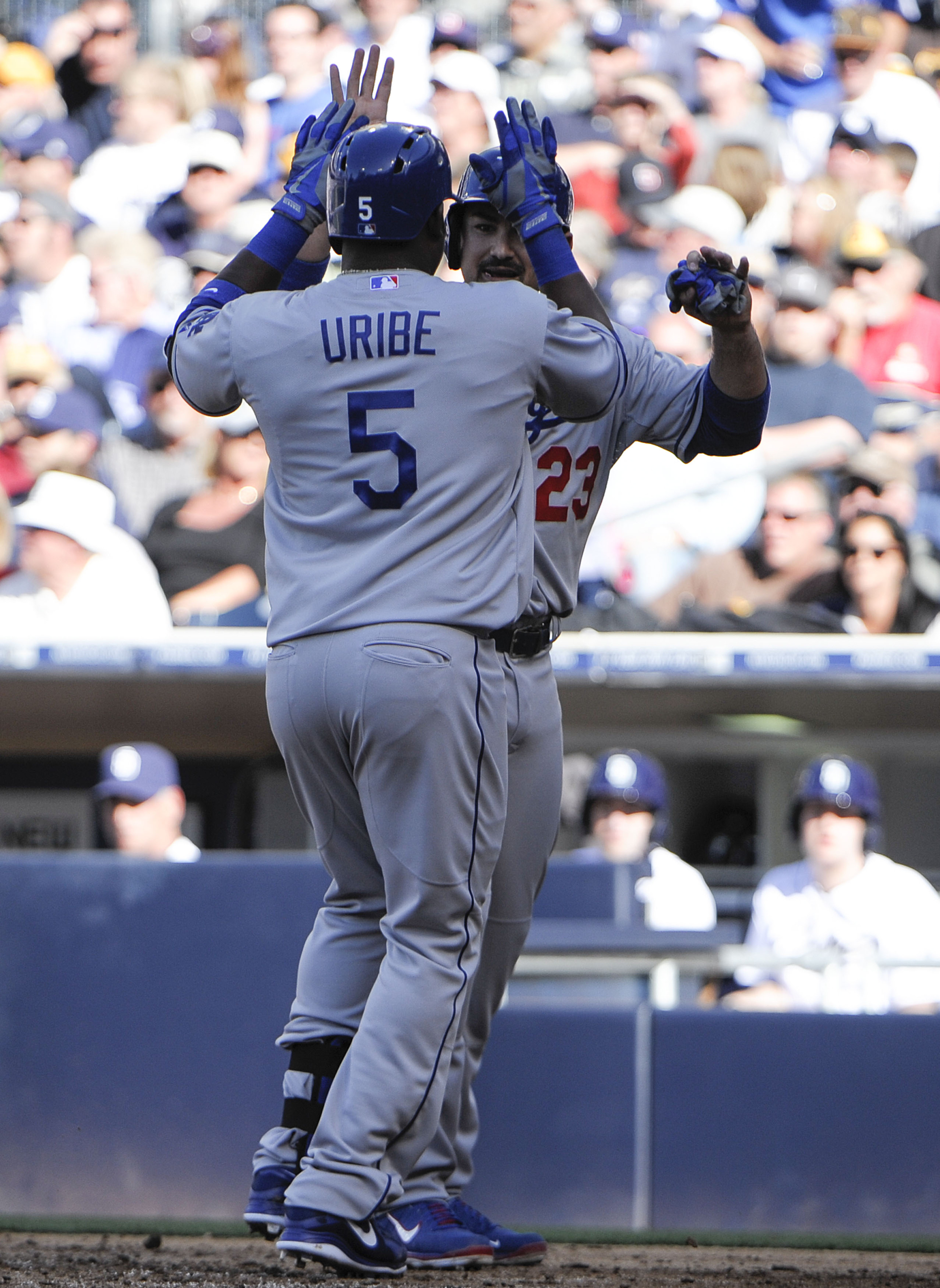 Arizona was off on Thursday, but with the win the Dodgers lowered their magic number to clinch the NL West to five. The earliest date the Dodgers could possibly clinch the division is Sunday.

Howell came into the game and a confused Rodriguez was allowed to go back to the bullpen, still eligible to enter the game at a later time.

For the second time on the homestand Dee Gordon stole a base as a pinch runner in the late innings, doing so for A.J. Ellis in the seventh inning on Thursday. Mark Ellis then sacrificed Gordon to third base, but pinch-hitter Jerry Hairston struck out, bringing Puig up with two outs.

Puig delivered with a double to the left center field gap off Cain for the go-ahead run and a 2-1 lead.

Cain finished his night with just two runs allowed, one earned, in seven innings. He struck out five and walked one.

Rodriguez did eventually enter the game, again, this time officially for the 71st time this season, in the eighth inning. After Rodriguez got the left-handed Belt out on a sacrifice bunt he intentionally walked Buster Posey to load the bases. Mattingly then brought in Ronald Belisario for his 71st appearance, tied with Rodriguez for the team lead.

Pence, who homered in the second inning for the Giants' only run, bounced a ball to Juan Uribe, who dealt with a tricky hop then stepped on third and threw a bouncer to first base, scooped out nicely for an inning-ending double play.

Kenley Jansen blew his first save since June 29, allowing three hits and a run in the ninth inning. After Sandoval singled to open the frame, pinch-runner Juan Perez stole second base, then advanced to third base one out later on a passed ball by Tim Federowicz. Gregor Blanco then singled to center to tie the game at 2-2, snapping Jansen's streak of 18 straight save opportunities converted.

Jansen might have given up more had Blanco not been thrown out trying to steal second, as Hector Sanchez doubled to right field.

The Dodgers improved to 10-5 in exta-inning games, including 2-0 on this homestand in bonus frames.

The Dodgers sent ace and San Francisco exterminator Clayton Kershaw to the mound on Friday night in a matchup of great young southpaws. Madison Bumgarner takes the ball for the Giants.