The Dodgers scored nine or more runs for the 13th time this season.

What a difference a day makes. The Dodgers welcomed back Matt Kemp and Hanley Ramirez to their starting lineup on Tuesday night and it showed, as the offense exploded in a 9-3 win over the Diamondbacks to snap a four-game losing streak.

Kemp went 4-for-4 with two doubles and three runs batted in. It was the 12th game of his career with four or more hits and his first since Sept. 26, 2012. Not bad for his first start in over eight weeks.

Ramirez returned after missing four games and reached base four times. He was 1-for-2 with three walks, and scored three runs.

The victory gave the Dodgers a 10½-game lead over Arizona in the National League West and lowered their magic number to clinch the division to two. One more win in the final two games of the series for the Dodgers gives them the NL West.

Ramirez followed Mark Ellis's first-inning single with one of his own, then each advanced one base on a wild pitch. After Adrian Gonzalez popped out, Kemp came up in a similar situation as Monday night, with runners on second and third base and two outs. This time, Kemp delivered with a double into the left field corner to give the Dodgers a 2-0 lead, more runs through five batters than they scored all of last night.

Juan Uribe followed and, free from the shackles of a bunt sign, golfed a ball into the seats for his 12th home run of the season and a 4-0 lead. Uribe went full jazz hands and the Dodgers dugout rejoiced (per the team's Tumblr):

For a team that hadn't scored more than three runs in any of their previous six games, with just 13 total runs during that span, the first inning provided a huge sigh of relief.

But the Dodgers weren't done.

Ramirez walked in the third inning and Gonzalez followed with his 21st home run of the year for a 6-0 lead. Gonzalez has 97 RBI on the season. Kemp nearly made it back-to-back home runs with Gonzalez, but settled for a double off the center field wall. 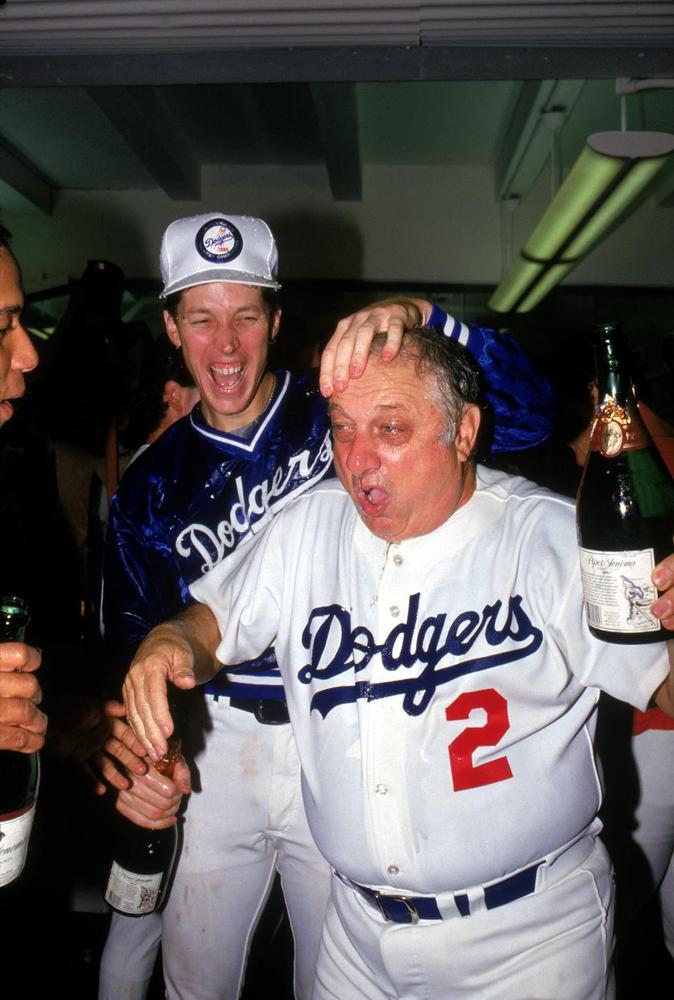 With the win, the Dodgers cut their magic number in half. It is now two.

Even Zack Greinke got into the action in the fourth inning with a leadoff walk. It was the seventh walk of the season for Greinke, in just 69 plate appearances, making him the first Dodgers pitcher since Bob Welch in 1987. Welch had his seven walks in 98 PA.

Greinke advanced to second on a ground out, then scored on a single by Mark Ellis. Three batters later Kemp singled home Ellis for an 8-0 lead.

On the mound Greinke continued his ace-like run. He allowed two runs on six hits in six innings, his 10th consecutive start giving up two or fewer runs. Greinke has allowed 18 total runs in his last 14 starts, with a 1.66 ERA during that span.

But the story of the night was the Dodgers offense, who knocked out Patrick Corbin just three batters into the third inning for the shortest start if his career. The Dodgers had six runs and seven hits against Corbin, who recorded six outs. None of his previous 29 starts this season lasted fewer than five innings.

In his first 61 games of the season, Matt Kemp had no games with multiple extra-base hits. But he has had two extra-base hits in each of his last two starts. In addition to the two doubles on Tuesday, Kemp homered and doubled in his last start as well, on July 21 in Washington.

Michael Young chipped in with an RBI triple in the eighth inning, his first extra-base hit as a Dodger.

Yasiel Puig went 0-for-5 on the night, but Tuesday marked just the 10th time that Puig, Ramirez and Kemp were in the same starting lineup. The Dodgers have scored five or more runs in all but one of those games, averaging 6.8 runs per game. Most importantly, the Dodgers are 8-2 with that trio in the lineup.

Even in a blowout, both Ronald Belisario and Paco Rodriguez pitched for the Dodgers. It was only the second appearance for both in the last five days, but it moved them into a tie for the major league lead in games pitched this season. Rogriguez and Belisario are tied with Scott Rice of the Mets, Joel Peralta of the Rays, and James Russell of the Cubs with 73 appearances.

With a six-run lead in the ninth inning Kenley Jansen pitched the ninth inning, his first appearance in five days. In his 71st game of the season Jansen walked two batters, his first game with two unintentional walks all season, but got the final three outs to finish the win.