Ellis hit his eighth home run of the season in the eighth inning on Thursday to give the Dodgers their 12th division title.

Share All sharing options for: A.J. Ellis on his division-winning home run

PHOENIX -- Dodgers catcher A.J. Ellis hit the home run of his life on Thursday afternoon, an eighth-inning solo shot over the left field wall to give the Dodgers a 7-6 win and their first National League West division title since 2009.

"I hit a big home run in little league to get to the semifinals of pool play," Ellis joked after the game. "That home run there was as big as it gets for me. I floated around the bases."

Ellis had been struggling offensively, in an 0-for-16 slump entering Thursday and hitting just .165/.244/.239 in 35 games since the beginning of August. And he knew it.

"I wanted to contribute offensively to help this team win the division. I've been scuffling the last weeks and months," Ellis said. "I needed to be more than just a defensive guy. I needed to show a little offense too."

It was part of a 3-for-4 day for Ellis, who also doubled. Seven of his eight home runs this season have come on the road. He didn't know this one was out when he hit it. 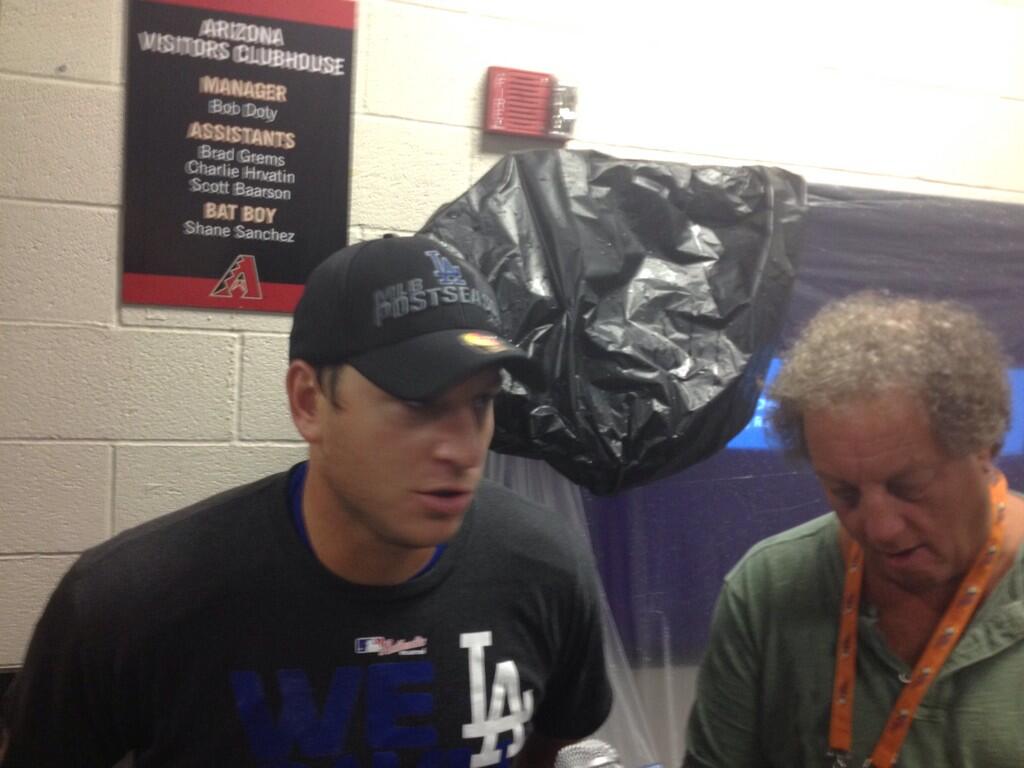 Ellis meets the media after his game-winner.

"I hit it and the crowd kind of made some noise. I was hoping it would at least be over his head at least for a double," Ellis recalled. "I looked up and [first base coach] Davey Lopes had his hand up, so I hit it and kept trotting around the bases."

Ellis was technically on the Dodgers when they won division titles in 2008 and 2009, but only played 12 games combined in both years. After nine years in the minor leagues and now a second-year major league starter at age 32, Ellis takes ownership of this division title.

"Even in 2008 and 2009 when I was a September call-up and got to watch the guys celebrate, I still didn't feel a part of it," Ellis said. "To be the starting catcher on this team and to experience this right now, it's really humble. I'm really thankful and grateful that the organization stuck with me."

"The collection of players here is unmatched in all of baseball," Ellis said. "When we get those guys together and in the right form, clicking together, it's going to create amazing results."

Who cares? The Dodgers are division champs! But first they must finish out the regular season and will start a three-game series against the Padres on Friday night in San Diego. Edinson Voquez starts for the Dodgers against Robbie Erlin for the Padres.

More importantly the Dodgers don't have to concern themselves with what the Diamondbacks are doing.

"We didn't want to scoreboard watch tomorrow," Ellis said. "In 2008 we kind of backed into the playoffs because Arizona lost. It feels great to do it on the field with a win."