When Dodger Stadium was proposed back in 1957, the Golden State freeway was still in the planning stage and Los Angeles City Hall was a major landmark.

Share All sharing options for: Dodger Stadium map from 1957 proposal

It's time for another Josie historical article! (I swear I'll never try and write about current stuff ever again, only historical pieces with a cheery tone) USC Digital Libraries tweeted out earlier today this map and diagram of proposed Dodger Stadium in Chavez Ravine, 1957.

Map of Dodger Stadium, soon after it was first proposed in 1957: http://t.co/JBk9tah44x

Fair to say this is pretty wicked awesome and deserves to be taken apart bit by bit. In 1957, when Dodger Stadium was first proposed, the LA freeway system was just starting to come into its own as I wrote a few weeks ago. In that article there was also a photo which marked a proposed freeway, here described as a proposed Riverside freeway. 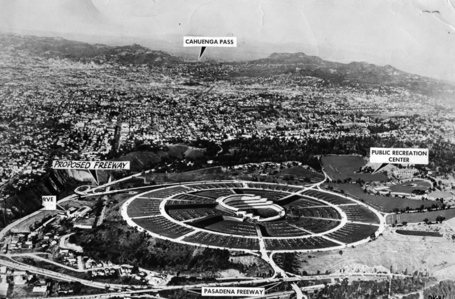 That photo was also from the 1957 event where Dodger Stadium's construction was first presented to the public. Like the map it has the geometrically circular parking lot, and the $500,000 free public park. The photo here also points out the Cahuenga pass, showing relative distance to the valley, which the map doesn't. There to the left of Dodger Stadium is the proposed freeway. 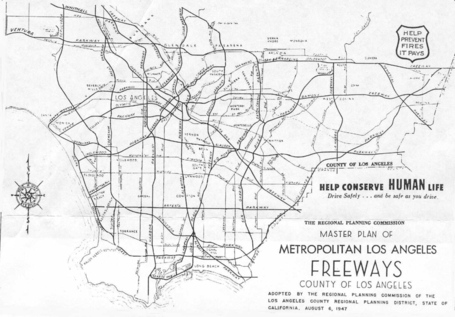 This master plan of Metropolitan Los Angeles freeways, aside from being completely insane (I mean, where would they get the money to turn every major street into a freeway), sheds a little light on the mystery. Riverside in this instance doesn't refer to the city of Riverside. It's the portion of the Golden State Freeway along Riverside Drive (aside the LA River, of course). Construction of the freeway ended up north of Dodger Stadium instead of running south of it.

The focus of the map shown at the announcement of Dodger Stadium is very much on freeway access. The existing Pasadena freeway, Hollywood freeway, the eventually completed Harbor freeway, and the eventual Santa Ana freeway which would controversially tear through East LA.

I also like that LA City hall was still a major landmark. It's prominent looking out from the Dodger Stadium parking lot, but these days it's dwarfed by skyscrapers to the south.

The location of Dodger Stadium was largely sold on freeway access, but this proposal map highlights an important point. The Dodgers came from a situation in New York where each borough had it's own team, where large cities had two teams, to expecting people to drive 40 minutes from Santa Ana to watch a game.

Before the Dodgers moved west, LA had two small stadiums fifteen minutes apart. Now a 56,000 seater baseball only stadium was expecting to draw people from the next county. Thank goodness it was a few years too early for the county owned multi-purpose stadium trend.