The Dodgers 2014 season is over, but with the World Series yet to start it doesn't quite feel right in getting into offseason reviews. Those will likely come next week, with the goal to review one player per day.

Perhaps a more accurate reason why I haven't started the offseason reviews however is that I have not yet been able to fully process the abrupt end to the Dodgers' season. Entering the seventh inning in the NLDS against the Cardinals, the Dodgers led three games and were tied in another - the relative scores were 6-2, 2-0, 1-1 and 2-0.

The moral of the story of the NLDS: giving up late home runs is bad, and allowing three-run hits is almost never good. Especially when one pitcher allows two of those three-run hits in the same series. It's even more shocking when that pitcher is about the be unanimously named the National League Cy Young Award winner, his third award in four years, and was widely regarded as the best pitcher in the sport.

But it was Clayton Kershaw who allowed a three-run double to Matt Carpenter in Game 1, and a three-run home run to Matt Adams in Game 4. Both hits turned a two-run Dodgers lead into a one-run deficit and pushed Kershaw's record against the Cardinals in the last two postseasons to 0-4 with a 7.15 ERA.

To fully blame Kershaw for both losses isn't accurate - especially given the 6.48 ERA and three home runs allowed by the Dodgers bullpen in 8⅔ innings in the series - but it is only natural, and a small form of psychological torture to wonder what might have happened had Kershaw not allowed both big hits. 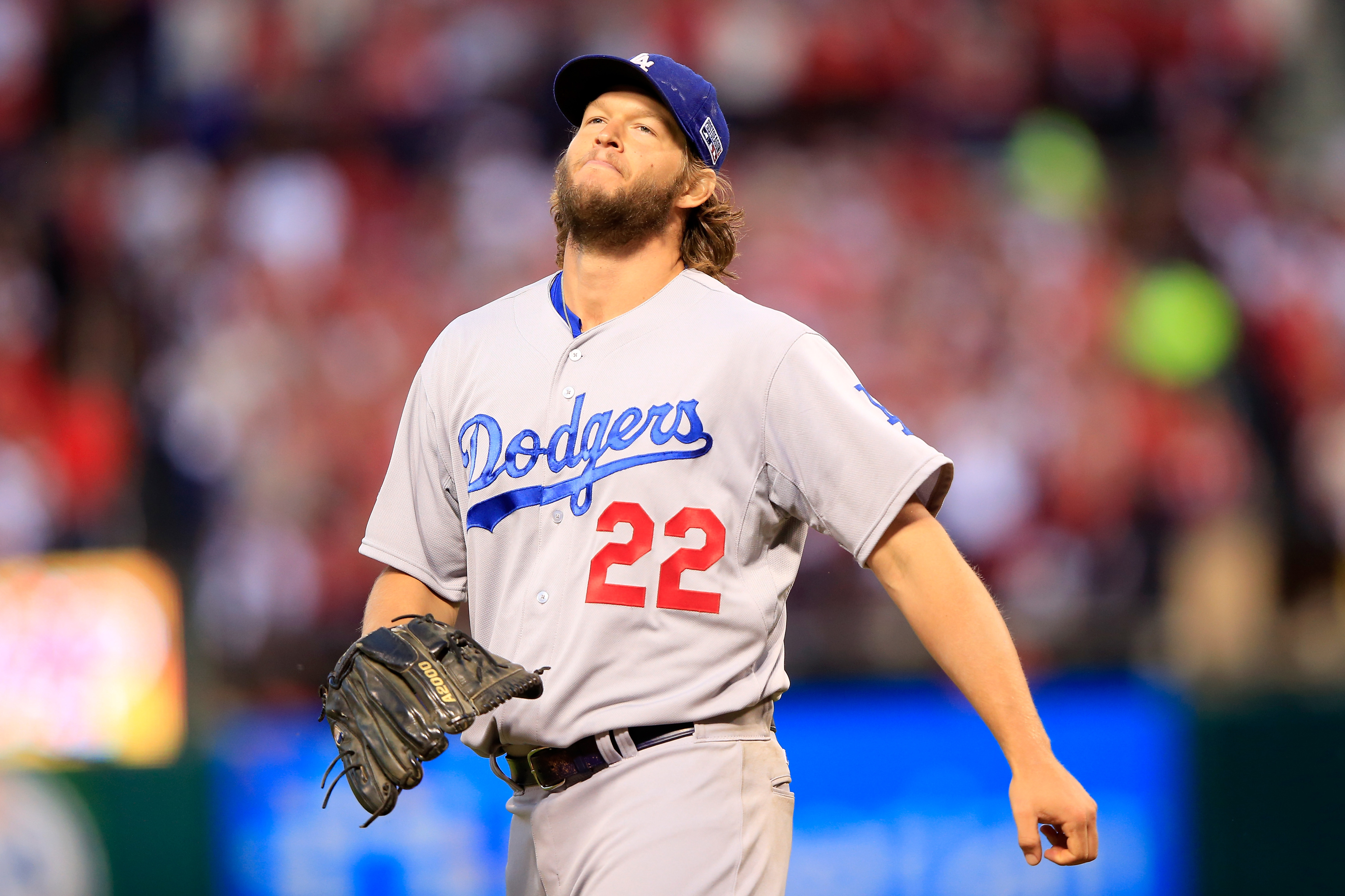 That Kershaw allowed two three-run hits in the same series is quite rare in Dodgers history, considering the franchise has allowed 27 total hits producing three or more runs in its postseason history.

But he's not alone.

There were two other Dodgers pitchers to allow a pair of three-run hits in the same postseason series. Coincidentally, all three pitchers were 26 years old when allowing their big hits.

Grimes was a legendary spitball pitcher who won 270 games in his 19-year Hall of Fame career. He pitched his prime years with the Dodgers, from 1918-26, winning 158 games while averaging 270 innings per season from ages 24-32.

The 1920 World Series was best-of-nine, the penultimate long Fall Classic before permanently switching to a best-of-seven format in 1922. The Dodgers, known then as the Robins after Hall of Fame manager Wilbert Robinson, led the series two games to one, including a shutout by Grimes in Game 2.

Cleveland tied the series in Game 4, then Grimes took the mound in Game 5 at Dunn Field in Cleveland.

After a pair of singles to open the first inning against Grimes, Tris Speaker bunted for a hit to load the bases with nobody out. Elmer Smith followed with a grand slam for a quick 4-0 Indians lead.

With the same score in the fourth inning, the Indians put another two runners on when Jim Bagby - the opposing starting pitcher - hit a three-run home run to put the game away. It was also the first home run hit by a pitcher in World Series play. So not only did Grimes allow two three-run hits in the same series, but did so in the same game.

But that wasn't even what this game is remembered for.

In the top of the fifth inning, Dodgers second baseman Pete Kilduff and catcher Otto Miller each singled, bringing up pitcher Clarence Mitchell, who replaced Grimes on the mound in the previous half inning. Mitchell lined a ball headed toward center field, but second baseman Bill Wambsganss caught the ball, with his momentum taking him toward the bag. With both runners running, Wambsganss stepped on second to retire Kilduff, then tagged Miller for the first unassisted triple play in World Series history.

The Dodgers lost 8-1 in Game 5, and dropped the World Series five games to two. Grimes pitched seven innings on one day of rest in Game 7, losing the finale 3-0. 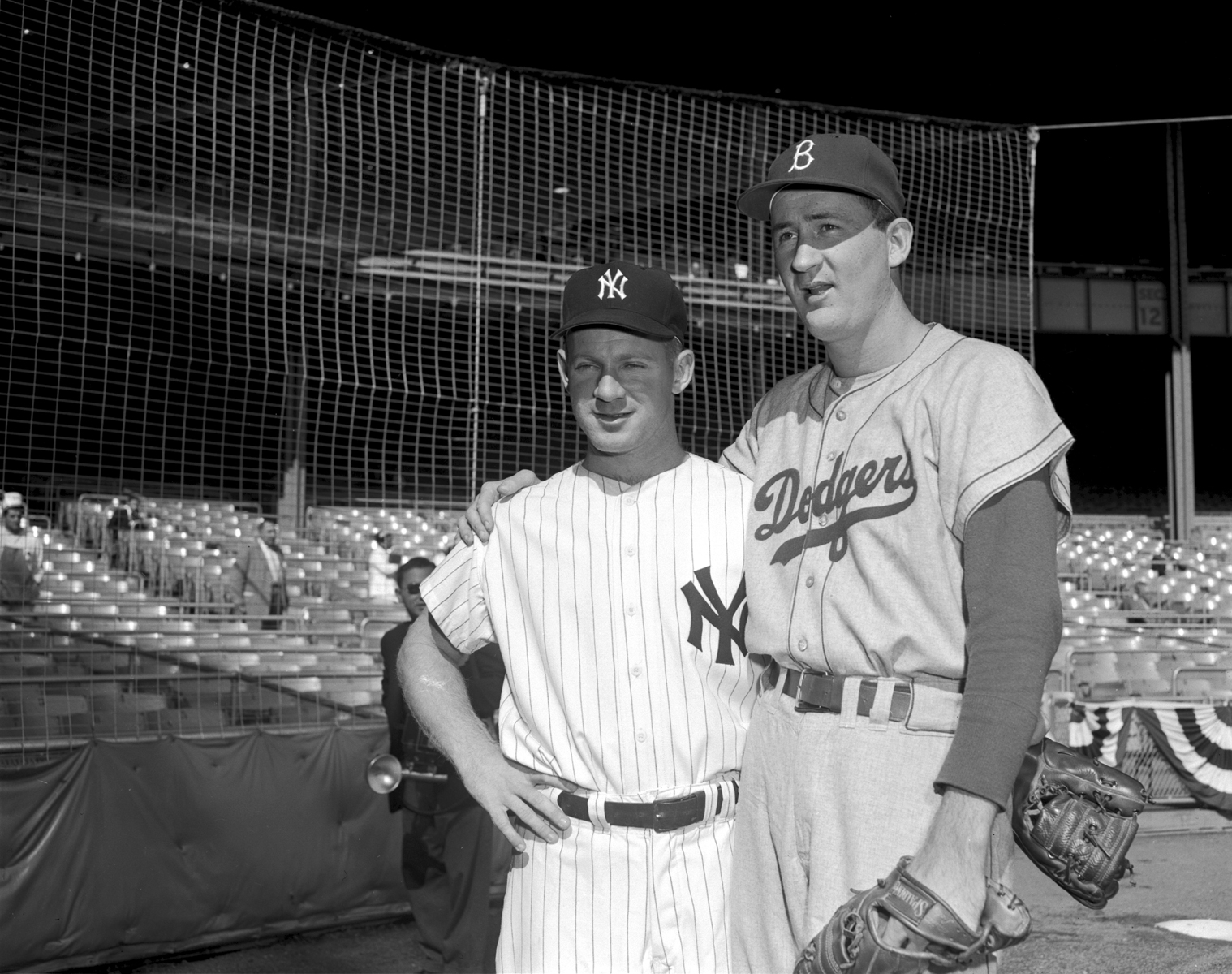 The future Giants manager was a 26-year-old pitcher with the Dodgers in his second year in 1956. The Dodgers won their first World Series the season before, and jumped out to a 2-0 World Series lead over the Yankees with a pair of wins at Ebbets Field in Brooklyn, then turned to Craig to start Game 3 at Yankee Stadium.

The Dodgers held a 2-1 lead into the sixth inning, when Craig served up a two-out, three-run home run to 40-year-old Enos Slaughter, giving the Yankees the lead in a game they would win 5-3.

The home team won the first six games of the 1956 World Series, including a perfect game by Don Larsen in Game 5. But with Game 7 at Ebbets Field the Dodgers had reason to be confident, especially with Cy Young Award winner Don Newcombe getting the start.

Things did not go as the Dodgers planned in Game 7.

Three home runs and five runs knocked out Newcombe with nobody out in the fourth inning, and the Dodgers still trailed 5-0 when Craig entered in relief in the seventh inning. After a single to Billy Martin, a walk to Mickey Mantle and a wild pitch, catcher Yogi Berra was intentionally walked to load the bases. Moose Skowron followed with a grand slam to left field to finish off the scoring in the Yankees' 9-0 series-clinching victory.

Craig in Game 7 faced five batters, and didn't record an out.

Same goes for Tim Belcher, who allowed a three-run shot to Lenny Dykstra of the Mets in Game 5 of the 1988 NLCS, then a grand slam to Jose Canseco in Game 1 of the World Series five days later.