LOS ANGELES -- After having all the energy sucked out of Dodger Stadium for a second straight day, a rejuvenated Matt Kemp resuscitated the crowd and the Dodgers with a game-winning home run in the eighth inning of the Dodgers' 3-2 win over the Cardinals in Game 2 of the National League Division Series at Dodger Stadium.

"I think in the playoffs any time you get hits like that to help your team win is big. So that's definitely tops as one of the big ones I've hit," Kemp said. "That was definitely fun."

What wasn't fun was watching a completely defensible pitching decision by Don Mattingly completely blow up in his face for a second straight night.

Greinke was magnificent in his seven scoreless innings, allowing only two hits and two walks while striking out seven. Greinke matched his hits allowed with two hits of his own, including a single and run scored in a two-run third inning that gave the Dodgers the lead.

All three batters got hits against Howell, including a game-tying two-run home run from dream-haunter Matt Carpenter.

More on that decision later, but what was different in Game 2 than in Game 1 was that the Dodgers never trailed on Saturday. When reliever Brandon League got a double play - started by defensive replacement Miguel Rojas, making a play Hanley Ramirez would not have - to end the threat, there was still hope remaining, at least in the Dodgers dugout.

"One League got out of the jam, I felt pretty confident in us winning the game. I thought we definitely had the better odds, just with how we have been swinging the bat," Greinke said. "It seemed like a mistake pitch to Matt and he's been hot, as everyone knows, and that was exciting."

"I laid off some tough ones that were close on the plate, but he left one just out over the plate that I could do something with, and I put a good swing on it," Kemp recalled.

Kemp has three career postseason home runs, the last two coming back in 2009. This time last year Kemp was on crutches and in a walking boot after ankle surgery, the culmination of two injury-plagues seasons that also saw a pair of shoulder surgeries as well.

"I think it's been a tough couple of years for him, with multiple surgeries and taking a lot longer to get back, to kind of get rhythm and get back into the game," Mattingly said. "It's been kind of a tale of two seasons for Matt. It started off with the first half a little more of a struggle, and he started to get more hits. Then in the second half all the power came."

Kemp after the All-Star break hit .309/.365/.606 and led the National League with 17 home runs, reestablishing himself as a force again in the middle of the Dodgers lineup.

"He's healthy. That's really what it comes down to. You can tell there's a different approach and how he attacks the ball," said Cardinals manager Mike Matheny. "He's in a good spot health-wise right now and you can tell it in his swing."

Kemp's home run put him in rare company, just the fourth Dodgers player in the last 30 years to hit a go-ahead home run in the eighth inning or later of a postseason game, with a bit of an oops by MLB Network on the graphic: 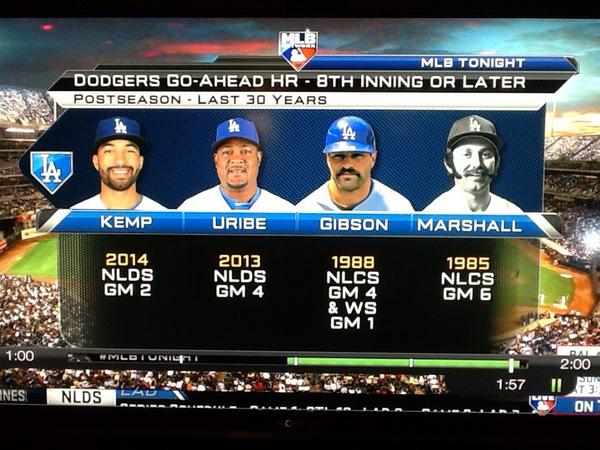 Thanks to @LADfan8 for the screen cap.

"Last year was a disappointing year for me as far as just sitting there and watching my team be successful. I thought I could have helped them a lot," Kemp said. "I'm just blessed to be able to be on this stage and be able to be healthy and help the team try to accomplish a big-time goal."