Before we get into the top 20, here are some prospects who just missed making the list.

Starting this week, I will be rolling out my first top 20 prospect countdown on True Blue LA. Ideally, this will be the last year of 20 profiles, as I hope to expand it to 30 players when I’m able to view more in person, or have the opportunity to view more on video. Nevertheless, I’m comfortable with my list of 20 players and am ready to share them with you, but before I do, let’s discuss some trends and themes in the top 20 list, as well as some notes on players you won’t find on it.

In coming up with my rankings, I found myself separating the players when comparing them into three tiers. The first tier consists of four players and essentially ranked itself. You generally hear the Dodgers’ system talked about in terms of a "Big Three," but I feel a fourth player has as much potential to be an impact player as he develops. Tier two is much larger and has the steepest drop off behind it. I consider my players from five to 12 in this group, and the biggest thing this group has in common is how close to the majors (minus one) this collection of talent is. Should the Dodgers be looking to move some prospects for major league help, I’d expect packages to be built around this group of guys, with tier one being as untouchable as possible, and tier three being far less appealing to an inquiring team. Tier three is a combination of raw players several levels below the major leagues, and players limited in upside or high impact potential.

You will undoubtedly think this and I’ll agree with you. The Dodgers are sorely lacking in positional talent, thanks largely to a group of high school draft picks from 2012-2014 that have struggled to gain footing in full season ball. Starting pitching looks rosier, but you’ll notice that several starting prospects are seen as better relief arms, either from other scouting reports or my own opinion. I would never endorse a team targeting specific positions in the draft, and I won’t do so here, but the Dodgers could use a few more bats to better round out their young talent portfolio.

Handful of players that could be ranked but are not

This is the biggest issue I hope to resolve in the coming months, but there are some players with solid scouting reports that I’ve found little to no video to use to evaluate them. This group of players includes:

John Richy: I’m assuming Richy will be my biggest omit, as the reports on the 2014 third rounder out of UNLV suggest a durable innings eater with a solid sinking fastball (Note: Coming from following an organization that prides itself on developing sinkerballers, I will say that Logan White not only emphasized it more, but his pitchers have far superior sinkers than Rockies’ arms). The pickings at the bottom of my rankings were rather slim and there was plenty of room for a number 3-4 starter that could finish his first full season in High A, but I have nothing to go on outside of a few sentences on him.

Kyle Farmer: Farmer is probably closer to the "just missed" than he is this list, but I felt he should receive mention here because of his post-draft position switch. If we try to read clues from his mid-season promotion and his playing time against more established collegiate catcher Navin and Maynard, then we can assume the Dodgers think highly of his potential. I’m anxious to see how he performs behind the plate in person, because the offensive profile is catcher or bust. Farmer has a compact swing and decent bat speed and profiles to adequate gap power potential. 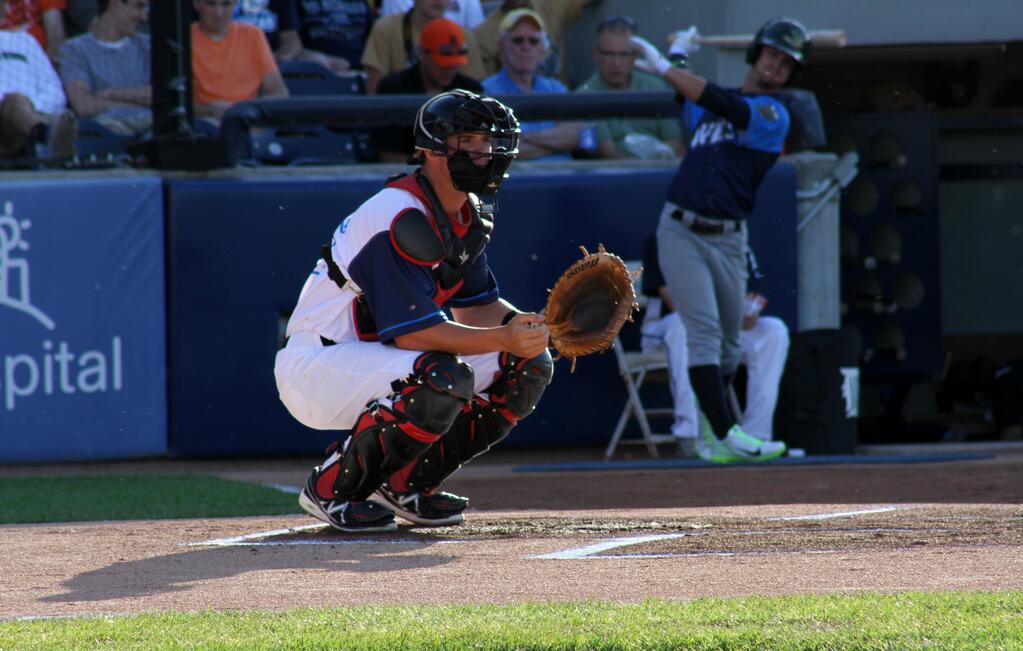 Jacob Scavuzzo, Ibandel Isabel: These two seemingly toolsy players took a step or two back this season production-wise, and stalled somewhat advancement-wise. This alone could make them both non-ranked players, but there’s a tool factor here worth examining and for this reason I consider them unable to be ranked. In limited looks at Scavuzzo, he does appear to show solid bat speed and good speed underway, but his pitch recognition seems raw and he’s getting closer to the age when raw is more damning than excused away.

Alex Guerrero: Technically, Guerrero still holds rookie eligibility, but he turns 28 this week and isn’t really in his peer group with this list. I’m arbitrarily choosing not to rank Guerrero because I don’t put him in the same class of players as I do the players I’ve ranked. That doesn’t mean I don’t believe he’s talented, nor does this mean I won’t rank future foreign pros. I just feel that age and the context of age against similarly experienced players is critical for the evaluation process, and potential value to the organization changes with age and is leveraged by having cost controlled pre-arbitration contracts.

Onelki Garcia: Coming to the end of the list, I decided to chose between one lefty specialist and Garcia and chose the yet-to-be-named player. While Garcia receives praise from other outlets for his power arsenal, I remain a bit skeptical to just how useable his power arsenal is without better than fringe average command. The primary attribute working against Garcia is his athleticism, as Garcia shows inconsistencies in both arm slot and arm speed. Garcia drags his arm behind his body slightly in his delivery and shows more of the ball than you typically see with a left handed reliever. When healthy, I expect Garcia to challenge for a role in the Dodgers bullpen, but I get more the feeling from him that he will always tantalize with stuff that doesn’t play up to its radar gun speeds.

Yimi Garcia, Carlos Frias, Matt Magill: It may seem like a something of paradox to leave players that have essentially made the major leagues and are ready contribute off the list based on potential, but these three are living on the fringes of the roster, limiting their long term utility. As "taxi squad" types, Frias, Garcia, and Magill can expect to log many miles between Los Angeles and Oklahoma City, but none are polished enough to establish a firm foothold. Garcia might be the closest, with superior command of his solid average fastball and fringe breaking pitches, but his repertoire suggests middle relief and low leverage. Frias has the radar gun readings, but his fastball doesn’t miss barrels and he occasionally uses two different release points for his fastball and breaking ball. Magill has a deliberate delivery and arm stab at the back that affects command of his erratic repertoire. While his command issues suggest a future role in relief, he’s likely more valuable in the present as a spot starter/long reliever.

Justin Chigbogu: For a big guy with enormous strikeout numbers, I was very surprised to see a player with good bat speed. His height/weight/stat line would suggest a slider bat speed masher that feasts on mistakes, but Justin looks instead like a guy that struggles to read pitches and doesn’t consistently bring the same swing from pitch to pitch. At times in batting practice video, you will see Chigbogu almost swing one-handed with an early top hand release on contact, while other pitches he’ll shift his weight effectively to drive the ball with power. I don’t know if Chigbogu has enough time to get comfortable in the batter’s box before the luster wears off his star, but the 70 raw power grades you read appear legit, and he isn’t the typical first base quasi-prospect that lacks the bat speed to hit at the big league level.

Greg Harris: Harris has reached the MLB Pipeline Top 20 at No. 20, and after a successful full season debut, seems prime to take on High A already as a 20 year old. The issue with Harris stems is of the "how" variety instead of the "what." Harris’ delivery is herky jerky and mechanically he rises up before release and tends to pitch higher in the zone. Velocity and life appear fine, but he did not show (Draft Film) the extension and finish you would like to see to get the ball driven down in the zone. My expectation is that Dodgers’ staff has worked to smooth out Harris’ delivery within reason, especially to improve the plane of his pitches. Harris used a big slurvy breaking ball in high school that he could throw for strikes but popped out of hand and will be easily spotted by more advanced hitters. Harris is off to a promising start, but using his angular frame to drive the ball down and developing a sharper breaking ball will determine how quickly he finds success at the upper levels.

Erisbel Arruebarrena: Arguably the front runner for in-house shortstop option to start opening day, Arruebarrena doesn’t miss this list because he is an older import from a foreign professional league, he misses the list because he cannot hit. Arruebarrena has one of the slowest bats I’ve looked at in this organization, and he doesn’t do himself any favors swinging for power as often as he does. Arruebarrena made a number of flashy plays during his call-up, but it remains to be seen just how valuable he’ll be defensively. The answer will have to be Gold Glove worthy to justify playing him, because he will not hit consistently over his career. Erisbel might have to make his living caddying for the hulking Seager at short, hoping for one positive BABIP year to give him a .270 average to entice the next team into giving him an extended chance.

Hopefully, this list will only see additions as opposed to many subtractions this off-season, as the Dodgers look to re-align payroll and clear out the outfield roster jam. Nevertheless, if a player or two depart, I will write profiles on the players moving onto the list. Likewise, if the Dodgers make prospect additions in the form of a trade or international signing that would rank somewhere within the top 20, I will write up a new profile and adjust the rankings. My goal is to let the list expand organically to 30 players (perhaps beyond) as players get added to the organization. So, if Andre Ethier nets the Dodgers a solid Double-A arm with No. 3 upside, he’ll get a write up and the rankings will expand to 21. I likely won’t do a full re-rank until immediately after the draft, and will go back and evaluate the players just missed or left off for missing information.

Like more famous prospect lists, these rankings will be fluid and for good reason. Players get hurt, players lose confidence and decline, players acknowledge their weaknesses and improve them. The best example of the latter while following Colorado was Nolan Arenado. Nolan was not the greatest of athletes upon being drafted, and had a body that if not kept up, could push him across the diamond or to left field. When Nolan finally reached Tulsa, he was noticeably trimmer than his draft videos and had started to mature physically. Defensively, Arenado had a flair for the dramatic but his footwork and merely average reactions would occasionally make the routine plays less so. By the time Arenado had reached the majors, he had put even more work into improving his agility, first step quickness, and concentration to become a consistently stellar defender. As players adapt (or fail to do so) to the challenges they face climbing the ladder, we want to recognize it through these rankings.

Those adjustments will come in time, but today is about taking a snapshot of the organization as it appears, to me, right now. Look for the profile for the No. 20 prospect later this week.